A Youth Job Skills Program Is Building Futures in Bangladesh

Hundreds of thousands of desperate and terrorized ethnic minority Rohingya Muslims — more than half of them children — flooded out of Myanmar's Rakhine state into southern Bangladesh in 2017, bringing with them accounts of the unspeakable violence and brutality that had forced them to flee. Today, almost a million Rohingya refugees are living in camps and settlements in Cox's Bazar, Bangladesh. Daily life is dominated by the search for food and water, and coping with difficult, sometimes dangerous living conditions.

For the half a million young people growing up in the camps, many still traumatized by their escape from Myanmar, the future is full of uncertainty.  In Myanmar, most Rohingya have no legal identity or citizenship. In Bangladesh, children are not registered at birth, so they lack both a legal identity and a refugee status. Until conditions in Myanmar improve, Rohingya children and young people remain a stateless minority, excluded from formal schooling and desperately in need of marketable skills.

Older children and adolescents who are deprived of opportunities to learn or make a living are at real risk of becoming a "lost generation" vulnerable to exploitation and trafficking. Girls and women without education or job skills are at particular risk of sexual and other gender-based violence, including being forced into early marriage. 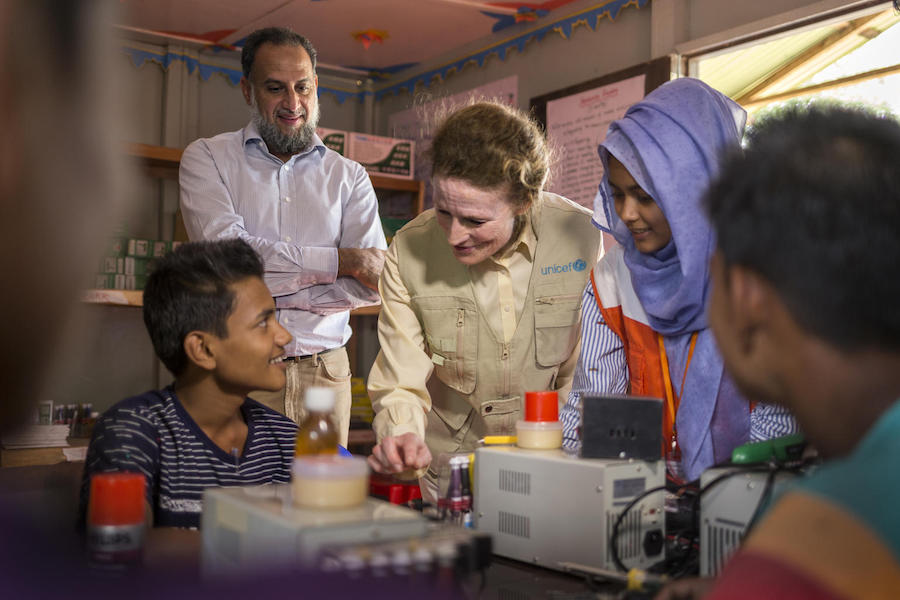 "The obligation we have as a global society is immense: to give children and young people the world has defined as 'stateless' the education and skills they need to build decent lives for themselves," said UNICEF Executive Director Henrietta H. Fore (above, center).

UNICEF is now reaching 155,000 children between the ages of 4 and 14 with a learning program to increase their foundational skills in literacy and numeracy, and partnering with Bangladeshi NGO BRAC to provide essential skills training to young people between the ages of 15 and 24 in Rohingya refugee camps and the surrounding communities. In February 2019, ED Fore and the United Nations Secretary General's Humanitarian Envoy, Ahmed Al Meraikhi (above, standing), visited Cox's Bazar to see the program in action. At the World Vision multi-purpose adolescent center in Tenkali Rohingya refugee camp (above), young people are learning how to repair cell phones. 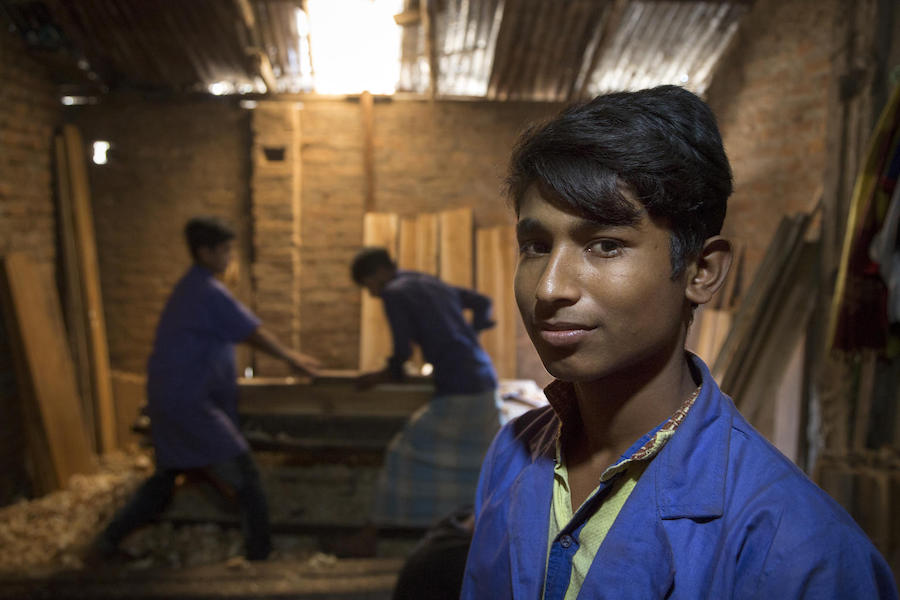 The vocational training program offers a number of job skills training courses, along with internships in local businesses in Cox's Bazar, one of the poorest districts in Bangladesh. Sixteen-year old Mohammad (above) and his fellow students are learning carpentry skills in a woodworking shop in Court Bazar. ED Fore received a sewing lesson from Rafika, 25, a Rohingya mother with four young children who is developing her skills at the UNICEF-supported Safe Space for Women and Girls in a Rohingya refugee camp. 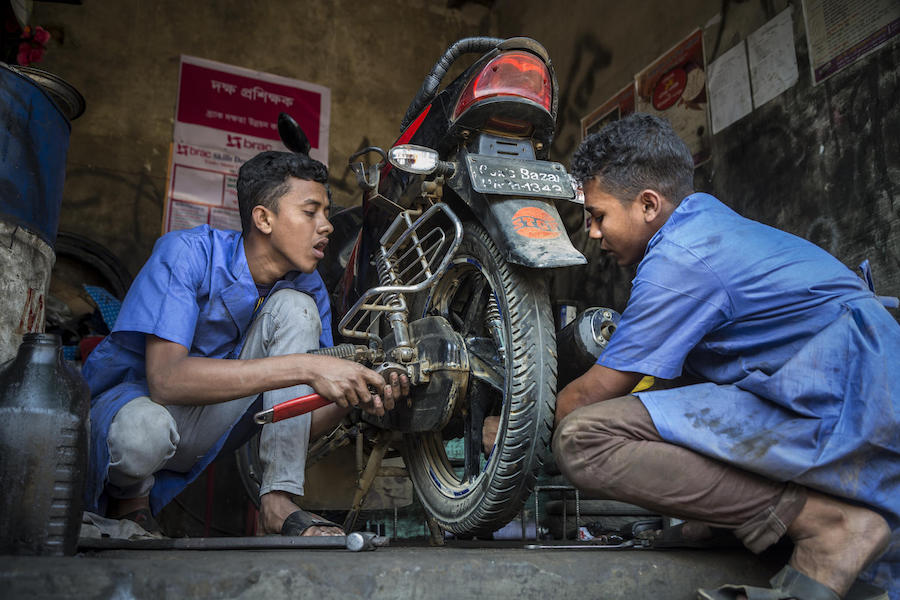 Mohammed Forhad (above left) and Biplob Barca, both 18 years old, work on a motorbike in a garage in Court Bazar. Bangladeshi youths who have not completed high school are eligible for a number of courses in a training center as well as internships with local businesses. 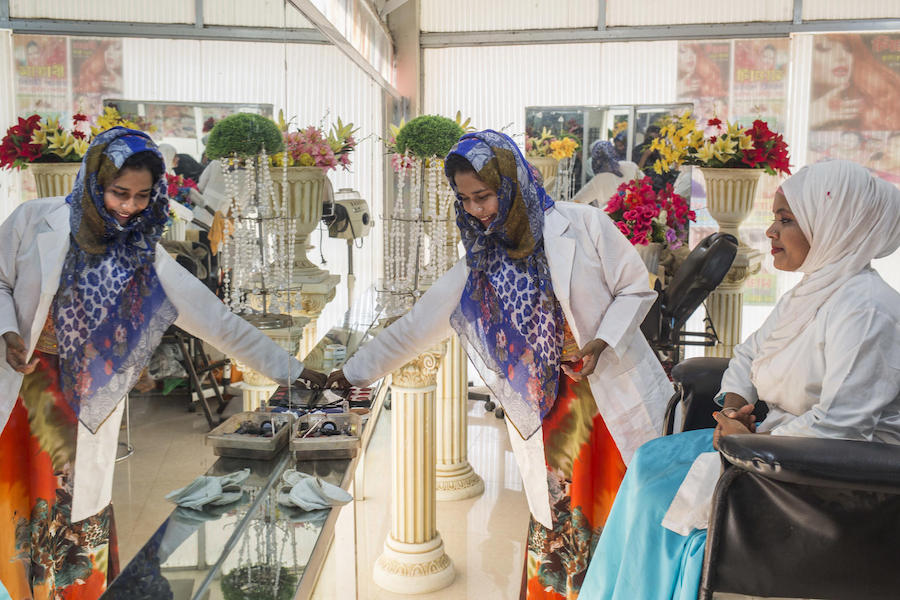 The young women above are learning makeup and hairstyling techniques during their internship at a beauty parlor in Ukhiya, Cox's Bazar. 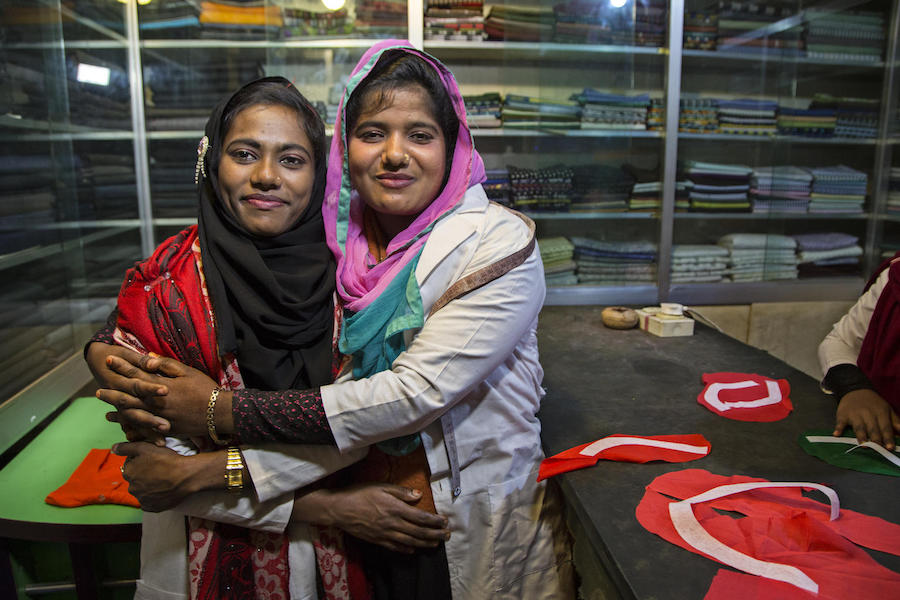 Jannatu, 17 (above left), and Rajia, 18, are training to become tailors at a shop in Ukhiya. Empowered and equipped with the job skills they acquire in the UNICEF-supported training program, these young people will be better able to provide for themselves and their families. UNICEF Bangladesh is appealing for $152 million in 2019 to provide 685,000 Rohingya refugees and host community residents with critical support.

Please support UNICEF's work on behalf of children and young people around the world.

Top photo: Sura, a young Rohingya refugee learning to make dresses, measures UNICEF Executive Director Henrietta H. Fore at a UNICEF-supported Adolescent Center in Cox's Bazar, Bangladesh. UNICEF has partnered with the Bangladeshi NGO BRAC to create a vocational training program for young people growing up in Rohingya refugee camps and young people who live in the surrounding area. © All photos by Roger LeMoyne for UNICEF