Empowering girls through education is the key to realizing their rights and potential to become active citizens who can build a better world.

UNICEF USA welcomes today's passage of H.R. 2153, the Keeping Girls in School Act, by the U.S. House of Representatives. Evidence shows that a quality education positively impacts girls' health, safety and economic prosperity. Too often, girls are kept out of school by child marriage, social discrimination, harassment and violence. This bipartisan legislation would harness the power of U.S. foreign assistance to address the barriers girls face in accessing school through smart investments and coordination between U.S. Government agencies.

UNICEF USA commends the leadership of Rep. Lois Frankel (D-FL) and Rep. Susan Brooks (R-IN) for re-introducing this measure in March 2019 and continuing to champion the bill up until this vote. We also applaud Rep. Nita Lowey (D-NY) and Rep. Brian Fitzpatrick (R-PA), who both originally co-sponsored the bill, for their commitment to protecting girls' right to education.The bill unanimously passed through the House Foreign Affairs Committee in October 2019 and has 115 bipartisan cosponsors. 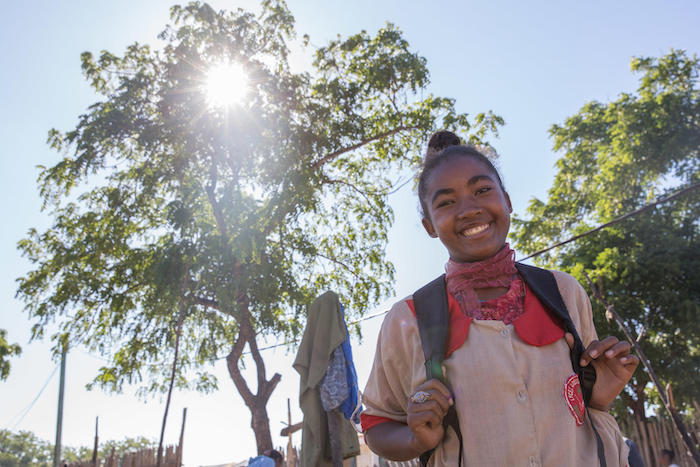 Olivia, 16, was forced to drop out of school after giving birth to her son, Safidy, at age 15 in Amboasary, Anosy region, Madagascar. She has resumed her education thanks to a life skills program implemented by UNICEF and government and civil society partners. More than half of girls in the Anosy region are married or in union before the age of 18, and more than 1 in 3 girls have a child before their 18th birthday. © UNICEF/UN0325674/Ralaivita

In order to become law, this measure must also be approved by the U.S. Senate. UNICEF USA calls on Senate Foreign Relations Committee Chairman Jim Risch (R-ID) and Ranking Member Bob Menendez (D-NJ) to advance this critical legislation that would leverage innovative financing and partnerships to positively impact girls' access to quality education. We now need your support in the Senate. Clarisse was out of school for nearly three years after her family fled a secessionist rebellion in the Northwest Region of Cameroon. Now she attends class at the GEPS Youpwe, a UNICEF-supported government primary school in Douala, along with 200 other internally displaced children, including her siblings Jemima, Timothy and Titus. © UNICEF/UN0329166/Bindra

As a core part of UNICEF's thematic work, UNICEF prioritizes investments in education for the most vulnerable — including girls — to ensure that every child has an opportunity to develop knowledge and skills they need for life and work. In addition to supporting this legislation and working with decision-makers, UNICEF USA remains committed to supporting UNICEF's global work to help educate girls around the world.

Ask your Senators to support legislation that keeps girls in school around the world.

Top photo: On December 3, 2019, Nabyla (name changed), 13, attends class in at a UNICEF-supported school in Kaya, Burkina Faso, where her family found refuge after armed groups invaded their village, kidnapping and killing people. Out of school for seven months, she's happy to be back in the classroom. "It makes me forget the fear I felt with the armed men," she says. "One day, I would like to become a nurse to take care of my family." © UNICEF/UNI280376/Tremeau