The new Migrant Services Partnership seeks to expand legal, mental health, psychosocial support and other services for asylum-seeking children and families on both sides of the U.S.-Mexico border.

UNICEF USA and the Hispanic Federation (HF) are teaming up to meet the growing needs of children and families on the move who continue to face threats to their health, safety and well-being.

The main goals are to improve access to critical mental health and psychosocial support services and legal services. Through advocacy and capacity building, the partners hope to be catalysts for change in the region.

A partnership focused on scaling up services for vulnerable children and families on both sides of the U.S.-Mexico border

"We are thrilled to launch this new partnership," UNICEF USA President and CEO Michael Nyenhuis says. "What's exciting about it for me is that we will be able to address this crisis on both sides of the border ... [and] deliver real benefits to children and families in need. This is a significant effort by both organizations." 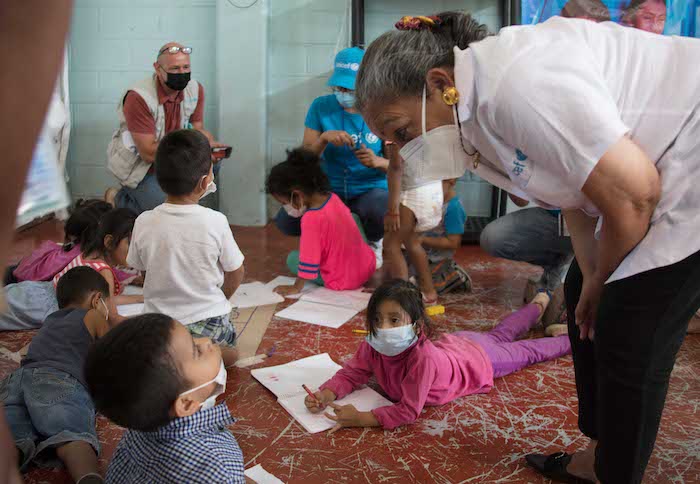 Jean Gough, UNICEF Regional Director for Latin America and the Caribbean, visited with migrant children at a UNICEF-supported Child-Friendly Space in Ciudad Juárez, Chihuahua, Mexico during a five-day visit in April 2021 to migrant shelters along the U.S.-Mexico border.  “Most of the shelter facilities I visited in Mexico are already overcrowded and cannot accommodate the increasing number of children and families migrating northward," Gough said. "We are deeply concerned that living conditions for migrant children and mothers in Mexico could soon deteriorate further." © UNICEF/UN0443658/Kelly

HF President and CEO Frankie Miranda noted the increasing demand for services in the region. "We know from UNICEF's numbers that 275 children are entering Mexico every single day," he says. "All of these children are going to need services and assistance. We know that we need to come together with this humanitarian response."

Migrant families and unaccompanied children, mostly from Central America, are fleeing situations of extreme violence, poverty and discrimination. Upon their arrival in the U.S. or Mexico, children are often placed into detention centers or large-scale shelters that do not meet their needs. COVID-19 has intensified the need to find suitable care situations for these children on the move.

The new Migrant Services Partnership seeks to leverage decades of expertise in both organizations' respective focus areas: UNICEF in providing guidance and advocacy to government, comprehensive psychosocial support and other case management activities for children in Mexico; and HF in providing legal services, capacity building, public education and advocacy activities in the U.S. 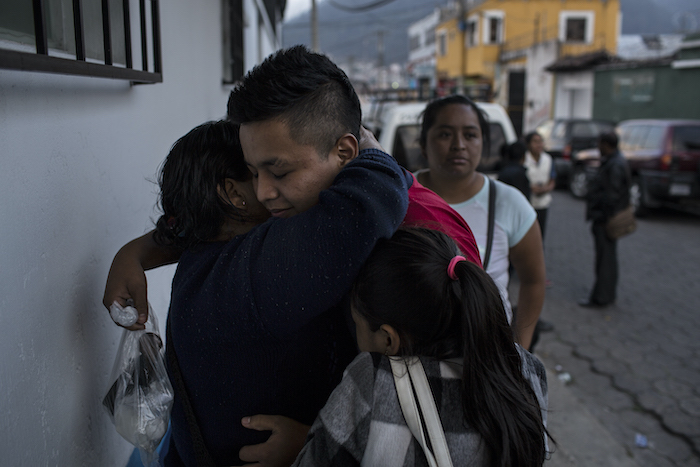 A family reunites at a government reception shelter in Quetzaltenango, Guatemala. © UNICEF/UN0217796/Bindra

UNICEF has been working in Mexico since 1954. In 2019, UNICEF Mexico opened two field offices at the southern and northern borders of Mexico, and added staff in Tapachula, Chiapas and Tijuana, Baja California. The teams have been focusing on supporting frontline child protection authorities,  expanding family and community-based shelters as alternatives to detention and improving shelter capacity to accommodate families with small children as well as unaccompanied children.

HF has been defending and supporting immigrants in the U.S. since 1990. In response to COVID-19, HF shifted its immigration services to the virtual space. Post-COVID, HF’s investment in service technology will provide enhanced and efficient services to immigrant clients. The organization's many programs and initiatives have helped tens of thousands of immigrants integrate into American society.

UNICEF USA and HF have been working together since 2016, supporting Central American migrants staying at shelters in Mexico and other communities in crisis. In 2017 they teamed up to help families in Puerto Rico who were affected by Hurricane Maria, and again in 2018 to support relief efforts following the Fuego volcano eruption in Guatemala.

A critical time for asylum seekers

The launch of the Migrant Services Partnership comes at a particularly critical time, when asylum cases and migration policies are rapidly changing. Along the northern Mexican border, the Migration Protection Protocols (MPP) — commonly known as the “Remain in Mexico Policy” — has resulted in over 70,000 asylum seekers forced to wait out their asylum process in Mexico. As a result of MPP, the influx has severely strained the capacities of Mexican authorities to provide protection and a comprehensive humanitarian response to children and their families. 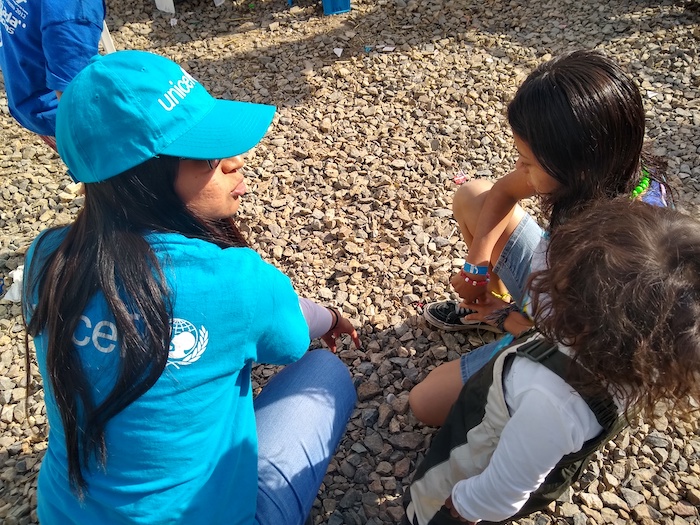 In 2019, nearly 52,000 migrant children were detained in Mexico, including 11,866 children traveling without a parent or caregiver. Over 34,700 children were returned to their countries of origin, back to the unsafe conditions they had hoped to escape. Other children were placed in detention facilities.

In late 2020, Mexico banned the detention of migrant children, recognizing the harm it does to children. This provided a legal opening for UNICEF and others to scale up alternative care options.

The Biden-Harris Administration has begun to phase out MPP, partnering with UNICEF and other international organizations to help migrant families with active MPP cases to travel back to the U.S. for the remainder of their legal proceedings. There are potentially thousands of non-MPP asylum seekers in need of assistance as well. 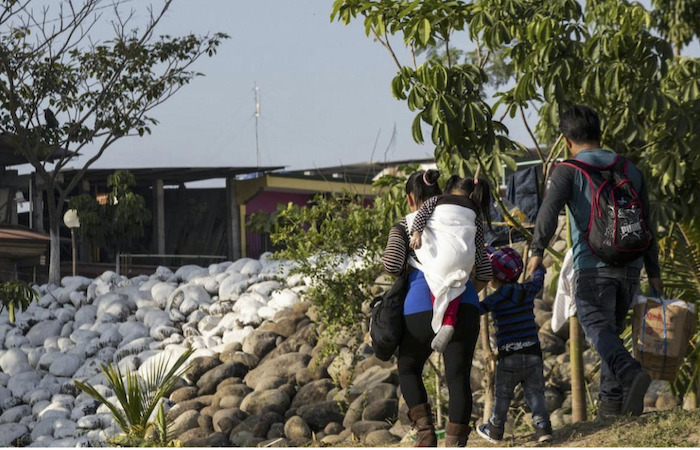 A family crosses the Suchiate River at the Mexico-Guatemala border near Cuidad Hildalgo, Mexico. © UNICEF/UN0278763/Bindra

The COVID-19 pandemic and back-to-back hurricanes devastated the already fragile region, particularly El Salvador, Guatemala and Honduras, prompting a surge in the numbers of children and families migrating north. Many are fleeing violence and other unsafe conditions in their home countries, conditions that have only gotten worse as a result of rising poverty and the effects of climate change.

Even under the most optimistic scenarios and most humane policies, the needs are overwhelming.

Fewer than 5 percent of those who arrive in the U.S. are able to obtain legal representation as they apply for asylum or other legal protections. Food, transportation and housing are all difficult to come by as they go through what can be a years-long process.

About one-third of all asylum seekers are children

It is estimated that about one-third of those seeking asylum are children. Many suffer from post-traumatic stress disorder, depression and anxiety due to the dangers they faced during their journeys north, the violence and poverty they experienced in their home countries and uncertainty about the future. Unaccompanied children and others who become separated from their families are also at high risk of psychological harm. A father and his child walk through a tent city serving as a temporary shelter for migrants in Tijuana, Mexico. UNICEF and partners are working to provide social, legal and child protection services to migrants on both sides of the U.S.-Mexico border. © UNICEF/UN0271799/Kelly

The Migrant Services Partnership aims to raise at least $1 million over the next year to fund a range of services and capacity building efforts, including:

UNICEF USA and HF also plan to work with four community-based organizations that have a brick-and-mortar presence in the four U.S. southern border states — California, Arizona, New Mexico and Texas — where increasing numbers of asylum seekers have come after fleeing their countries of origin. 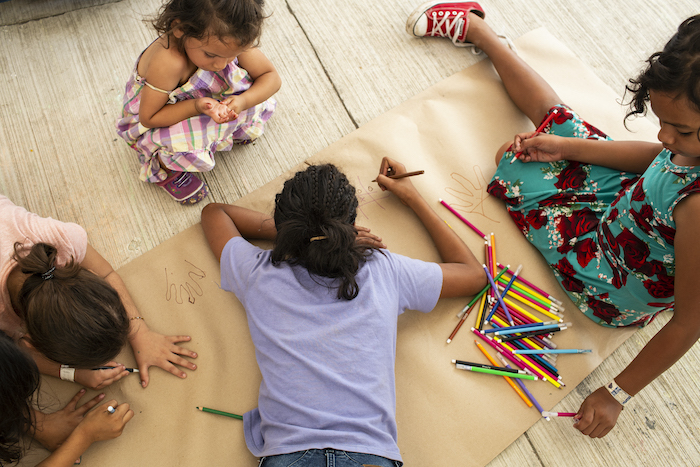 Migrant children take part in a range of activities at the Child-Friendly Spaces that UNICEF helps set up and manage at migrant shelters along the Mexico-U.S. border. © UNICEF/UN0278777/Bindra

The groups would focus on addressing the many connectivity and technology limitations faced by migrant families that are central to the care and protectino services they receive.

With their support, the partners aim to improve overall communication capacities through the use of internet hotspots, computers and mobile devices; establish four designated computer labs in shelters in Mexico, complete with internet capacity, laptops and privacy when speaking with legal representatives; and provide mobile devices to each organization to distribute to individuals they are currently serving. Children play with hula hoops in Chiapas, Mexico. UNICEF-supported Child-Friendly Spaces provide a safe place for children to play and reclaim a sense of normalcy. © UNICEF/UNI178926/Ramos

Support UNICEF's critical work and help transform the landscape of care and protection for asylum-seeking children and families on both sides of the U.S.-Mexico border. Every child deserves to feel safe, secure and protected.

Top photo: A UNICEF-supported volunteer plays with children at the St. Augustine hotel, a shelter for refugees and asylum seekers in Tapachula, Mexico. © UNICEF/UN0278776/Bindra