With no end to the conflict in Ethiopia's Tigray Region in sight, as many as 200,000 people are expected to flee to neighboring Sudan in the coming weeks. UNICEF issues an urgent appeal for support to meet rising needs.

An emergency response is underway in Sudan to meet the urgent needs of over 30,000 refugees from the Tigray region of Ethiopia, where armed conflict broke out earlier this month.

An estimated 12,000 children, some of them without parents or relatives, are already sheltering in the camps and registration centers, where conditions are "extremely harsh," UNICEF Executive Director Henrietta Fore said.

And thousands more are coming in every day — prompting an urgent appeal for support to meet rising needs.

"We are planning for an escalation of up to 200,000 refugees," said Abdullah Fadi, UNICEF Representative in Sudan. "With all of our partners — not only the UN agencies but also the NGOs — we are working closely to ensure that all of the needed assistance is available quickly, but we could soon be overwhelmed."

The needs are immediate, and they are huge," said Abdullah Fadi, UNICEF Representative in Sudan. "We saw panic and fear in the eyes of many of the children.

Top priorities are to provide safe water; sanitation and hygiene supplies to prevent the spread of COVID-19; emergency health care and nutrition. "The needs are immediate, and they are huge," Fadil said. "We saw panic and fear in the eyes of many of the children, especially those who might have witnessed artillery fire or airplanes dropping bombs. We could see that many families fled in a hurry ... Though some have come with their animals, their belongings and harvest, the majority have come with nothing."

Over 2 million children still in Tigray are also at risk

Another 2.3 million children are still inside Tigray with similarly urgent needs — kids who remain out of reach due to restricted access and a communication blackout.

UNICEF and other agencies have called on all parties in the conflict to let aid groups in so they can deliver aid to children and other civilians in need as food and other basics run low.

Malnutrition among children inside Tigray is a major concern. So is the danger that children will be recruited by armed groups and forced to fight. 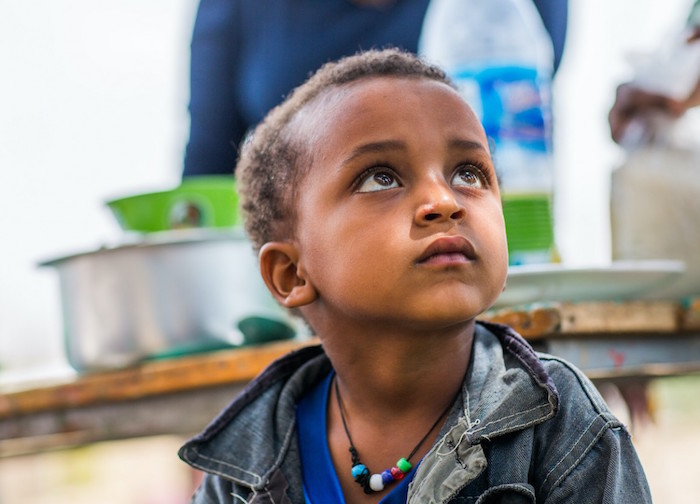 More than 200,000 people are expected to flee violence in Ethiopia's Tigray Region in the coming weeks. An estimated 12,000 children, some without parents or relatives, have already crossed the border into Sudan, seeking safety. © UNICEF/UN024975/Sewunet

Risk of repercussions beyond Ethiopia and Sudan

Sudan is already hosting more than 1.2 million refugees from South Sudan, Central African Republic and a half dozen other countries. Some 2 million Sudanese are internally displaced. The country is facing its own economic crisis, with an inflation rate of over 240 percent and lines for fuel and bread, Fadil pointed out.

"Sudan is burdened with a lot of its own economic and political issues, and having 200,000 more refugees is something it cannot afford," Fadil said. "And yet Sudan has opened its doors to tens of thousands of people. Our serious concern is that what happens here will have repercussions not only for Sudan or Ethiopia but for the entire region. We hope the international community responds."

Help UNICEF deliver emergency lifesaving assistance to Ethiopian refugees and other vulnerable children in need. Your contribution can make a difference.

Top photo: An Ethiopian refugee who fled fighting in Tigray province sits holding a child in a hut at the Um Raquba camp in Sudan's eastern Gedaref province, on November 16, 2020. Over 2 million children in the Tigray region of Ethiopia are in need of humanitarian assistance. UNICEF is calling upon all parties to the conflict to cease fighting and reach a peaceful setttlement and to alllow humanitarian agencies immediate, unimpeded and sustained access to affected communities.  © UNICEF/UN0371488/Hamid/AFP