Standing Up for Child Survivors of Sexual Abuse in Sierra Leone

"When I was a boy, my father used to say to me, 'If you are alive, there is a possibility that something good will happen to you,'" former child soldier Ishmael Beah recalled.

Beah was only 13 when armed rebels attacked his hometown in Sierra Leone, killing his parents and brothers. Forcibly recruited to fight in the country's bloody civil war, he spent years surrounded by extreme levels of violence, just trying to stay alive.

When people wearing blue UNICEF shirts arrived to talk with his commander, he assumed they were a new mercenary group come to join the fighting. Instead, UNICEF negotiated for his release and helped him rebuild his life. His 2007 memoir, A Long Way Gone, chronicles his experience as a child soldier, recovery from the horrors of war and new life in the U.S.

Now a father himself and a UNICEF Goodwill Advocate for Children Affected by War, Beah, 39, returned to Sierra Leone in November to see how UNICEF is strengthening protections for orphaned children and child survivors of sexual abuse. In Sierra Leone's Bombali District, former child soldier and UNICEF Goodwill Advocate for Children Affected by War Ishmael Beah met with orphaned cousins Isatu, 17 (left) and Fatmata, 15, who are receiving support from UNICEF and partners. More than half the people in the girls'  village have died from the Ebola virus. © UNICEF/UNI229264/Tremeau

"Children in Sierra Leone today are growing up in a country that has opportunities and platforms for growth, but many are still missing out," Beah said. "As a child, my rights were stripped away. I'm proud to join UNICEF in defending the rights of children everywhere." 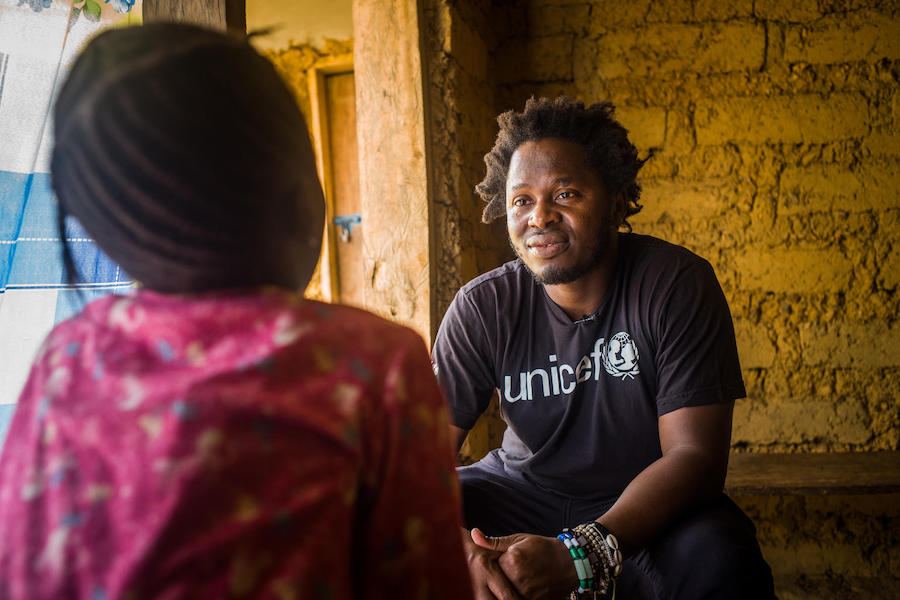 Ishmael Beah talks with 8-year-old Adama*, who was sexually abused by a teacher at her school in Sierra Leone's Tonkolili district. © UNICEF/UNI229289/Tremeau

During his trip, Beah met with 8-year-old Adama*, who told him how she was sexually abused one day during a school lunch break: a teacher, a locked bathroom door, a violent assault. After Adama told her mother what happened, her attacker was jailed and charged in court. He is now serving a 30-year jail sentence. With support from UNICEF, Adama* is receiving counseling and psychosocial support.

"How do you feel now, attending the same school?" Beah asked. "Are you afraid of going back to the school or are you not afraid?"

"I'm glad you told your mom immediately," Beah told her. "Because some children are afraid to report such incidents and then the teacher continues to do these kinds of things and this should not be happening."

A 7-year-old girl recounted a similar experience. Her abuser was a trusted community member who sent her out to buy cigarettes for him, then forced her into his room and attacked her. "My mother took me straight to the hospital and after that, we went to the police and reported the incident," she said.

"It's very heartbreaking," Beah said later. "I have two daughters. My oldest is 5, so she's not too far from the age group of these young girls, 7 and 8. Imagine your child goes to school where it's supposed to be a place that's safe for them and they're supposed to learn and there is a predator waiting there to take advantage of them and ruin their lives in many ways. As a father, it made me really angry. It made me very sad and emotional, but it also made me very angry that these things exist." 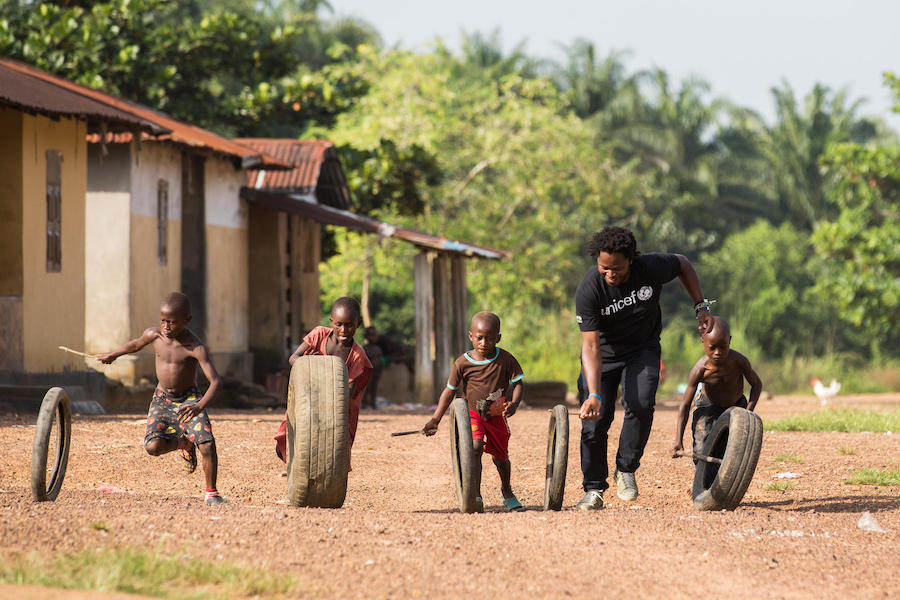 Ishmael Beah's return to the country of his birth was a celebration and a chance to give back to children who need protection. © UNICEF/UNI229263/Tremeau

The nation's civil war has left a lasting impact. Almost half of Sierra Leone's women face sexual or physical violence during their lifetime. In February 2019, after the brutal rape of a 5-year-old girl, Sierra Leone's President Julius Maada Bio declared sexual violence a national emergency and directed state hospitals to care for victims of rape and sexual abuse free of charge. Seventy percent of survivors of sexual assault are under age 15, Bio said at the time. Sex with minors, he vowed, would be punishable by life in prison.

Sierra Leone has made significant progress to improve children's rights and opportunities. But the country's formal child protection systems remain inaccessible to the majority of people; there are only 40 trained social workers nationwide.

UNICEF supports local organizations like Family Homes Movement to provide counseling, support and justice for children in Sierra Leone. Considerable investment is needed to ensure that interventions are widely implemented and effectively protect children who are at risk of sexual violence and other forms of abuse.

For over 70 years, UNICEF has been putting children first, working to protect their rights and provide the assistance and services they need to survive and thrive. With a presence in 190 countries, UNICEF has helped save more children's lives than any other humanitarian organization in the world.

*Names have been changed to protect individuals.