South Sudan Famine Declared: We Must Save These Children

In the world's youngest country, 5.5 million South Sudanese — almost half the population — will face severe food shortages this year.

Three years of civil war, climate shock and a collapsing economy have triggered a famine in northern-central South Sudan, the United Nations announced Monday. A formal famine declaration means people are already dying from hunger. Some 100,000 people are now facing starvation and a further 1 million are on the brink of famine. Over 270,000 South Sudanese children are severely malnourished. "Our worst fears have been realized," said Serge Tissot of the U.N.'s Food and Agriculture Organization.

The East African nation seceded from Sudan in 2011 after decades of conflict that, to date, have driven 3.4 million people from their homes and placed 8 million people in need of humanitarian assistance. An estimated 42 percent of South Sudan's population — nearly 5 million people — are now suffering from severe food shortages, and the number is projected to reach 5.5 million at the height of the lean season in July if nothing is done to curb the severity and spread of the food crisis. 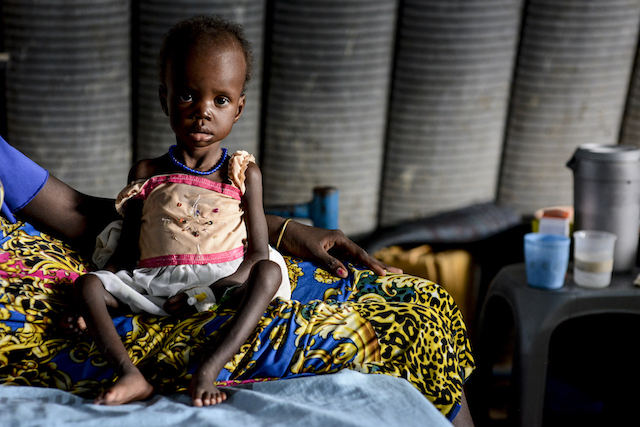 Elizabeth, one and a half years old, is suffering from severe malnutrition. Here she is waiting for treatment at the malnutrition ward in Al Shabbab hospital in Juba, South Sudan. © UNICEF/UN053477/Sebastian Rich

Half of all harvests have been lost

Many farmers have been unable to plant crops amidst the violence, and half of all harvests have been lost. Food is scarce in this once fertile country.  "Over a quarter of a million children are already severely malnourished," said Jeremy Hopkins, a UNICEF official in South Sudan. "If we do not reach these children with urgent aid, many of them will die." 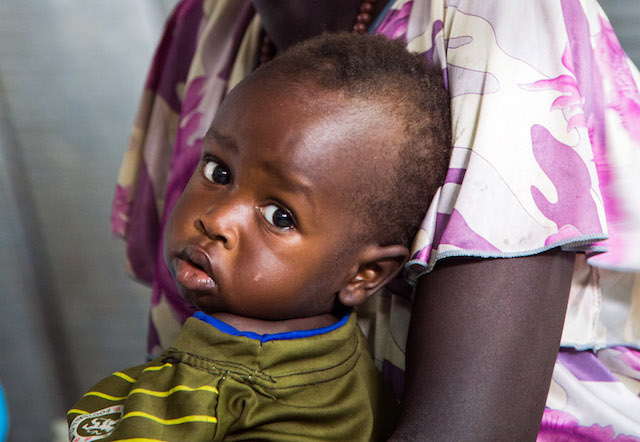 Goanar, a 10-month-old boy with severe malnutrition, is being treated at the malnutrition ward of the clinic run by the International Medical Corps (IMC) in the U.N. Protection of Civilians (PoC) site in Juba, South Sudan. © UNICEF/UN053477/Gonzalez Farran

Where it is most urgently needed, UNICEF is delivering  aid

UNICEF is on the ground, working to help the children of South Sudan. In 2016 alone, UNICEF and partners treated 182,545 children under the age of five for severe acute malnutrition and vaccinated 443,289 children against measles. UNICEF is supporting 620 outpatient therapeutic program sites and about 50 inpatient therapeutic sites across the country to provide children with urgently needed treatment.

But there is much more work to do.