Massive flooding. Displacement. Rising poverty. Hunger. The compounded effects of South Sudan's overlapping and interrelated crises amount to one of the world's gravest humanitarian emergencies. Rising rates of malnutrition and malaria among other preventable childhood diseases — the fallout from years of severe flooding brought on by climate change — have eclipsed concerns about COVID-19. UNICEF is there — but more support is needed to save and protect the most vulnerable children.

A decade ago, South Sudan declared its independence and started on a path to what many believed would be a better, more stable future. Two years later, the new nation erupted into civil war, and the country has been in crisis ever since.

Today, a new peace agreement has been signed and a transitional government is in place. Life, however, continues to be one of extreme hardship and deprivation for millions of South Sudanese children and their families.

"We have one child out of 10 that dies before the age of 5, and they don’t die from COVID-19,”  UNICEF communications officer Yves Willemot told Lynsey Addario, who vividly captures the horrors so many families are facing in her recent coverage for the New York Times and National Geographic.

Two out of three children in South Sudan are now in desperate need of humanitarian assistance. Some 60 percent of the population cannot get enough food. Rates of severe acute malnutrition among children have hit peak levels.

"South Sudan is one of the worst humanitarian crises in the world — and the most forgotten," says Mads Oyen, UNICEF’s chief of field operations in South Sudan. "More than ever, the children in the youngest country in the world need donors to support them so they can enjoy their rights – and just be children." 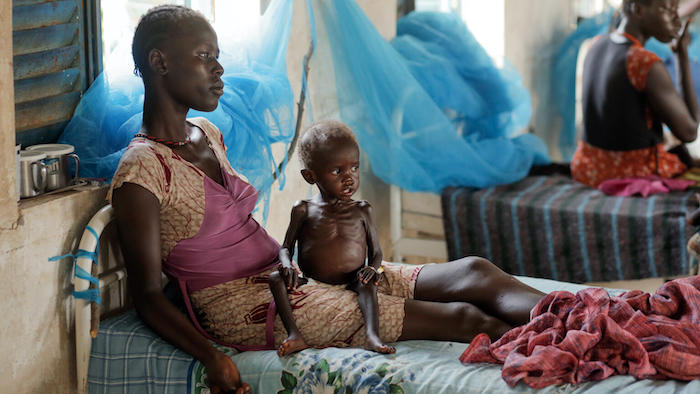 Joice, 17 months, rests with her mother, Sunday Nyabok, at a UNICEF-supported treatment center in Pibor, South Sudan, where children suffering from severe acute malnutrition can receive therapeutic care and related support. The family fled ongoing violence in Gumuruk after their home burned down and they were left without food and water. It took them two days to walk to Pibor. © UNICEF/UN0475195/

The situation in South Sudan is not sudden nor is it a surprise. It is the cumulative effect of years of prolonged conflict, chronic vulnerabilities, limited essential services and weak governance. Social and economic vulnerabilities have been further challenged by plummeting oil prices, huge inflation and climate change.

The COVID-19 pandemic is also a contributor, but concerns about the coronavirus — and vaccinating the population against it — are for many not a primary concern. 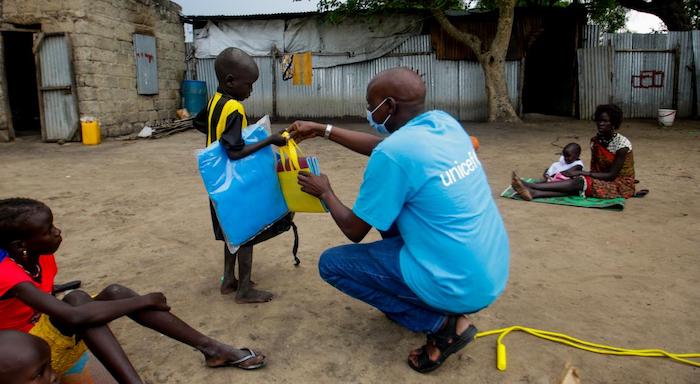 Bachuy Kier, who runs UNICEF's child protection programs in Pibor, South Sudan, hands a reintegration kit containing clothes and a mosquito net to a child who is about to be reunited with family members. © UNICEFSouthSudan/Obel

Persistent, extreme droughts and floods have ruined farmlands, destroyed homes and restricted the availability of safe water. Over 1.6 million people are internally displaced and another 2.2 million are living as refugees after fleeing violence or natural disaster — or both.

As conditions deteriorated, child abductions — which had become common during the civil war — have dramatically increased. Girls (and women) are often taken to be raped; boys are taken to be trained for fighting and cattle raiding. There were an estimated 680 cases of abduction in 2020 alone. 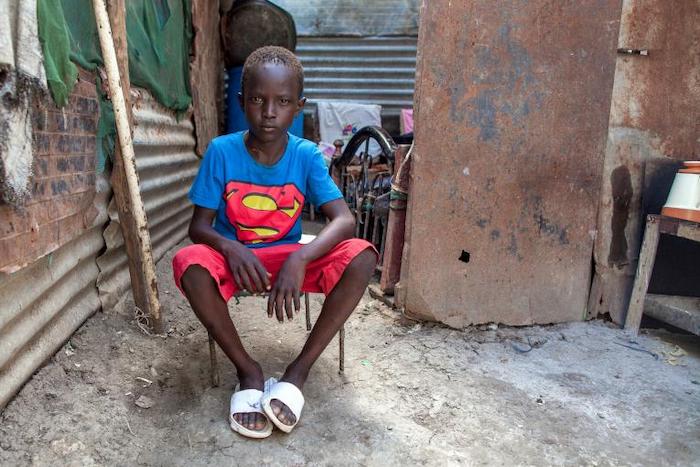 With UNICEF's help, Chogi, 10, was reunited with his mother after five years of separation. © UNICEF/UN0475217/Naftalin/UNICEF

UNICEF works with partners to help identify and negotiate the release of children who are victims of such violence, exploitation and abuse and provides them with psychosocial support and family tracing services to reunite them with loved ones. UNICEF has helped reunite 6,000 children with their parents since 2013, but there are thousands more still waiting.

To address South Sudan's nutrition crisis, UNICEF and partners have scaled up both treatment and prevention programs in the worst affected areas. Through these interventions, UNICEF provides therapeutic foods, lifesaving medicines to treat common childhood illnesses and medical supplies to 1,145 stabilization centers nationwide.

The response has produced some positive results. During the first half of this year, UNICEF and partners reached over 90,000 children with severe acute malnutrition with treatment, with a recovery rate of over 95 percent. 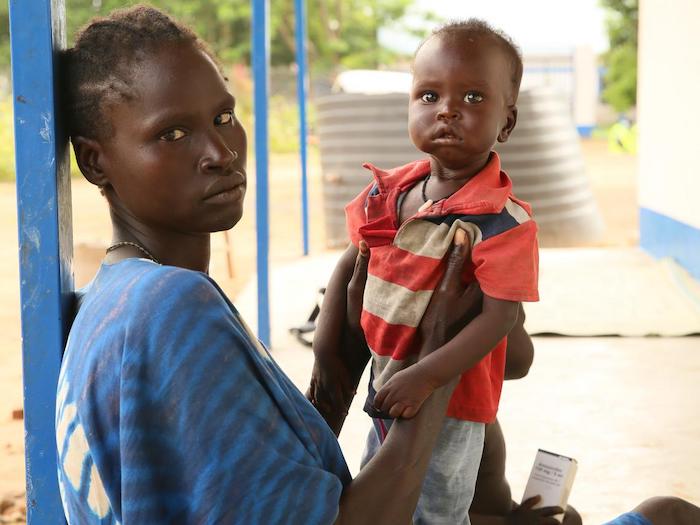 Bulo, photographed with his mother, recovered from severe acute malnutrition after receiving emergency treatment at a UNICEF-supported stabilization center in Aweil. © UNICEFSouthSudan/Giri

In collaboration with the Ministry of Health, UNICEF also supports the training of community nutrition workers who, much like community health workers, are on the front lines offering services and support to children and families in areas most affected by rising food insecurity.

Nutrition workers are trained to detect malnutrition and provide treatment referrals. They also counsel mothers and caregivers on best feeding practices — including how to make a nutrition meal out of whatever limited resources are available — and the importance of breastfeeding, ideally until a child is 2.

Community nutrition volunteers in their uniforms at the Malualkon Stabilisation Centre.jpg UNICEF-supported residential treatment centers in South Sudan take in kids suffering from severe acute malnutrition who require urgent care. At Maluakon stabilization center in Aweil, there is a doctor on call and a registered nurse specially trained in child health; they are supported by a team of community nutrition workers, above, who are trained in malnutrition detection and can provide referrals to the center for treatment. © UNICEFSouthSudan/Giri

Christine Saida Andrea, a UNICEF Child Reporter from Juba, recently spent some time in Pibor visiting with children and their families at a nutrition treatment center and speaking with students at a primary school.

“The children are experiencing the bitter side of the world at a very young age, their rights are being denied, they are the victims of all the chaos happening in Pibor and across South Sudan," Andrea writes in her first-person account. "They want to be educated and have a better future but the environments they live in do not support that." 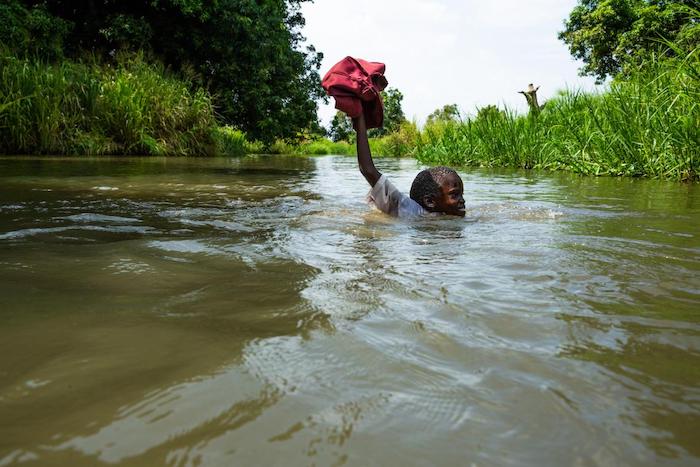 A student swims across a flooded path on his way home from school in Walawalang village. © UNICEF SouthSudan/Chol

UNICEF Child Reporters Hellen Alison, Biong Achiek and Wendy Macar encountered similar hardships during a recent visit to Walawalang, a village in Juba. "Here children and their families are just surviving," they report. "They don’t know whether they will eat today or not. Going to school and attending lessons is no longer a priority in this kind of situation. In Walawalang parents are struggling to pay for a boat for their children to cross the river to reach a school that is not flooded. Some children take off their uniforms and cross the river by swimming holding their uniforms on the top of their heads." 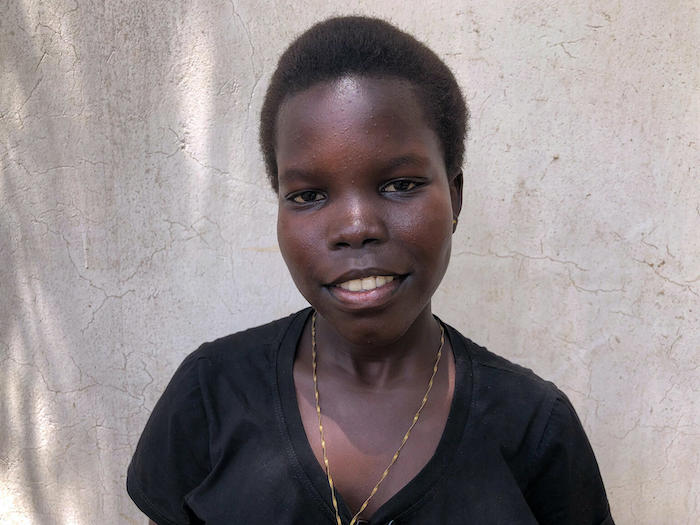 Zikra Gibriel Alfred, 17, a UNICEF Child Reporter, has been vocal about issues like child marriage and other hazards for girls in South Sudan. © UNICEF/UN0475225/

Getting girls to return to school after COVID-19 pandemic-related closures remains a challenge.

"You find girls three times more likely to die due to [complications from] childbirth than complete Primary Eight," UNICEF Child Reporter Zikra Gibriel Alfred, 17, writes. "Most girls drop out of school because of poverty and lack of support in the family. Our parents use us as a source of income through dowry. They force us to marry early without asking us our choices and opinion... We are suffering."

Andrea remains hopeful, however: "I have faith that 10 years from now, things will be better," she writes. "When we celebrate our 20th year of independence in 2031, things won’t be the same because we, the children today, are going to make sure that children in the future won’t experience what we are experiencing."

Learn more about the humanitarian crisis in South Sudan.

Top photo: Christine Saida Andrea, a UNICEF Child Reporter, photographed during a visit to a UNICEF-supported stabilization center in Pibor, Jonglei state, South Sudan. The center provides treatment for children suffering from severe acute malnutrition. Andrea shared what she learned during a recent visit to the center and to a school where she spoke students about their hardships but also their hopes for the future. Read Andrea's first-person account, A Better Life Denied.  "Most people survive from humanitarian assistance provided by the donors," Andrea says. "This is what South Sudan needs the most." © UNICEFSouthSudan/Aldo