In Photos: Building a Brighter Future for Sierra Leone’s Children

Earlier this month, I traveled with a group of UNICEF USA donors and staff to Sierra Leone. Amidst a backdrop of the deepest poverty I’ve ever witnessed first-hand, I was heartened by two things: upliftingly hopeful children and incredibly dedicated UNICEF field staff.

Over the course of five days and two regions, our team was privileged to experience the full scope of UNICEF’s lifechanging programming in Sierra Leone – from water wells at schools to the support of children orphaned by Ebola; from early childhood development to community-led sanitation projects; from education around the dangers of child marriage and early pregnancy to vital health services for mothers and their babies. 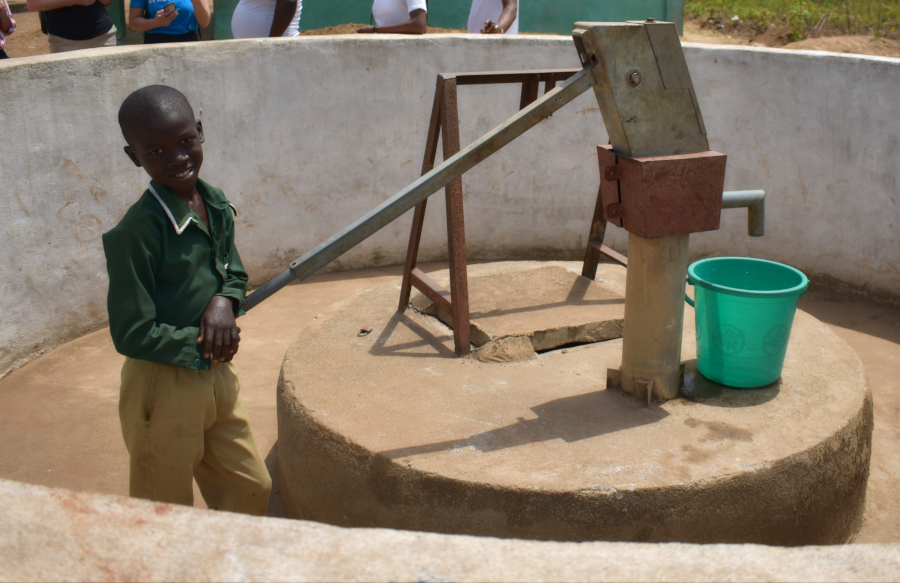 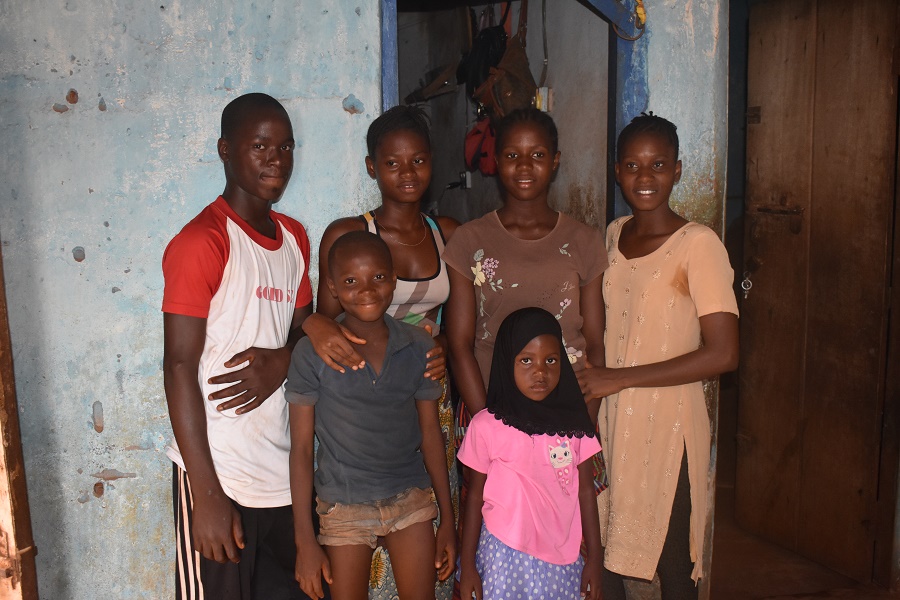 18-year-old Fatima Kamara (right) and her five siblings lost their mother and father to Ebola in 2014. Fatima was just 14 years old at the time, and her youngest sister had been born just five months prior. The deadly outbreak killed nearly 4,000 people in Sierra Lone between 2014 and 2016; over 12,000 children lost a parent, and 3,241 lost both parents.

Fatima, herself an Ebola survivor, now raises her siblings with support from UNICEF and local partner Family Homes Movement. In addition to receiving essential supplies, the children were assisted in returning to school and reintegrating into their community of Willington, Eastern Freetown. 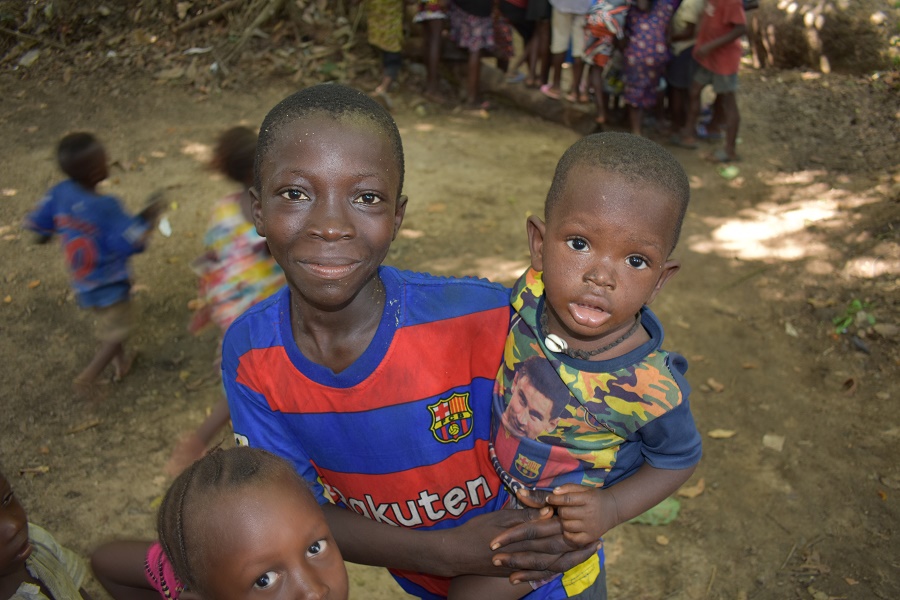 A boy carries his younger brother. Their village of Kamaworan, Bombali District, was recently declared Open Defecation Free as a result of the successful implementation of the Community Led Total Sanitation program by UNICEF and partners. The program supports the community in creating sustainable hygiene facilities out of locally available materials. Many rural communities across Sierra Leone lack proper sanitation, significantly increasing the risk of diarrhea, cholera, and typhoid. Sierra Leone has the highest maternal mortality rate in the world. Community Health Workers like Lucy and Sheku Mansaray are essential to ensuring the survival of mothers and their babies. Each day, they visit their neighbors’ homes in Tambiama, Bombali District, to check on pregnant mothers, monitor newborns’ growth, and offer treatment for malnourished children. Together, Lucy and Sheku provide lifesaving services to 582 people across 10 villages.

UNICEF and partners have helped The Government of Sierra Leone train and deploy 15,000 Community Health Workers across the country, reaching more than 1.3 million children and 300,000 women with lifesaving interventions each year. 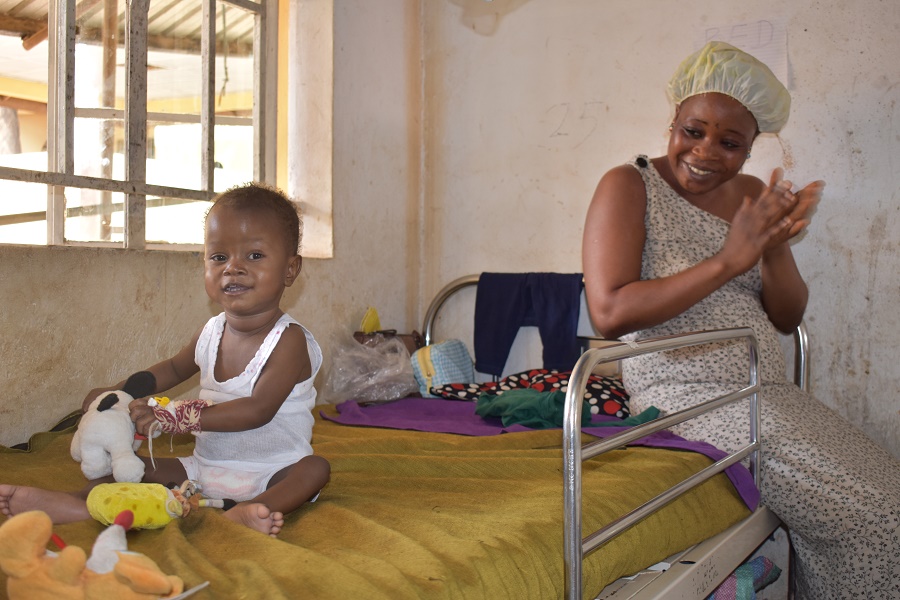 An infant girl named Momo plays at the inpatient children’s facility at the Makeni Government Hospital, Bombali District, as her mother, Aisha, claps along. Momo was born with a large, exposed tumor on her stomach. She was treated in hospital’s neonatal unit, newly established by UNICEF, and is now gaining strength in preparation for a surgery to remove the tumor. 30% of women aged 20-24 in Sierra Leone were married before their 18th birthday. At the Tonkolili Seventh Day Adventist School, at-risk girls are offered a safe space to speak with mentors about early marriage and pregnancy. In addition, a curriculum created by UNICEF in partnership with Council of Churches Sierra Leone teaches both girls and boys to champion the importance of delaying marriage and pregnancy throughout their communities. 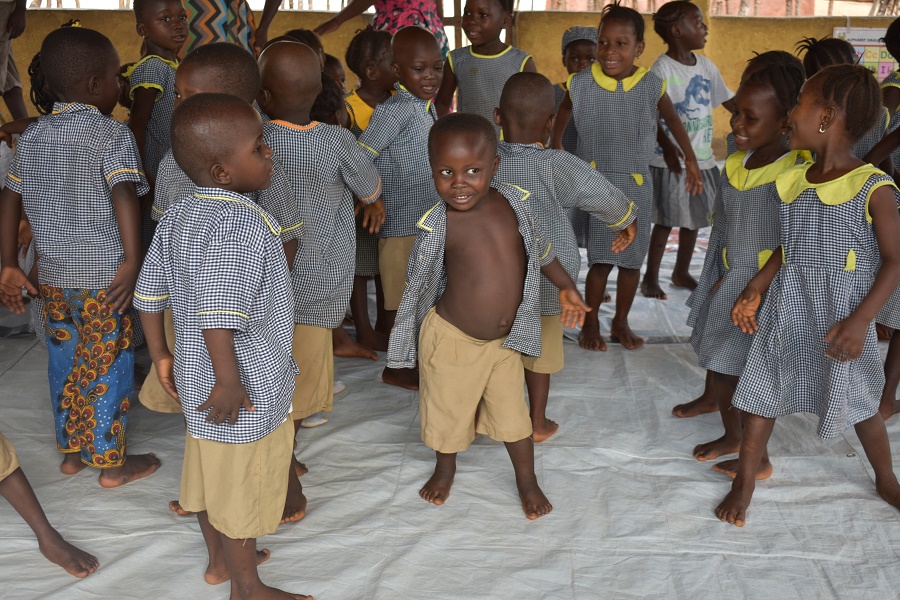 Children dance at the Meferey Early Childhood Development Center, Bombali District. The center implements UNICEF’s recommended play-based approach to early learning. UNICEF is also nearing completion of a new wash room facility adjacent to a larger classroom currently under construction. Soon, even more young children will be able to learn and play in a safe, clean, and educational environment.

Across Sierra Leone, only 12% of children aged 3-5 are attending an organized Early Childhood Development program. To increase access to early learning, UNICEF has piloted community-based Early Childhood Development programs in 32 underserved communities across 4 districts. These programs can have a profound impact on brain development, affecting later learning, earning and health. 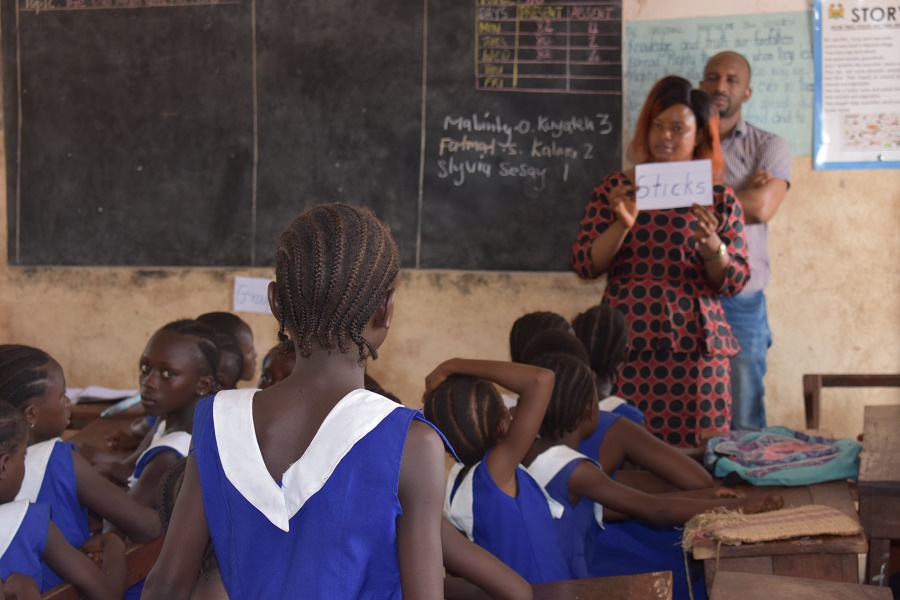 Students practice language arts at the Tonkolili District Education Council Primary School for Girls. UNICEF helped the school implement participatory learning methodologies which include play, music, and dance. Shortly after identifying key words from a short story, a group of girls acted out the narrative to reinforce the class’s understanding.

Girls’ education is a success story for Sierra Leone, with roughly the same percentage of girls attending primary school as boys. But work remains to ensure that every child in Sierra Leone has access to a quality education.

The challenges facing Sierra Leone remain numerous and difficult: maternal and child mortality must improve; families – and entire communities – must be lifted out of poverty; access to safe water and sanitation must expand; children – particularly girls – must be protected from violence and exploitation and enrolled in quality early learning programs. But the children we met during our visit were proud. They were optimistic. And – most striking – they were happy. We owe it to them to match their resilience with our support.

UNICEF, in partnership with the Government of Sierra Leone, community leaders, local aid workers, and our committed supporters, is working day in and day out to build a brighter future for children in Sierra Leone.