This Pandemic Is Not UNICEF's First Fight

UNICEF's role in the world's war against COVID-19 reflects a legacy of saving and protecting children from disease — over a half century of experience not only in treating and preventing it but also alleviating the harm it can do to families, communities and children's futures.

A look back at some of the pivotal moments in UNICEF's long history of tackling global public health crises — precursors to today's pandemic response: 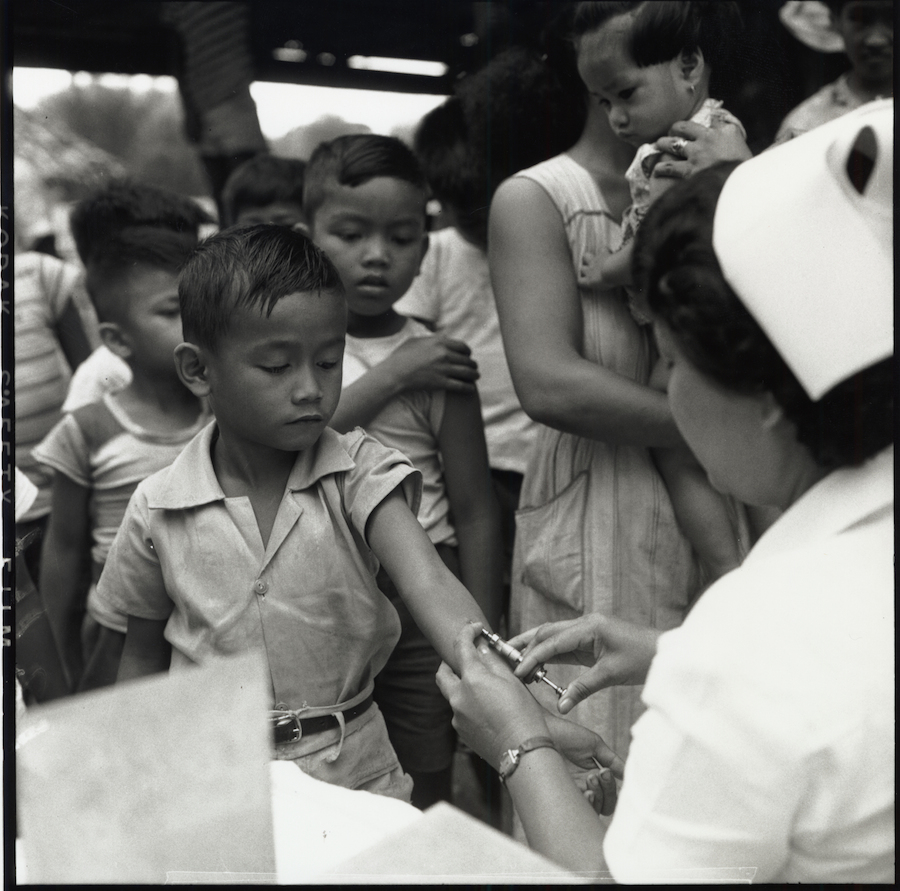 Above, a health worker administers the anti-tuberculosis BCG vaccination to a young boy at a school in Bulacan province, the Philippines, during a UNICEF-supported campaign to immunize 8 million young people against TB. UNICEF contributed medical equipment, vehicles, lab supplies needed for vaccine production and other support to keep anti-tuberculosis programs going. © UNICEF/ICEF-2539 A girl is vaccinated against smallpox by a UNICEF-supported health worker in India. Thanks to global immunization efforts, smallpox was officially declared eradicated in 1979. © UNICEF/UNI41906 UNICEF Goodwill Ambassador Audrey Hepburn, above right, vaccinates a child against polio at a UNICEF-supported health clinic in Bangladesh. Since 1988, polio cases have declined by over 99 percent. Today, UNICEF is actively working with governments and other partners to close immunity gaps created by the COVID-19 pandemic and prevent a comeback. © UNICEF/UNI40108 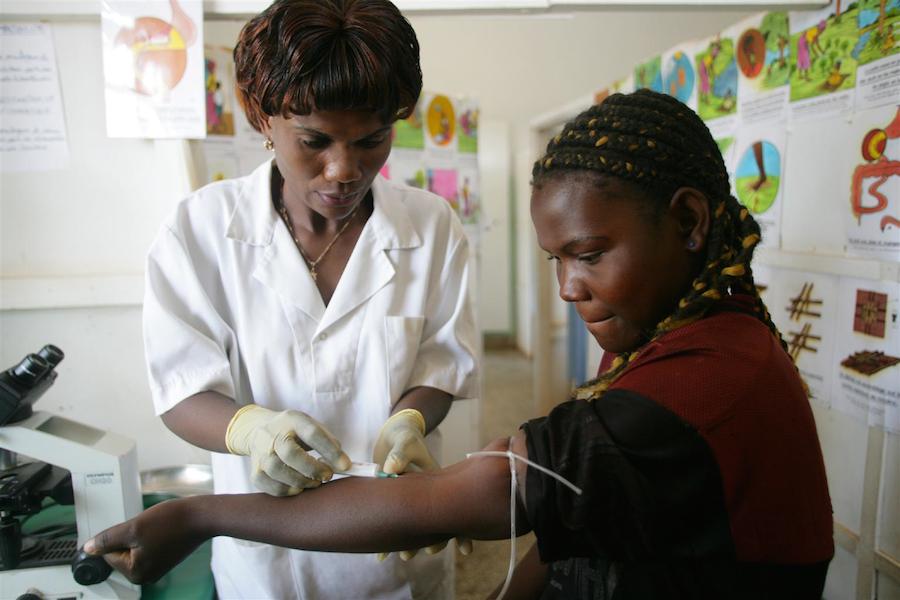 HIV — Democratic Republic of the Congo, 2005

Above, a pregnant woman is tested for HIV at a health facility in Likasi, a town in southeastern Katanga province, Democratic Republic of the Congo. With UNICEF support, the hospital is able to offer voluntary counseling and testing and anti-retroviral therapy for HIV-positive women and their infants. Better services to prevent mother-to-child transmission of HIV averted 2 million infections — and 1.1 million deaths — among children under age 5 between 2000 and 2018. © UNICEF/UNI44463/Pirozzi 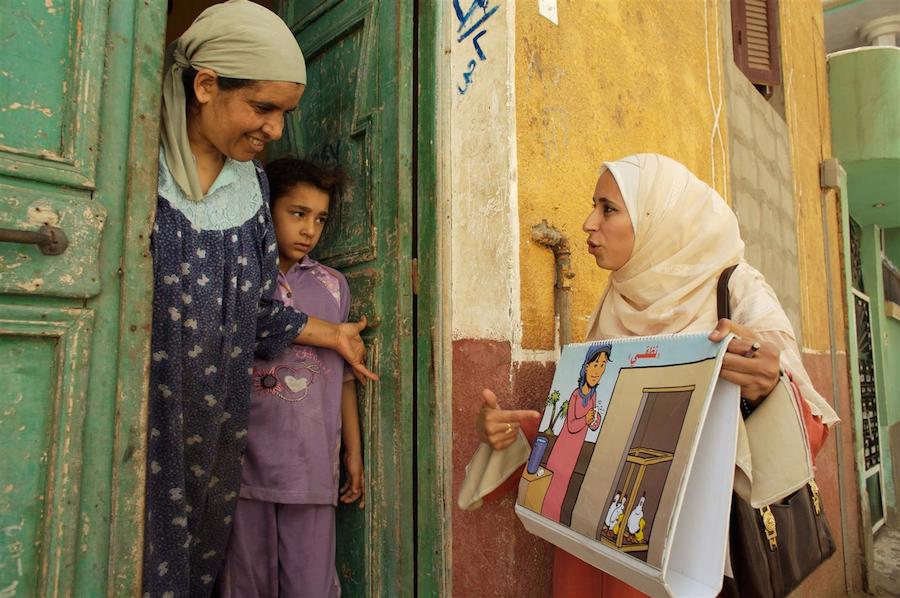 A UNICEF-trained community health worker visits a home in the Mit Ghamr district, Dakahlia Governorate, Egypt to share information on how to prevent the spread of the H5N1 avian influenza virus, or avian flu. UNICEF helped coordinate the government's response to the 2006 outbreak, which included these hyper-local public awareness and education campaigns. © UNICEF/UNI2434/Noorani 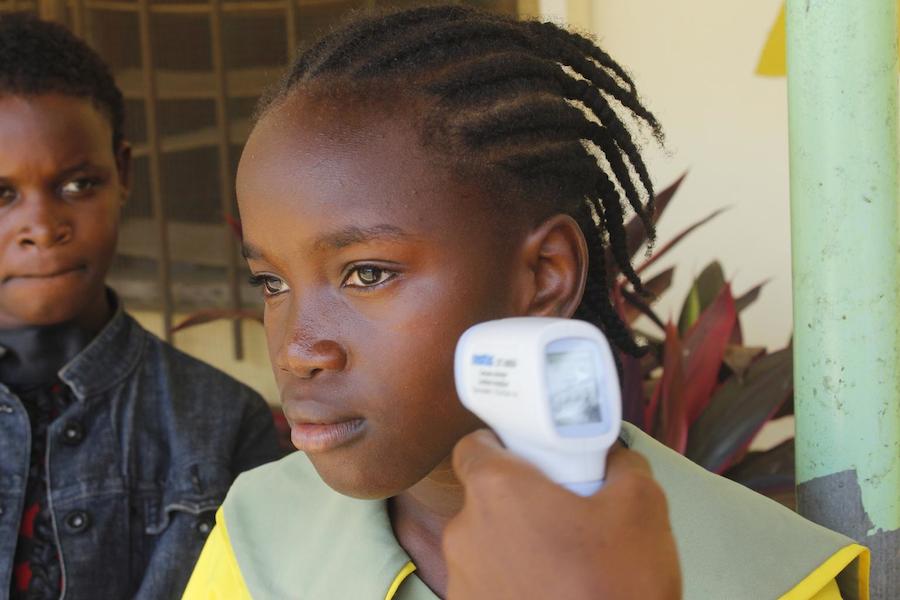 Above, a teacher at a school in Monrovia, Liberia's capital, performs a routine temperature check on a student — a practice adopted across all school districts to ensure kids’ safe return to the classroom after a seven-month closure following the 2014 Ebola outbreak. UNICEF worked closely with local partners to support the reopening, providing hygiene kits and training district education officers and other officials in prevention protocols. © UNICEF/UNI179850/Jacobs Social mobilizers — UNICEF-trained individuals tasked with teaching the importance of hygiene, immunization, proper nutrition and education within their respective communities — have long played a key role in UNICEF-led interventions in vulnerable countries. And they are indispensable in a public health crisis, particularly in countries with large rural and other hard-to-reach populations. Above, a social mobilizer makes the rounds in the Lologo village in Juba, South Sudan's capital, to educate residents about COVID-19. © UNICEF/UNI317957/Chol

South Sudan is just one of over 60 countries where UNICEF is focusing its resources and energies as part of the global response to COVID-19. UNICEF has been working with other UN agencies, governments and other partners since the beginning of the current crisis to get medical and other supplies to where they are needed most; to help shore up country health systems so they can handle COVID-19 cases and deliver other health services kids need; and to strengthen water, sanitation and hygiene services and infrastructure, among other urgent priorities.

UNICEF's Global COVID-19 Situation Report, which is regularly updated, offers a detailed look at UNICEF's activities and results — the many ways in which UNICEF is working to make sure that children, who are less likely to get sick from coronavirus, do not become its hidden victims.

Help UNICEF fight COVID-19. Your contribution can make a difference.

With research by Ruthia Yi

Top photo: This boy from Guinea returned to school with UNICEF's help following the Ebola outbreak in 2014. UNICEF continues to support children in Guinea, Sierra Leone and Liberia as they rebuild their lives post-Ebola. Many children suffer stigma and discrimination in their communities because of a family member's — or their own — illness. © UNICEF/UNI283265/Hyams