The global response to COVID-19 has disrupted polio immunization efforts in dozens of countries — putting children at risk and threatening to undermine decades of progress against the crippling disease.

Polio once caused epidemics too.

Before there was a vaccine, the virus would spread with abandon, preying on young children and leaving many of them crippled for life.

That was over a half century ago. But then the polio vaccine was introduced, a global eradication campaign launched, polio immunizations became routine and by the end of 2018, the disease had been eliminated in all but two countries. A child is given the polio vaccine during an immunization drive at a UNICEF-supported health center in Gitega, Burundi. © UNICEF/UNI213059/Prinsloo

Now polio is threatening to make a comeback. Measures to contain the spread of COVID-19 have widely disrupted vaccination efforts, leaving at least 80 million children at risk of contracting polio and other vaccine-preventable diseases, UNICEF and partners warn.

The estimate is part of an analysis of the impact of the pandemic response on global immunization services by UNICEF in partnership with the World Health Organization and Gavi, the Vaccine Alliance. The findings are based on data from 129 countries and a survey conducted with over 800 experts across 107 countries. At least 68 countries had moderate-to-severe disruptions or a total suspension of vaccination services during March and April 2020, the analysis showed.

Setbacks in the global fight to end polio could signal resurgence

The disruptions are particularly ill-timed. Even before the coronavirus pandemic hit, a new strain of the virus had emerged in Angola, Central African Republic, Democratic Republic of Congo, Nigeria and other countries that had previously eliminated the disease. Cases were also spiking in Afghanistan and Pakistan, where progress against polio has always been precarious. Since the suspension of vaccination campaigns due to COVID-19, there have been new polio outbreaks reported in Niger and Chad.

On a positive note, in many countries, the health personnel, practices and infrastructure that were put into place to fight polio are proving indispensable in the fight against coronavirus. Once lockdowns are lifted, the hope is that polio prevention activities will be able to immediately kick back into high gear. 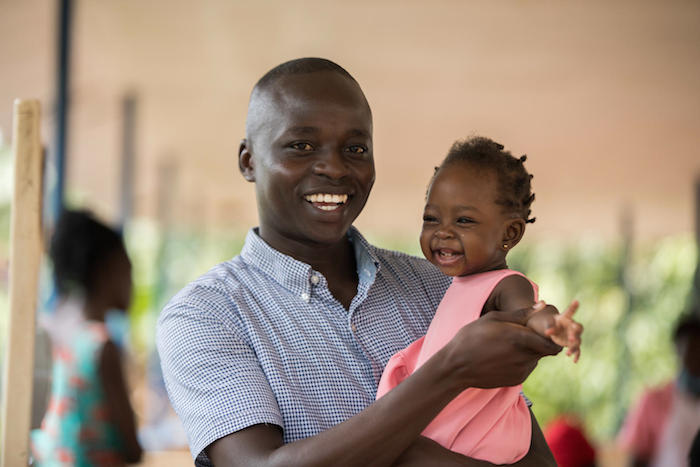 In Uganda, Herbert brought his 1-year-old daughter, Donatel, to a UNICEF-supported health center to get immunized against polio and other vaccine-preventable diseases — making the two-hour trip in the midst of a COVID-19 lockdown. © UNICEF/UNI325801/Abdul

In the meantime, UNICEF is urging countries to intensify efforts to track unvaccinated children so they can be reached quickly once services can resume.

UNICEF is also calling on governments, the private sector and the airline industry to work together to overcome pandemic-related logistical hurdles in transporting vaccines and vaccine-related supplies to countries in need.

"We cannot exchange one deadly outbreak for another," UNICEF Executive Director Henrietta Fore said. "We cannot afford to lose the decades of health gains that everyone has worked so hard to achieve. We need joint, concerted efforts to put vaccinations back on track."

UNICEF and its partners in the Global Polio Eradication Initiative (GPEI) — Rotary International, the World Health Organization (WHO), the U.S. Centers for Disease Control and Prevention (CDC), the Bill & Melinda Gates Foundation and Gavi, the Vaccine Alliance — are working together to end polio forever. Since its inception in 1988, GPEI has played a fundamental role in dramatically decreasing the number of polio endemic countries from 125 countries down to just two: Afghanistan and Pakistan. UNICEF is grateful for these dedicated partners in the fight to ensure that no child will die from this debilitating disease.

Top photo: A health worker vaccinates 1-year-old Ahmad at the door of his family's home during a 2019 national immunization campaign in Pakistan. UNICEF and partners found that vaccination services have been disrupted by the COVID-19 pandemic response in at least 68 countries, putting 80 million children under age 1 at risk of contracting vaccine-preventable diseases like polio and threatening to undermine hard won progress toward polio eradication. © UNICEF/UNI217679/Zaidi