Learning to Create Community in Montenegro

Two years ago, at May 25th High School in Tuzi, Montenegro, the students were divided. Diverse languages, religions and ethnicities kept students from communicating or hanging out with those who were different. Cliques formed, and fights often broke out among peers.

“There were so many stereotypes between the students that it created barriers and a lot of misunderstandings,” recalls Andrijana Paljušević, now 20. “Many different institutions that tried to deal with the problem could not find an effective and long-term solution.”

There were so many stereotypes between the students that it created barriers and a lot of misunderstandings. — Andrijana Paljušević, Montenegro student

But Andrijana and four other students decided to do something about it. They applied to participate in the first UPSHIFT Social Impact Workshop organized by the UNICEF-supported Youth Innovation Lab “Kreaktivator.” UPSHIFT creates youth-led social impact programs by providing youth with skills training, financial resources and mentorship.

At first, the students did not have a plan for how they would solve the problem. “We just felt that the situation at the school was wrong and wanted to do something about it,” says Andrijana. 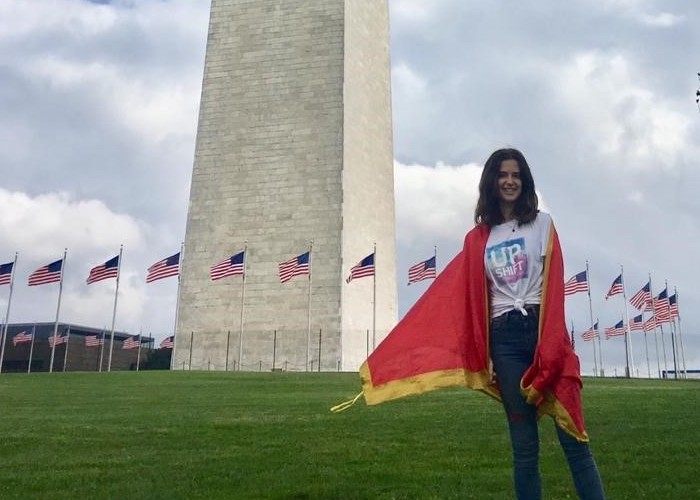 A UNICEF-supported social impact workshop gave Andrijana Paljušević the training and inspiration she needed to help organize a well-attended "Festival of Diversity" at her high school in Tuzi, Montenegro. She is currently an exchange student at American University in Washington, D.C.   © UNICEF

At a three-day UPSHIFT workshop, the group of students learned techniques and methods to identify the root of the problem in their school and then worked with mentors to develop a solution. In the process, they developed transferable skills they can use in their professional lives, such as critical thinking, communication, problem solving and teamwork.

On the third day, the students presented their project to a panel of judges. Their solution: Host a diversity fair with a range of events, including movies and sporting events, aimed at bringing the young people together and showing them that they have more in common than they think. Their project ended up winning financial and mentoring support from the Youth Innovation Lab.

In June 2016, their idea came into fruition. To Andrijana’s surprise, countless students volunteered to plan the school's first ever "Festival of Diversity" and more than 400 students took part in the various activities.

People who were once fighting were now able to be in the same room together to plan the event, despite our differences.

“People who were once fighting were now able to be in the same room together to plan the event, despite our differences,” she said. “UPSHIFT gave us the spark that we needed to show us what we could do and helped us reach a new level that we may not have found on our own.”

A year later, Andrijana and her team hosted the second annual “Festival of Diversity,” but instead of support from the Youth Innovation Lab, they managed to organize everything by themselves, including raising financial support from a local non-governmental organization.

UPSHIFT gives young people the knowledge, skills and opportunities to become agents of social change. The Lab offers young people space, tools and programs that enable them to develop and implement solutions to the challenges they face, as well as gain skills they can use in the future world of work.

UNICEF Montenegro Representative Osama Makkawi met with volunteers at the UNICEF Montenegro Power of Adolescence conference in September 2017. Andrijana Paljušević is on the far right. © UNICEF

Today, Andrijana is using the skills – and the confidence – she developed from the UPSHIFT workshop in a semester-long cultural exchange program at American University in Washington, D.C. She is studying political science there and hopes to work for the United Nations someday.

“Looking back on the program, it really changed my life,” she says. “UPSHIFT gave me the freedom to express myself and the confidence to truly believe young people can change their communities for the better.”

“You just need to show people that diversity should not divide us, but rather be a bridge between our hearts."

Please help UNICEF support training and education for young people around the world.

Kimberly Chriscaden is a communications specialist in the Gender Section at UNICEF.