A Q&A with Jewish Family Service of San Diego about their team's legal and advocacy work for families seeking asylum in the United States.

Please tell us a bit about yourself and your role at Jewish Family Service of San Diego.

KATE CLARK: Yes, I’m an immigration attorney, practicing now for 10 years, and I've actually been at JFS since being admitted to the bar. It's been amazing to see the progression of our work and involvement in our community really deepen over this past decade.

As the organization’s senior director of immigration services, I oversee our immigration legal work and our sheltering work. JFS, which was founded over 100 years ago, is also a resettlement organization.

After President Trump took office, we saw that immigrants’ rights were not being upheld so we joined about 50 other organizations to form the San Diego Rapid Response Network. It’s a real grassroots effort. We are on the front lines every day helping those who cross the border into San Diego, many having traveled across several countries, even across continents to get here.

We are on the front lines every day helping those who cross the border into San Diego, many having traveled across several countries, even across continents to get here.

The San Ysidro Port of Entry, about 20 miles southwest of downtown San Diego and bordering on Tijuana, Mexico, is one of the largest land border crossings in the world. It is where we encounter a really diverse group of asylum seekers. We know from our sheltering work that there are folks coming from all over, people who are in need of protection, who are fleeing for their lives. People from Mexico, Russia, Haiti. People who are trying to escape sexual violence, physical violence, extortion, trafficking. 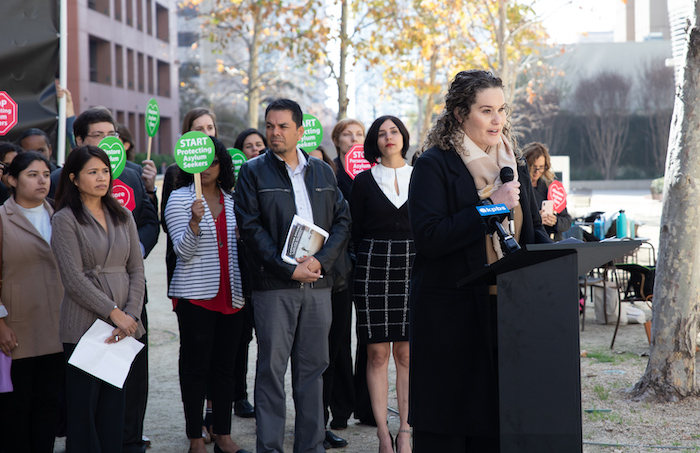 Jewish Family Service of San Diego's senior director of immigration services, Kate Clark, at podium, speaks at a recent event advocating for the rights of asylum seekers. JFSSD receives funding support from UNICEF USA and collaborates with UNICEF to provide emergency assistance and legal support to migrants arriving at the San Ysidro Port of Entry, at the U.S.-Mexico border at Tijuana. The group’s staff welcomes families upon release from U.S. Department of Homeland Security custody. © JFSSD

How do families come into the care of JFS?

KATE CLARK: Agents from the U.S. Department of Homeland Security will let us know who we’re receiving and when we're receiving them. They'll let us know how many to expect on a given day, and someone from Border Patrol or ICE will drop them off. And now, with the end of MPP, our team is at the San Ysidro Port of Entry receiving families, welcoming and helping process them. 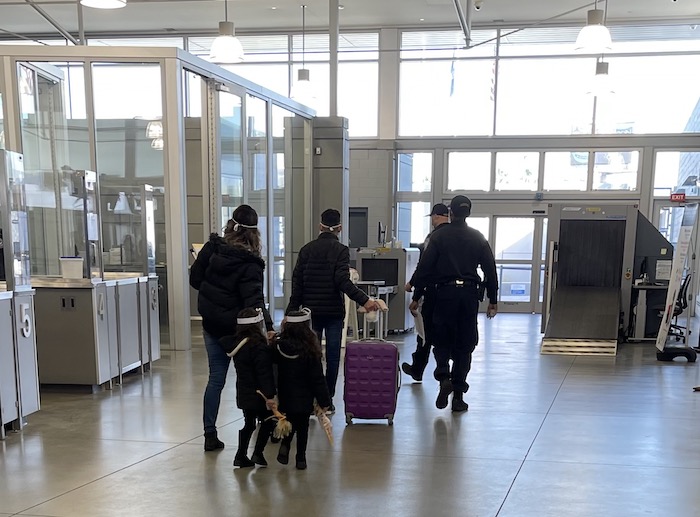 A family previously enrolled in MPP approaches the border, where they will be allowed to continue pursuing their asylum case while in the U.S. with support from the JFSSD immigration services team. The U.S. Government began permitting those enrolled in MPP entry on Feb. 19. © JFFSD

Our shelter team is incredible. When the families – or guests, as we call them — arrive, they get a very warm welcome and we make sure they know that we are not the government, and they’re not in detention and that we're here to help. There’s an intake process and an orientation. They are provided with a warm meal and a place to rest. And then we spend the next couple of days figuring out what kind of additional support they need.

Do they usually stay in San Diego?

KATE CLARK: We’re a respite shelter. Before the pandemic, after 24 or 48 hours with us, most would move on to their final destination, to join their point of contact or a family member who already lives in the U.S. We were accommodating anywhere from 60 to 100 guests every night. But then in April 2020, that number dropped way down to just a handful because of policies like Title 42. We’d see maybe a couple of dozen guests in a month.

So we shifted to a different approach. In consultation with state and county health officials, we arranged for asylum seekers to stay at a hotel so they could quarantine and maintain social distance under county rules for COVID prevention. At the shelter most guests would stay in one big room so we had to make a change.

In November and December and into January, the numbers had declined to a trickle  — nobody was getting through, only individuals with serious medical conditions, pregnant women in their third trimester, really vulnerable folks. But since Biden’s inauguration the numbers are ticking back up. In February we received 493 individuals, up from just 147 in January. This month, we have already served 645 individuals, and it's only March 10. 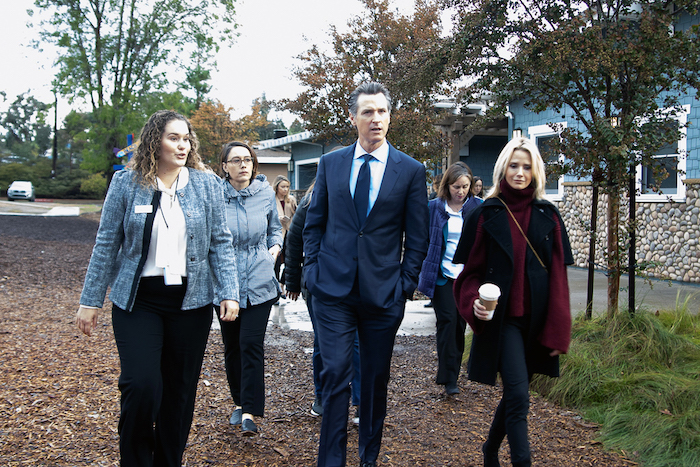 Wow. So before the election, asylum seekers weren't being processed unless they were incredibly vulnerable, and now more people are being afforded their right to seek asylum in the States?

KATE CLARK: Right. It's still such a small percentage of those who have made the journey and are still waiting on the Mexico side of the border, but yes.

As you know, the system for seeking asylum has been dismantled. So the greatest need right now is to restore the ability of asylum seekers to seek safety and protection, and to make sure they have all the information they need to do so. We all need a better understanding of how and when various things are going to happen. The Biden administration has been very clear that they are going to address the problems caused by MPP. The question is how do they plan to do that. There’s a lot of uncertainty.

Asylum seekers also need access to counsel. They are not provided with attorneys and there’s not enough pro bono legal representation available right now to help everyone who needs it. JFS can only take on so many cases.

Can you talk a little bit about the relationship between our two organizations?

KATE CLARK: UNICEF at all levels – HQ, UNICEF USA and UNICEF Mexico – has been an incredible partner in the work, supporting our shelter and helping us advocate on behalf of the individuals we represent.

I really believe that we're all one interaction away from better understanding an issue, and I think that the opportunity and platform to share educational experiences has been instrumental.

I'm looking forward to continuing our work together over the next four years and making even more progress on behalf of so many vulnerable individuals. 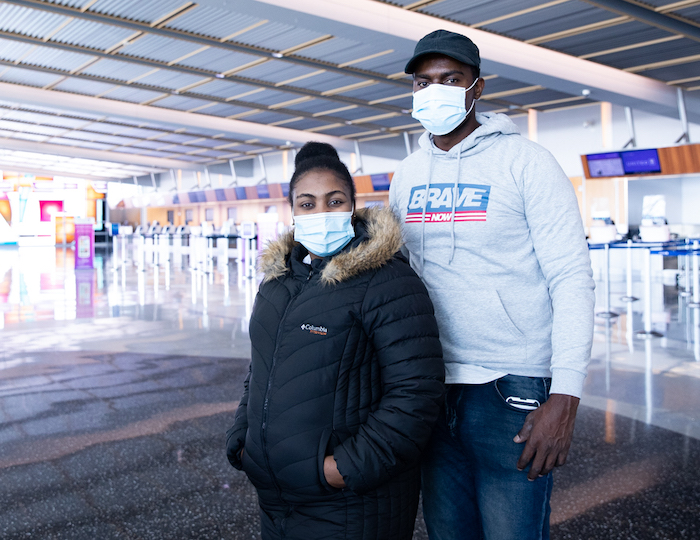 JFSSD helped Emmanuel and Fabiola (names changed) navigate the complex legal system upon their arrival in the U.S. from Haiti. © JFSSD

What does JFS need to better serve this population?

KATE CLARK: We could always use more funding, of course. If supporters want to donate items instead, we have an Amazon wish list.

We also encourage people to reach out to their Congressional leaders and see how they can get involved in their communities. Know who the partners are and make those local connections. About 98 percent of the folks we're receiving go on to other destinations across the country. So we need to build a national network of welcoming communities. You don’t have to be at or close to the border to help asylum seekers and refugees.

I love the language you use when referencing individuals who are coming across, calling them guests. It's empowering and it centers on their humanity. Can you talk about some of your favorite things about the work, the things that give you hope?

KATE CLARK: Yes, it is ultimately the families themselves that give me hope. The kids, mothers, fathers. I miss the interactions we were having with families pre-pandemic — running around outside, playing a pickup game of soccer, sharing a meal, holding a baby so the mom could shower. We were forming relationships with people, and learning from them and realizing we all still have so much more to learn.

Check out a previous interview on UNICEF USA’s UNITE for Children podcast to learn more about MPP and how JFSSD is helping to support and empower asylum seekers in the United States.

Take action on behalf of asylum-seeking children and families.

Top photo: Paolo and daughter Camila (names changed) – asylum seekers from Argentina – received support from Jewish Family Service of San Diego at the shelter they operate as part of the Rapid Response Network working in the San Diego border region to protect and uphold the rights of asylum seekers. JFSSD receives grant funding from UNICEF USA. All photos provided courtesy of JFSSD.