For Haiti, Victory Is in Sight in Fight Against Cholera

There hasn't been a single confirmed case of cholera in Haiti since February. This is big news for the country where an outbreak in 2010 killed nearly 9,800 people and sickened over 800,000.

The moment Yolette Berdovil saw her baby son Jean's watery diarrhea, she knew what she had to do. She called for help.

Jean was quickly transported by motorbike to the Acute Diarrhea Treatment Center in Lascahobas, not far from the village where they lived in this remote, mountainous part of east-central Haiti, bordering on the Dominican Republic.

At the treatment center Jean would be given fluids to counteract the dehydrating effects of the diarrhea. And he would be tested for the bacterium that causes cholera — a preventable and treatable infection spread through contaminated food and water. Yolette Berdovil, 34, walks with her son Jean near their home in Lascahobas, Haiti, a remote mountainous area northeast of Port-au-Prince. When Jean had watery diarrhea, health workers reported it as a suspected case of cholera — prompting the deployment of a rapid response team to disinfect homes and brief members of the community on best prevention practices. © UNICEFHaiti/2019/Meddeb

When treated, most people recover from cholera without any lasting effects. But when the patient has acute watery diarrhea and treatment is delayed, the disease can be fatal. Cholera is particularly dangerous for the very young, the very old — and the undernourished. In Haiti, persistent poverty leaves many children vulnerable to malnutrition.

Until health workers could confirm that Jean had in fact contracted cholera, his condition would be classified as a suspected case — enough to trigger the immediate deployment of a rapid response team to the area.

Jennyfer Joseph, the cholera project leader in Haiti for ACTED, an NGO and UNICEF partner, was part of the team that responded to Jean's case. These days, with cholera on the decline across most of Haiti, teams like Joseph's are working with the Ministry of Public Health to focus attention on the country's last remaining hot spots — remote areas like Lascahobas. “Sometimes, it takes four to five hours to reach suspicious areas, and we spend the night there because we do not have time to return to our base,” Joseph says. A UNICEF-supported rapid response team deploys to Lascahobas, a remote area that is one of the last cholera hot spots in Haiti. © UNICEF Haiti/2019/ Meddeb

First stop upon arrival is the family's home. A chlorinated compound is sprayed to disinfect the area. All homes within 50 meters receive the same treatment.

The team's presence attracts the attention of the neighbors — a great opportunity for Joseph to brief them on prevention tactics, and to distribute the disinfectant and other supplies, like soap and water purification tablets, and an oral hydration medicine to give to those with cholera-like symptoms.

“When you have diarrhea, or if you are vomiting, the first thing you need to do is take the oral serum,” Joseph advises those gathered.

Yolette says she didn't hesitate to seek medical attention for her son because of past experience. Cholera had claimed the lives of many of her relatives in the past. 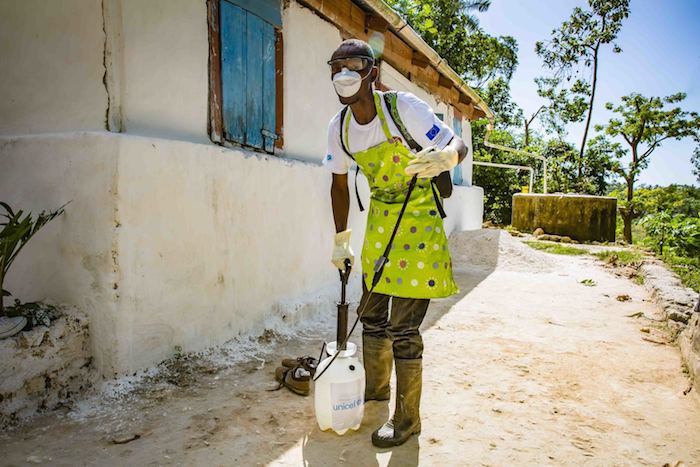 A member of a cholera rapid response team in Haiti prepares to disinfect a residential area suspected of being contaminated with disease-causing bacteria. © UNICEF/UN054109/Bradley

And Yolette isn't the only one haunted by memories of what the disease can do. The cholera outbreak of 2010 in Haiti has been one of the worst public health crises in modern history. From 2010 through December 2018, there were 820,300 suspected cases of the disease, and 9,762 cholera deaths, according to government data.

But those numbers have dramatically tapered off in recent years, largely due to the response by teams like Joseph's — coupled with broader efforts, supported by UNICEF, to improve access to safe water for drinking and cooking and enable best hygiene practices and other methods of prevention.

The fight against cholera has been so effective, in fact, there hasn't been a single confirmed case in Haiti since Feb. 4, 2019. This puts the country squarely on the path toward eliminating cholera altogether, those closely involved in the elimination efforts say.

"If we continue on this path, we will almost certainly be able to declare an end to cholera in Haiti in the very near future," says Ganddey Milorme, an emergency officer with UNICEF Haiti. Changing basic behaviors — like washing hands with soap before eating — will make all the difference, he says.

Three years must pass without a single laboratory-confirmed case before the World Health Organization can declare an official end to the 2010 cholera epidemic.

“We are very happy to say that there has been no new confirmed case of cholera since February 2019,” says Maria Luisa Fornara, UNICEF Representative in Haiti. “That said, we must not stop. We must keep up the efforts, to continue mobilizing, strengthening community surveillance and capacity of laboratories. We must also work with communities on better water supply conditions and better hygiene and sanitation measures. We are truly in the very last mile.”

A lasting victory for Haiti against cholera will require sustainable improvements to Haiti's water and sanitation systems and infrastructure and equitable access to safe water and sanitation for all. With support from Giorgio Armani Fragrances and others, UNICEF continues to work with government and other local partners toward these goals. Making sure Haiti is prepared for the next extreme weather event — and having the proper emergency response mechanisms in place — will also help keep cholera at bay. 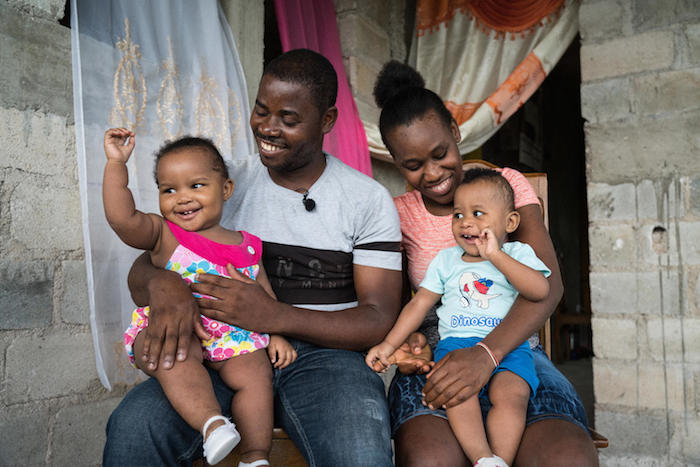 Help UNICEF keep cholera out of Haiti, and deliver nutrition and other services for children in need. Your contribution can make a difference.