When it comes to natural disasters, Haiti ranks as the fifth most vulnerable country — and third least able to cope — in the world. How UNICEF is helping to reduce the risks for children.

One year ago this week, Hurricane Matthew leveled Haiti's southern coast, creating a new crisis in a country that had already seen more than its fair share of disasters, from a massive earthquake to a deadly cholera outbreak to an El Niño-induced drought.

Relief efforts supported by UNICEF have made significant progress in the months since. To date, more than 550,000 people have benefited from improved access to clean drinking water; 160,000 children have been screened for malnutrition; more than 28,000 children have received psychosocial support and nutrition, health and hygiene education; and 120 damaged schools have been rehabilitated, allowing 30,000 students to return to their classrooms. 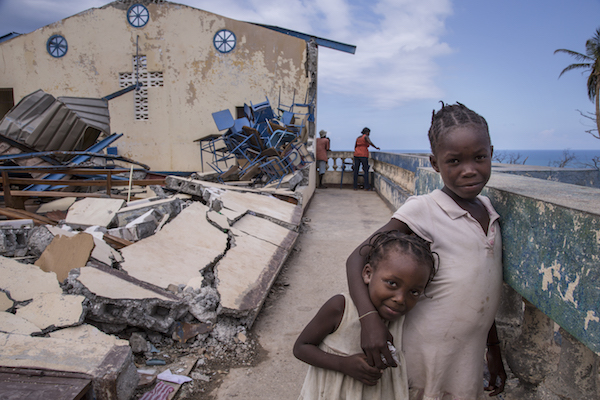 Two girls take a break from playing outside a church in Jérémie that was converted into a temporary shelter after Hurricane Matthew devastated Haiti's southern coast. © UNICEF/UN035877/LeMoyne.

Bernard, a 14-year-old from Roche-a-Beateau, recalls the despair he felt after Matthew passed, as the extent of the destruction became clear. The storm had claimed hundreds of lives and destroyed roads, bridges and other critical infrastructure. "I thought it would be virtually impossible to continue living," Bernard says, "but people are beginning to gradually recover."

UNICEF continues to work with the government of Haiti and other partners to improve conditions for children, and to strengthen the capacity of local communities to withstand future disasters — to give them the tools they will need to prepare, cope and rebuild the next time around. 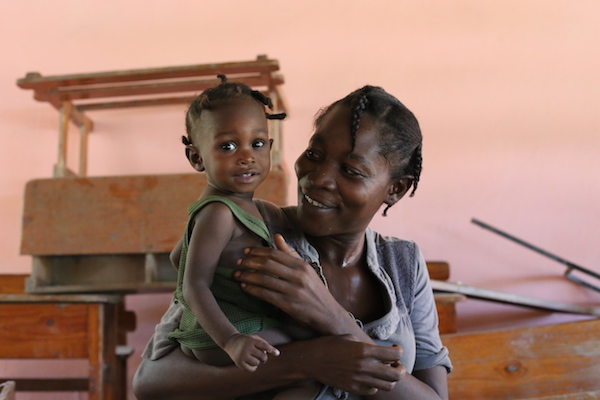 Siyou, who was only a year old when Hurricane Matthew struck Haiti on Oct. 4, 2016, was given temporary shelter with his mother in a schoo in Arcahaie, in the Ouest department.  © UNICEF/UN034984/Gonzalez

Unfortunately, there almost certainly will be a next time. While Haiti was largely spared the worst from this summer's hurricanes, the damage that Jose, Irma and Maria caused to the region was a frightening reminder that the island nation of nearly 11 million remains highly vulnerable, due to its geographic location and the aggravating effects of climate change.

And despite some gains in health care, education and other critical areas, the children of Haiti continue to face a number of threats to their safety and wellbeing. An estimated 300,000 children suffer from chronic malnutrition. More than half of all rural households — and more than a third of urban ones— still lack access to a safe water source. Cholera, a preventable, treatable disease, continues to be a serious problem. And while overall primary school attendance rates have improved dramatically, two out of every ten children aged 6-11 are still missing out on their right to learn.

UNICEF continues to work with partners to develop, implement and advocate for sustainable solutions. Together in Haiti offers more information about how UNICEF is working with children, communities, partners and the government to improve the lives of Haiti's youth.

Learn more about how UNICEF is responding to emergencies in Haiti and elsewhere. Help UNICEF save and protect children in crisis. Support UNICEF's disaster relief efforts.

Top photo: From left to right: Elodie, 7, Givelore, 8, Francesca, 6 and Erica, 8, gather outside the Notre Dame de Lourdes School in Jérémie, one of 120 schools in Haiti that were able to reopen with UNICEF's help after suffering damage during Hurricane Matthew. © UNICEF/UN047536/Bradley