Devastating floods, cyclones and other environmental disasters linked to climate change are threatening the lives and futures of more than 19 million children in Bangladesh. A new UNICEF report details how Bangladesh's flat topography, dense population and weak infrastructure make it uniquely vulnerable to the powerful and unpredictable forces that climate change is compounding.

"Climate change is deepening the environmental threat faced by families in Bangladesh's poorest communities, leaving them unable to keep their children properly housed, fed, healthy and educated," said UNICEF Executive Director Henrietta Fore, who visited Bangladesh in March 2019. "In Bangladesh and around the world, climate change has the potential to reverse many of the gains that countries have achieved in child survival and development." 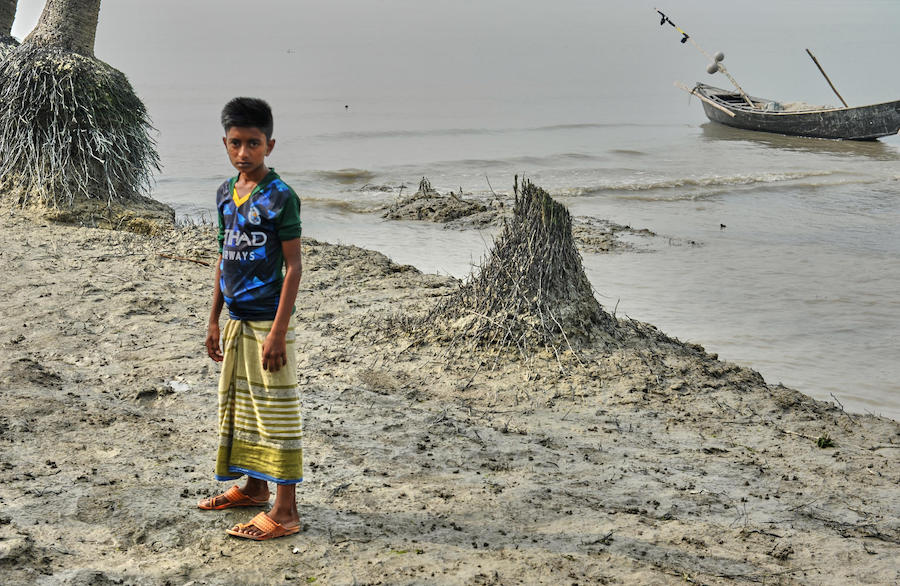 Around 12 million of the children most affected by climate change in Bangladesh live in and around powerful river systems which flow through the country and regularly burst their banks. Eleven-year-old Maroof Hussein (above) has vivid memories of the events of June 2017, when unusually strong seasonal floods hit his village, Nizampur, in Patuakhali District on the fringe of the Bay of Bengal.

"My school and house were flooded at the same time," said Maroof. "I went to bed and woke up to see the floodwaters surging in. It was terrifying." Maroof and his family managed to escape, but his 8-year-old friend, Iqbal, was washed out to sea and drowned. © UNICEF/UN0286426/Lawson Tancred

Two years ago, 14-year-old Shanta's family lost everything when the Kirtankhola River broke its banks near her home. A few days later, her father died of a heart attack. Shanta (above) had to take a job in a factory.  "I want to study. I want to play and spend some time with my family," she said. "But I can't do that. I have to work. When I come back to this place, I feel really bad. It makes me want to cry." 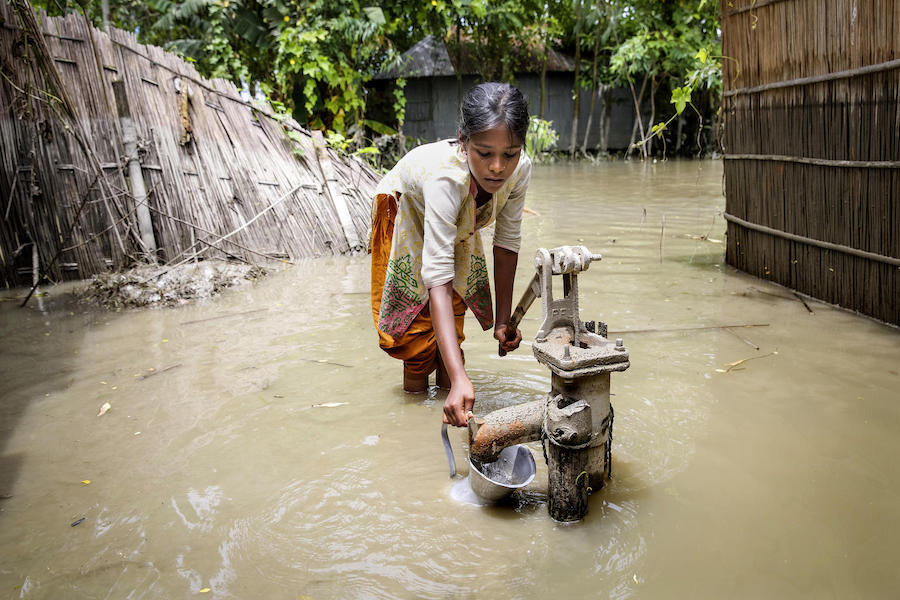 The contamination of drinking water supplies is a major risk during flooding. Above, in the midst of the 2016 floods in Kurigram, northern Bangladesh, a girl tries to pump clean water from a standpipe.  © UNICEF/UN0286415/Akash

UNICEF is working with the government to provide sustained safe water access to millions of people across Bangladesh. One technology promoted by UNICEF and partners helps coastal communities protect their drinking water supply against the intrusion of salf water from the sea. The system, Managed Aquifer Recharge, is working in approximately 75 communities and is ready to be taken to scale. 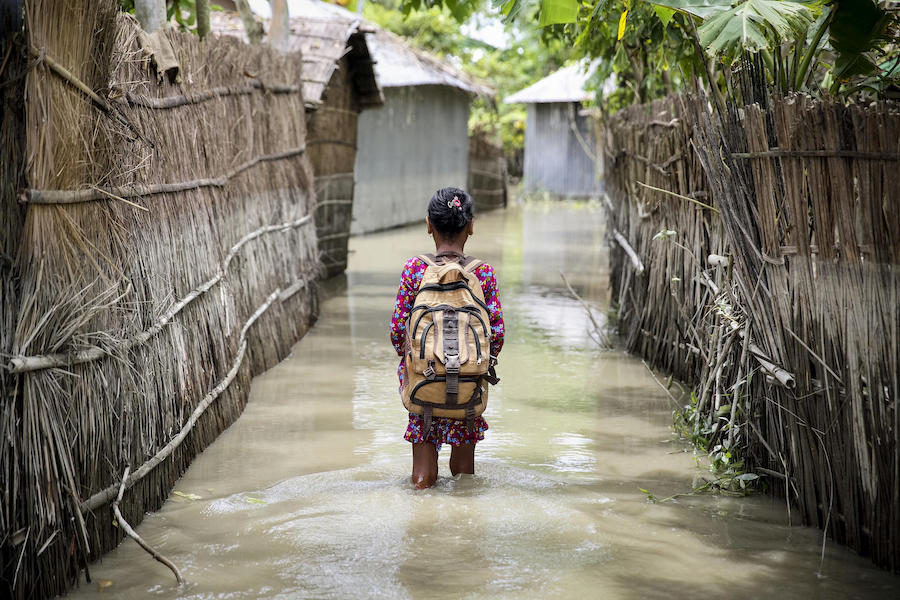 Above, a child wades through water on her way to school in Kurigram district of northern Bangladesh during floods in August 2016. © UNICEF/UN0286416/Akash

Students worry that floods and erosion could soon claim their classrooms — and their futures. "The erosion on the island is happening so quickly now," says Shaheen Alam, 16, who attends Kunder Para high school in northern Bangladesh. "I have my final science exams next year, and if anything happens to the school, then my chances of taking my exams and getting the grades I need to join a good university will be destroyed. My dream will not happen."

In 2019, UNICEF and partners will help 272,000 children between the ages of 4 and 14 access formal or non-formal education in Bangladesh, including early learning, and support skills development programs for 52,000 15- to 18-year-olds. 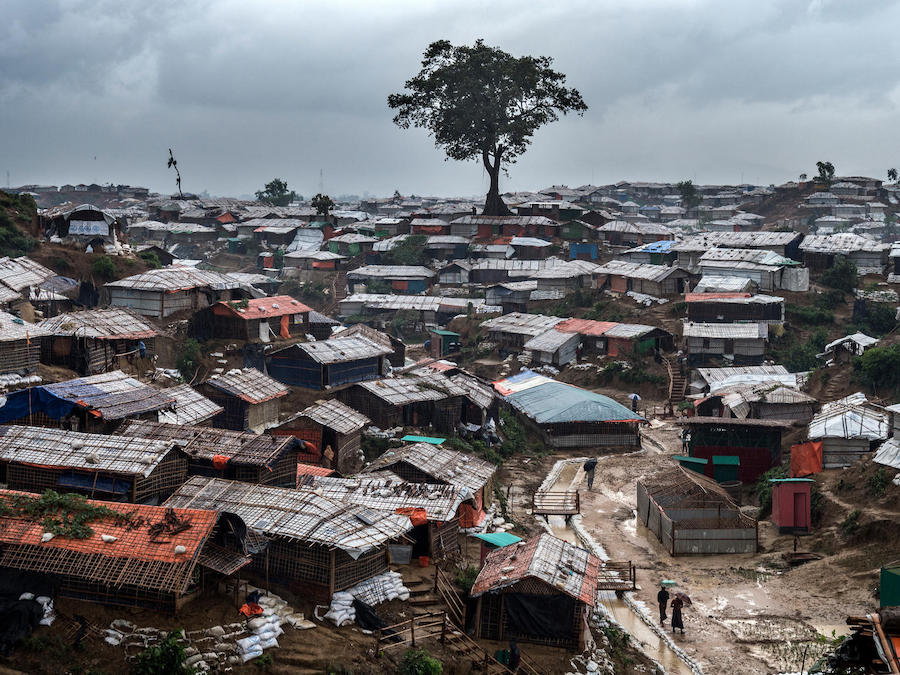 Another 4.5 million of the children most affected by climate change live in coastal areas of Bangladesh regularly struck by powerful cyclones, including half a million Rohingya refugee children living in fragile bamboo and plastic shelters. Deforestation has left refugee camps — like Kutupalong in Cox's Bazar (above) — vulnerable to erosion and landslides during monsoon flooding. © UNICEF/UN0235247/LeMoyne Climate change is a key factor pushing poorer Bangladeshis to abandon their homes and communities to try and rebuild their lives elsewhere. Many head to Dhaka and other major cities, where children risk being pushed into dangerous forms of labor and early marriages. Bangladesh has 6 million climate migrants already, a number that could more than double by 2050. Sixteen-year-old Mohamed Shajib (above) came to find work in Dhaka after flooding swept away his family's home. © UNICEF/UN0286447/Brown

"When families migrate from their homes in the countryside because of climate change, children effectively lose their childhoods," said UNICEF Bangladesh Representative Edouard Beigbeder. "They face danger and deprivation in the cities, as well as pressure to go out to work despite the risk of exploitation and abuse." Drowning is by far the leading cause of death among Bangladeshi children, causing more than one-third of all child injury deaths — nearly 40 deaths every day. UNICEF supports swimming lessons for children in Bangladesh through the SwimSafe program. About 130,000 children have completed the course so far. © UNICEF/UN0286434/Centre for Injury Prevention and Research, Bangladesh

Since the early 1990s, UNICEF and other partners have supported disaster preparedness and risk reduction programs that have made vulnerable communities in Bangladesh more resilient to the dangers of climate shock. UNICEF is calling on the international community and other partners to support the government in implementing a range of initiatives to shield children from the effects of climate change.

Please support UNICEF's work to save and protect children.

Top photo: A family takes to their boats after severe flooding in 2017 in the northern district of Kurigram, Bangladesh. © UNICEF/UN0286438/Ghosh