Displaced by Syria's 8-year-long civil war, young students resume their educations with help from UNICEF and Educate A Child.

AL-HASAKEH, SYRIA Four years ago, Ahmad was enjoying the summer break and preparing to enter sixth grade when violence escalated in his hometown of Mari'a in rural Deir-ez-Zor, Syria. Ahmad and his family had to flee the fighting.

Ahmad, his parents and six siblings moved four times in the next three years, from one village to another, as the Syrian civil war raged around them. Last year, they finally settled in Areesheh camp in Al-Hasakeh Governate.

"It was the most challenging time of my life," Ahmad recalls. "Imagine going from one place to another, barely staying a few months."

But Ahmad chose not to give up. His family fled with very few belongings. He grabbed some books from his father's library and a small blackboard.

I didn't know how long I would be out of school. But I wanted to make sure that I did not forget what I had already learned.

"I didn't know how long I would be out of school," he explains. "But I wanted to make sure that I did not forget what I had already learned."

Soon after Ahmad and his family moved into the tented camp of Areesheh in the Hassakeh Governate, UNICEF set up several tents to serve as an educational center for out-of-school children. At the center, children between the ages of 6 and 15 study English, Arabic, math and sciences, including physics and chemistry, using a Self-Learning Program (SLP), with the help of volunteers. 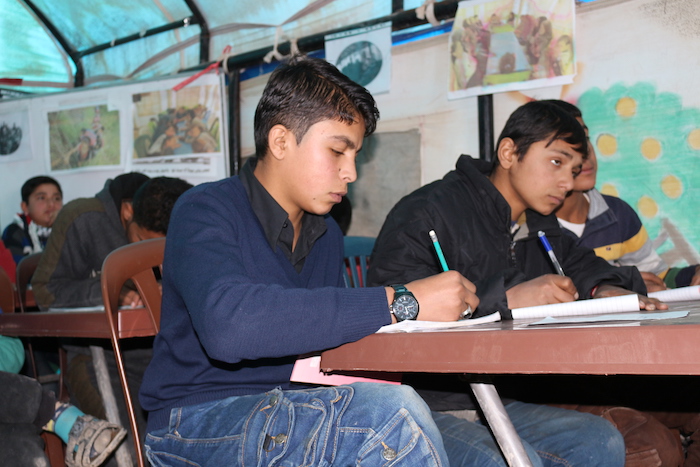 Displaced by violence in Syria, Ahmad, left, and his fellow students are determined not to miss out on an education. Thanks to a Self-Learning Program from Educate A Child and UNICEF USA, their futures look brighter. © UNICEF

"I always keep in mind that if I don't study now, I will regret it in the future," says Ahmad, wise beyond his years.

Only a year into his studies at the center, Ahmad and 21 other students sat for placement exams and obtained their Grade 6 certificate.

Thanks to this innovative partnership between Educate A Child (EAC) — a global program of Education Above All — and UNICEF USA, the SLP has already reached more than 119,000 children across Syria with this potentially life-changing opportunity.

I always keep in mind that if I don't study now, I will regret it in the future.

Ahmad dreams of becoming an engineer and is confident of what the future holds for him, with renewed hope to continue his education.

"What keeps me going, despite the displacement and violence I have witnessed, is that I know I will succeed. I'm not afraid of the future because I'm preparing myself for it, with my education."

UNICEF and partners continue to work across Syria and in neighboring countries to help provide children with essential health, education, protection and nutrition services and to help build families' resilience.

"As the war enters its ninth year, UNICEF again reminds parties to the conflict and the global community that it is the country's children who have suffered most and have the most to lose," says UNICEF Executive Director Henrietta Fore. "Each day the conflict continues is another day stolen from their childhood."

Top photo: When violence escalated, Ahmad and his family fled their Syrian village. They moved several times over the next three years. Now they're living in a tented camp in Areesheh, and Ahmad is resuming his education with a Self-Learning Program supported by UNICEF USA and Educate A Child. © UNICEF