UNICEF and partners are on the ground working to stop the deadly outbreak in the embattled Democratic Republic of the Congo.

One year after an Ebola outbreak began in eastern Democratic Republic of the Congo, more than 2,500 cases have been reported and nearly 1,700 people have died — almost one-third of them children — in what the World Health Organization (WHO) is calling a "public health emergency of international concern." This designation, reserved for the most extraordinary health emergencies, has only been used four times before, including the 2014 Ebola outbreak in West Africa that killed more than 11,000 people in six countries: Liberia, Guinea, Sierra Leone, Nigeria, the United States and Mali.

"UNICEF urges neighboring countries to keep their borders open because any imposition on travel and trade restrictions will hurt communities at the heart of the outbreak that are deeply reliant on international trade and commerce. And they will slow down the response by making supply chains and travel more complicated. We understand that the call against travel and trade restrictions carries risks. UNICEF — and all of our partners — will continue to work with the concerned countries and communities to scale up the prevention measures already in place so that borders can stay open."

Nearly 1,700 people have died in the current outbreak — almost one-third of them children

Relief efforts have been complicated by public fears and a string of assaults on responders. Reuters reported that unidentified attackers killed two Ebola health workers in North Kivu over the weekend. Since January, there have been 198 attacks, leaving 7 people dead and 58 health care workers and patients injured.

The arrival of Ebola in Goma, the capital of North Kivu province located less than a mile from the Rwandan border, has raised fears that virus could spread quickly among the city's 2 million inhabitants.

"This is an emergency. There is a very real risk that the Ebola outbreak could spread to neighboring countries, so the international community should urgently come together to make sure that doesn't happen," said UNICEF Executive Director Henrietta Fore.

This is an emergency. There is a very real risk that the Ebola outbreak could spread to neighboring countries, so the international community should urgently come together to make sure that doesn't happen. — UNICEF Executive Director Henrietta Fore

UNICEF has been part of the response since the crisis began, working with national governments, the World Health Organization (WHO) and other partners to fight Ebola in DRC and step up preparedness in neighboring countries — Uganda, Burundi, Rwanda and South Sudan.

UNICEF and implementing partners have 1,200 staff on the ground, along with nearly 2,000 social mobilizers and psychosocial workers, contributing to key areas of the response. This includes communication and community engagement to inform local families on infection prevention and control; water, sanitation and hygiene (WASH) activities to prevent further spread of the virus; support for supplies and logistics; and counseling to assist children and families affected by the disease. 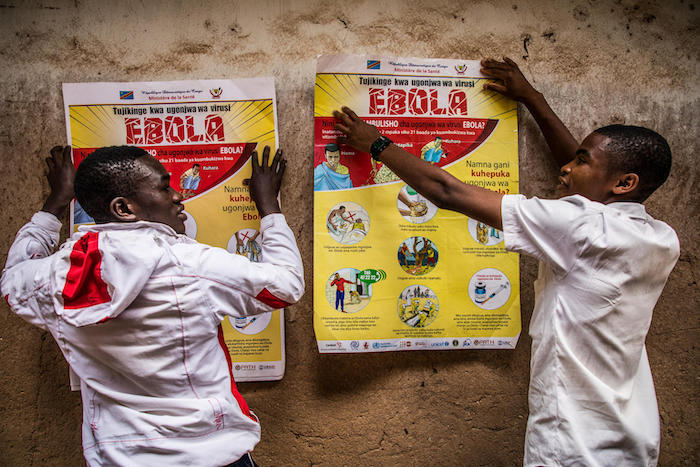 Students put up Ebola education posters on the walls of La Vérité school in Butembo, North Kivu, Democratic Republic of the Congo on March 23, 2019. © UNICEF/UN0311511/Tremeau

The epicenter of the second largest Ebola outbreak in history is the northeastern provinces of Ituri and North Kivu, two of the regions hardest hit by a wave of violence that has driven an estimated 4.5 million people from their homes and into severely crowded displacement camps. Hundreds of thousands more have fled to neighboring countries.

Fighting among rival militia groups has driven an estimated 4.5 million people from their homes

The combined threat of Ebola and measles for the thousands of families living in overcrowded and unsanitary displacement camps is unprecedented," said UNICEF DRC Representative Edouard Beigbeder. "We have a small window to prevent a potentially massive loss of life.

Health workers are urgently rolling out a complex measles vaccination campaign targeting 67,000 children in Ituri, where more than 5,400 measles cases and 500 measles-related deaths have been reported.

"The combined threat of Ebola and measles for the thousands of families living in overcrowded and unsanitary displacement camps is unprecedented," said UNICEF DRC Representative Edouard Beigbeder. "We have a small window to prevent a potentially massive loss of life."

At least 1,981 deaths due to measles have been reported, two-thirds of them children under the age of 5

The first sites targeted for measles vaccinations are four displacement camps in Bunia, Ituri, A huge influx of families uprooted by fighting in recent weeks has pushed the boundary of one camp barely 100 yards from an Ebola treatment center and less than two miles from parts of Bunia that have seen five Ebola cases since the start of the outbreak, two of them in the past few weeks. 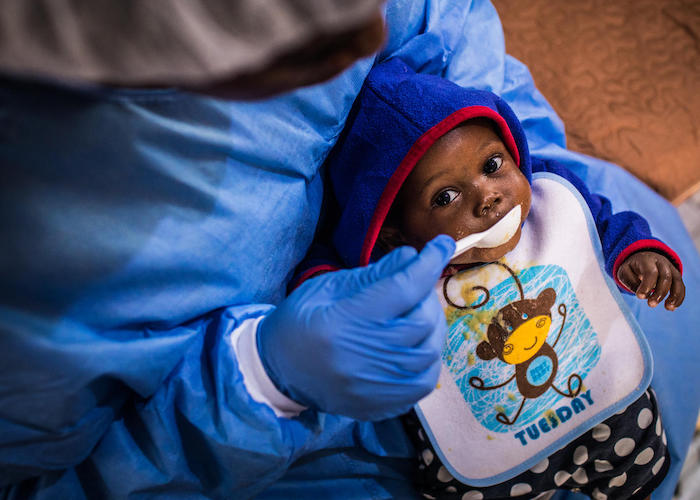 Ebola survivor Ruth, 19, cares for 7-month-old Christ-Vie in the UNICEF-run nursery for babies and young children affected by the virus at the Ebola Treatment Center of Butembo in North Kivu, Democratic Republic of the Congo on March 23, 2019. Ebola killed Christ-Vie's mother a few days before this photo was taken. © UNICEF/UN0311515/Tremeau

Health workers will need to wear gowns, gloves and other protective gear to prevent contact with blood or other body fluids. Teams will include an additional health worker who will evaluate and refer suspected Ebola cases, check temperatures and oversee handwashing and other safety measures.

Some early Ebola symptoms — fever, redness around the eyes, diarrhea — are virtually identical to those of measles, malaria and cholera

Some of the early symptoms of Ebola — fever, redness around the eyes, diarrhea — are virtually identical to those of measles, malaria and cholera, all of which are prevalent, especially in the severely congested displacement camps.

Up to 400,000 displaced people are thought to be living in 35 camps scattered across Ituri, in territory that is virtually inaccessible due to violence. Fighting among various armed groups has damaged or destroyed up to half the health facilities and schools in the province. 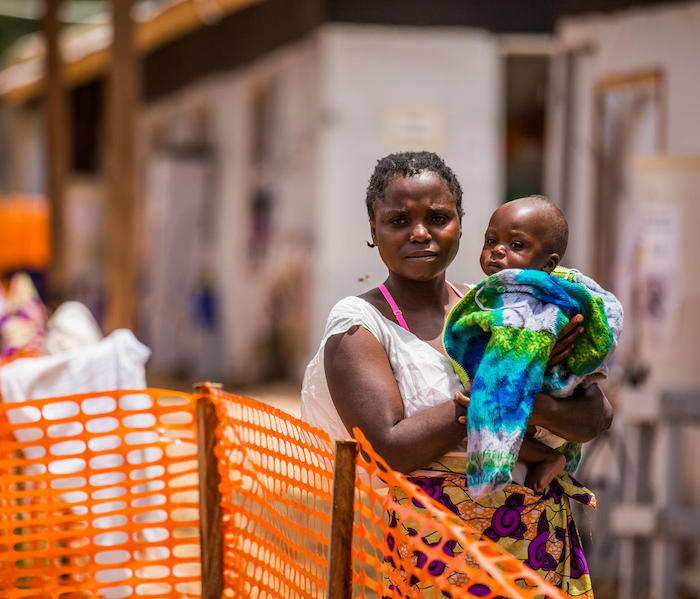 Masika, 31, holds her son, Japhet, 10 months, by their room in the quarantine area of the Ebola Treatment Center of Butembo, Democratic Republic of the Congo, March 22, 2019. © UNICEF/UN0311486/Tremeau

"The northeastern part of DR Congo is home to one of the worst humanitarian crises today," said Beigbeder. "Whether from measles, Ebola or the reality of living in a displacement camp, children are at grave risk. We must do everything we can to protect them."

Top photo: A health worker wearing a gown, gloves, mask and goggles checks a child potentially infected with Ebola being carried on the back of a caregiver at the Ebola Treatment Center of Beni, North Kivu province, Democratic Republic of the Congo on March 24, 2019. © UNICEF/UN0311518/Tremeau