Syria's brutal seven-year-long civil war has taken a staggering toll. Inside Syria, over 1.75 million children are out of school. An estimated 14 million people are living without safe, clean water to drink, sanitation or hygiene services. At least 30,000 people are injured every month in indiscriminate attacks and bombings in densely populated areas.

An attack on rebel-held Eastern Ghouta, on the outskirts of Damascus, that began in February killed more than 1,000 people in the first two weeks alone. The situation is so dire that last month, UNICEF issued a blank statement accompanied by a heart-wrenching message: "No words will do justice to the children killed, their mothers, their fathers and their loved ones."

An estimated 1.5 million people are living with permanent, war-related impairments, including 86,000 people whose injuries have led to amputations. Scores of children have been left with lifelong disabilities, both physical and mental. Almost half of all adults in Syria report having seen children who have lost the ability to speak since the start of the war.

Despite suffering injuries, lifelong disability and displacement, children's determination knows no bounds. When they and their families are provided with the support they need, children have overcome their disabilities to achieve their goals. Eight-year-old Hanaa (above) was paralyzed in a bomb blast in East Aleppo, Syria. For months afterward, she was afraid to leave her home. "I was scared and I couldn't even play with my sisters," she says. Then volunteers from a UNICEF-supported Child-Friendly Space brought her to visit the center, where she can play, sing and draw.

Hanaa dropped out of school for a year, but now she has resumed her education and loves writing, mathematics and learning to read. She also attends physiotherapy three times a week and is happy she is getting better, little by little. She has two wishes, one for herself and one for Syria: "My dream is to become a physiotherapist to help children like me," she says. "And my big dream is for peace to return to my country." © UNICEF/UN0177791/Al-Issa 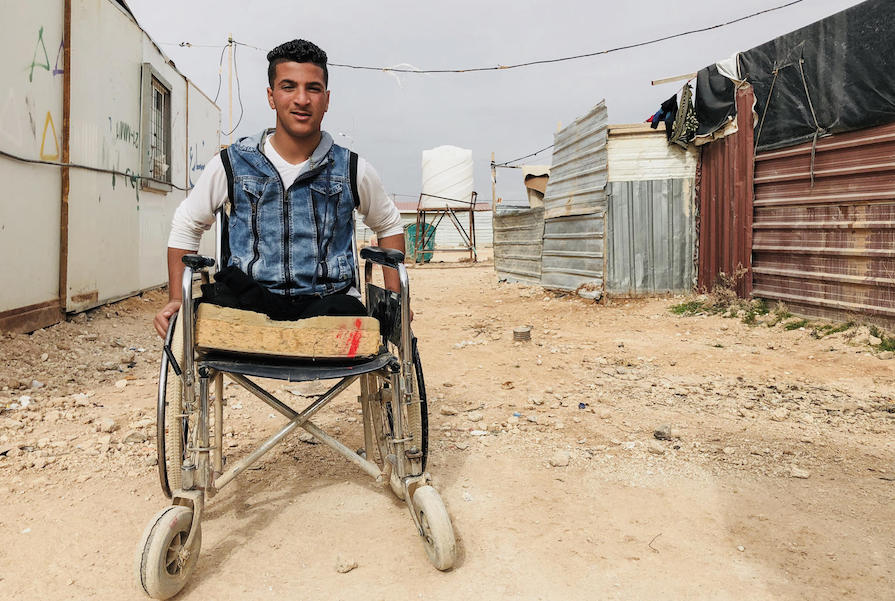 When Sami (above) was 14, a bomb exploded while he was playing in the snow in Dera'a in Southern Syria. The blast killed his cousins and injured him and his aunt. He remembers waking up in the hospital and wanting to walk, then realizing that both of his legs were gone. For the past four years, Sami has been living in Za'atari refugee camp in Mafraq Governorate, Jordan. He has prosthetic limbs, but gets around the camp with the aid of a wheelchair.

"When I was younger, I didn't like school," he says. "But in recent years, I realized how important school is. I really want to learn English." Forced to leave school so he could get medical treatment in Jordan, he remains undefeated: "No one is stronger than me" he says. "I want to paint and go to parties." © UNICEF/UN0174536/Hazou Syrian refugee Emine, 9, was seriously injured when a bomb exploded in the middle of her living room, killing her pregnant mother. Emine suffered damage to several organs in the blast and has had three operations. She and her four siblings (including her sister Zeynep, 7, above) arrived in Adana, Turkey with their father over a year ago. Despite her injuries and her young age, Emine has had to take responsibility and assist her father with the household chores. © UNICEF/UN0177798/Ergen

The family receives support from UNICEF through the AL-FARAH (My Happiness) Child and Family Support Center. The center helped the family enroll in the Conditional Cash Transfer for Education program, so that Emine and her three oldest siblings can attend school while their father, Ahmed, cares for their youngest brother, who is not old enough to go to school yet. "My children and their health are my priority," says Ahmed. "We have lost our home, our life. We have been through poverty and been cast here and there by the wind."

The conflict in the Syrian Arab Republic continues to drive the largest refugee crisis in the world, with 5.4 million Syrian refugees registered in the region. UNICEF has been on the ground since the war began in March 2011, working to provide urgent assistance to children affected by violence in Syria, including the millions of children driven out of the country.

Top photo: After Hanaa, 8, was paralyzed in a bomb explosion in East Aleppo, Syria, she was too afraid to leave her home. "I was scared and I couldn't even play with my sisters," she says. Volunteers at a UNICEF-supported Child-Friendly Space brought her to the center, where she can play, sing and draw. © UNICEF/UN0177793/Al-Issa