Families and children migrating from Haiti — some journeying for months if not years — are being expelled en masse from the U.S. border, among other destinations. The situation in the country they are returning to is fraught with multiple risks to children's health and safety. UNICEF is there, meeting urgent needs and responding to multiple crises, all to save and protect the most vulnerable.

August's devastating earthquake is the latest in a compounding series of crises in Haiti contributing to a recent surge in the number of children and women seeking to migrate from the country. They join those who left home months or even years ago in search of safety, some risking perilous journeys through dangerous terrain.

Many who reach the U.S. border are now facing expulsion.

Mexico, Bahamas and Turks & Caicos have also started a process to expel thousands of Haitians by plane, which will further strain the ability of local authorities — even with support from UNICEF and other UN agencies — to guarantee legal and social protection services. 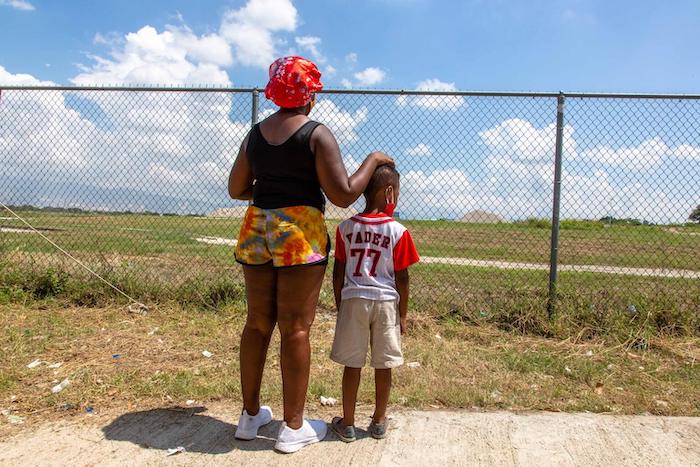 A mother and son look out over the airfield at Port-au-Prince airport shortly after being returned from the U.S. border. © UNICEF/UN0525745/Rouzier

“Haiti is reeling from the triple tragedy of natural disasters, gang violence and the COVID-19 pandemic,” said Henrietta Fore, UNICEF Executive Director. “When children and families are sent back without adequate protection, they find themselves even more vulnerable to violence, poverty and displacement – factors that drove them to migrate in the first place.”

Haitian migrants being returned to Haiti

UNICEF estimates that more than two-thirds of all Haitian migrants who have been returned to Port-au-Prince in recent days are women and children. Many are returning with nothing but the clothes they are wearing. They are exhausted from arduous journeys; many are survivors of violence and extortion.

Some are newborn babies, with specific and immediate needs. Initial assessments in Mexico and Haiti suggest that many of the children under age 10 were born outside Haiti or lived most of their lives in another country.

UNICEF is responding to the needs of returning Haitians through the provision of child protection, nutrition, and water, sanitation and hygiene (WASH) interventions at the Port-au-Prince and Cap Haitien airports and at the port in Cap Haitien for those returning by sea. UNICEF-supported teams are installing drinking water and handwashing stations and mobile toilets among other measures to prevent the spread of COVID-19 and other infectious diseases.

Temporary spaces have been set up to register arriving children and provide them with psychosocial support and recreational activities along with a welcome kit and clothes. UNICEF is also providing cash transfers to returning families to help buy food and other essentials. 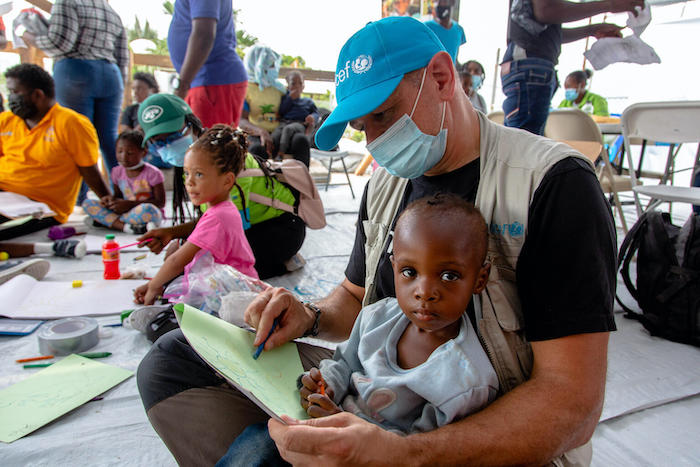 Laurent Duvilier, UNICEF Regional Chief of Communication in Latin America and the Caribbean, draws with 2-year-old Safmi upon her arrival from the U.S. border to Port-au-Prince airport, where UNICEF is providing a range of support and services to returning migrants, including child protection, water and sanitation, hygiene kits, psychosocial support and education/recreational supplies. UNICEF estimates that more than two-thirds of all Haitian migrants who have been returned to Port-au-Prince in recent days are women and children. © UNICEF/UN0525750/Rouzier

Some returnees are more recent migrants from southwestern Haiti — a region devastated by the Aug. 14 earthquake. The 7.2-magnitude quake killed at least 2,000 people, injured another 12,000 and destroyed 50,000 homes. Hundreds of thousands of children and caregivers remain in urgent need of humanitarian assistance. UNICEF is working with teams on the ground to provide health care and WASH services and other emergency relief.

“Haitian men, women and children who lost almost everything in the earthquake took a perilous journey in makeshift boats called “kanntè” with little or no security to find a better life for themselves and those they have left behind," said Bruno Maes, UNICEF's Country Representative in Haiti. "Children among these migrants are often undocumented and at high risks of child trafficking and sexual exploitation and abuse." 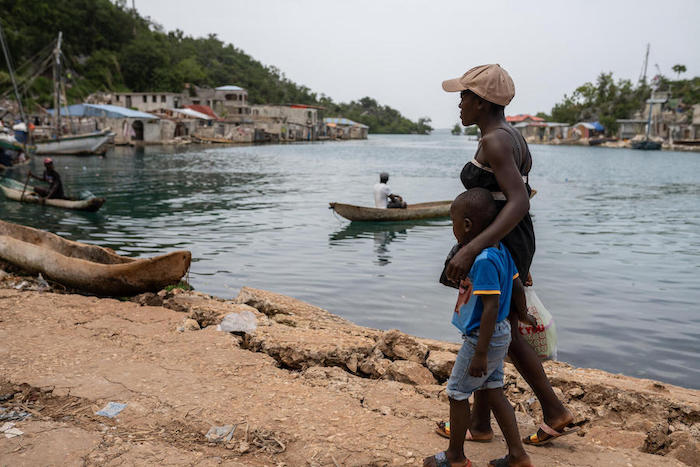 Mélienne Dessir's 18-month-old daughter was killed when a 7.2-magnitude earthquake struck Haiti on Aug. 14. She walks with her son not far from their damaged home in Pestel, a fishing village in the southwest that was devastated by the quake and faces a long road to recovery ahead. To help affected families, UNICEF is on the ground providing emergency aid including psychosocial support and access to safe water and hygiene kits, and working with authorities to rebuild schools and get students back to learning, despite the logistical and security challenges in the country. © UNICEF/UN0527147/Haro

A separate, related crisis is escalating at the Colombia-Panama border as more and more migrants attempt to make their way north through the Darien Gap, a stretch of jungle considered one of the most dangerous migration routes to North America. The number of children making the perilous journey has hit an all-time high: nearly 19,000 children so far this year, triple the number compared to the five previous years combined.

Though migrants that take this route come from as many as 50 countries of origin — some as far afield as Africa and South Asia — half of the child migrants are from Haiti, and half are under age 5. This year, more than 150 children — including newborn babies — have arrived in Panama without parents, a nearly 20-fold increase compared to last year.

In the Darien Gap’s dense tropical forest, migrant families with children are particularly vulnerable to violence, including sexual abuse, trafficking and extortion from criminal gangs. Children who cross the Darien Gap are also at risk of suffering from diarrhea, respiratory diseases, dehydration and other ailments that require immediate attention.

“Never before have our teams on the ground seen so many young children crossing the Darien Gap — often unaccompanied,” said Jean Gough, UNICEF Regional Director for Latin America and the Caribbean. “Such a fast-growing influx of children heading north from South America should urgently be treated as a serious humanitarian crisis by the entire region.” 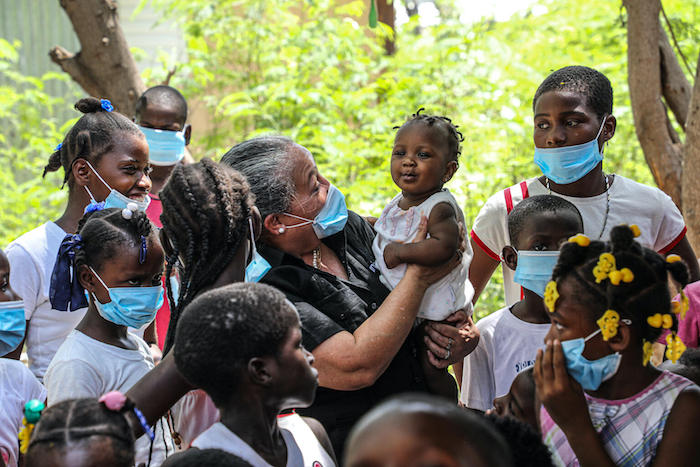 Jean Gough, UNICEF Regional Director for Latin America and the Caribbean, in Bass Delmas, Port-au-Pince, Haiti, visited with children receiving psychosocial support services from UNICEF during a six-day visit to the country in May 2021. © UNICEF/UN0469247/Moreno Gonzalez

Sexual violence is increasingly and intentionally used by criminal gangs as an instrument of terror. Between January and September 2021, UNICEF registered 29 reports of sexual abuse of adolescent girls during the journey. Many more women have reported sexual abuse. “It’s appalling,” Gough said.

UNICEF: meeting urgent needs of migrant children and families — wherever they are

In Colombia, UNICEF is working with partners to ramp up emergency services, particularly in the pier areas of Necoclí, where thousands of migrants are waiting for transportation alternatives into Panama. The numbers of those waiting are growing every day, outpacing the number of those being allowed to board boats for passage into Panama. Response efforts in Panama include: 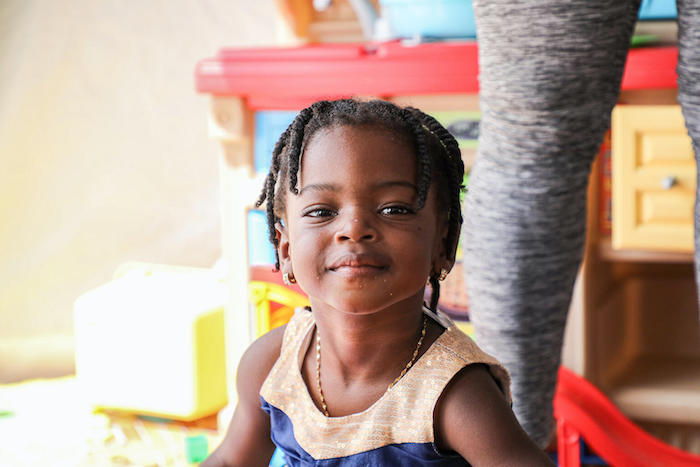 Maleyles, 3, plays at the UNICEF-supported Child-Friendly Space at the migrant reception station in San Vicente, Darien, Panama. Maleyles made the perilous journey with her parents, a traumatic seven-day crossing. © UNICEF/UN0433685/Moreno Gonzalez

In keeping with its longstanding position on migration, UNICEF continues to urge governments to ensure the protection of children on the move throughout their journeys and to coordinate the rollout of a more robust humanitarian response across all countries involved.

UNICEF also advocates for integrating migrant families into host communities and addressing the root causes that lead them to migrate in the first place. To that end, the ongoing earthquake response includes building or repairing basic social infrastructures to shore up affected communities — taking the 'build back better' approach long considered critical for deterring the perilous migrations that put lives of children and parents and caregivers at risk.

UNICEF is appealing for support to assist returning migrants and to help fund the ongoing earthquake response. Your contribution can make a difference. Donate today.