UNICEF has directly supported more than 1 million children in Sulawesi with vital services — and will continue to help as long as the need remains.

UNICEF and partners are working tirelessly around the world to save and protect children.

It has been one year since a deadly 7.4-magnitude earthquake triggered a tsunami on the Indonesian island of Sulawesi, killing 2,000 and seriously injuring 4,400. Waves up to 20 feet high battered the city of Palu, damaging and destroying houses and tearing families apart.

In some places, the soil liquified, swallowing up whole neighborhoods and trapping people alive. An estimated 212,000 people were displaced from their homes. Some set up tents or makeshift shelters next to their ruined houses, others sought refuge in informal settlements. Around 525,000 children were left without access to basic nutrition, health and education services. 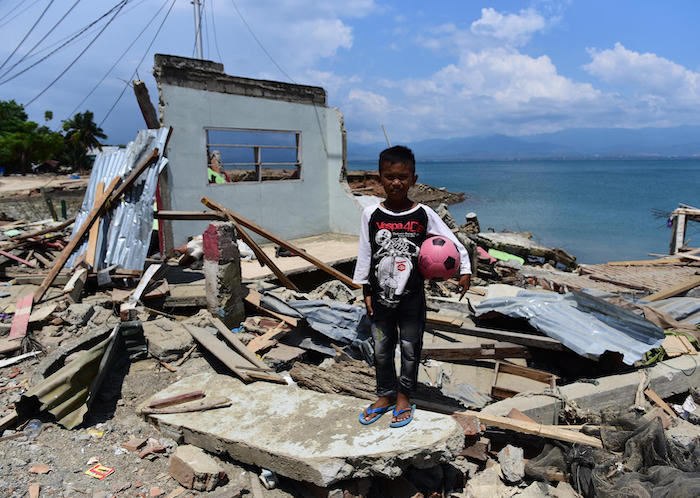 UNICEF was the first United Nations agency to transport 94 metric tons of essential emergency supplies to Sulawesi from a neighboring island, including 200 School-in-a-Box kits filled with educational supplies, 200 "Schools in a Tent" and 50 Early Childhood Development kits.

"In times of crisis, getting children back into the classroom is a vital way of returning a sense of normality to children's lives, providing a safe space for children to learn, play and also a chance to begin to deal with any trauma they may have experienced," said Debora Comini, UNICEF Representative in Indonesia.

Since those early days in September 2018, UNICEF and partners have reached more than 1 million children and family members with critical humanitarian assistance, including child protection, education, water and sanitation, health and nutrition services. Efforts to help families recover and rebuild are still underway. 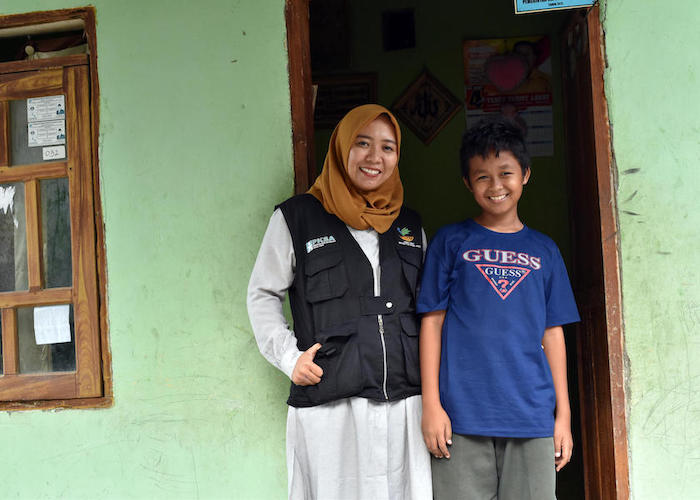 Six months after an earthquake and tsunami hit Central Sulawesi, Indonesia in September 2018, UNICEF-supported social worker Chi Ramadhani checks in with Rivaldi, 13, outside his family home in Palu. Rivaldi was separated from his family for three days, until Ramadhani was able to locate his father and reunite them. © UNICEF/UN0292628/Donnell

In the chaos after the twin disaster, many children became separated from their families. UNICEF Indonesia provided technical and financial support to the Ministry of Social Affairs, deploying an additional 68 social workers and staff to Central Sulawesi to provide urgent family tracing and reunification assistance.

The local Department of Social Affairs received 118 requests for the tracing of missing children. Of these, 49 unaccompanied children were successfully identified and 47 were reunited with their loved ones. The remaining children are presumed to have died.

Rivaldi, 13, was getting a haircut when the earthquake hit. He spent three days at an evacuation center before a UNICEF-supported social worker found his father.

Thirteen-year-old Rivaldi (above) was one of the survivors. He was getting a haircut when the earthquake hit. A police officer took him to an evacuation center, but he had no idea what had happened to the rest of his family.

Rivaldi's father, Pak Bakir, searched for his son for three long days. "Somehow, I knew he was somewhere safe," said Bakir. Through the family tracing and reunification program, social worker Chi Ramadhani finally found the boy and reunited him with his father, who told him that his mother had died in the tsunami.

Six months after their reunion, Ramadhani visted Rivaldi at his home, to see how he was handling the trauma he experienced. "I see him having a joke with his father, laughing together," she said. "It's a good sign."

Nearly a year ago, a devastating series of earthquakes and tsunami waves struck the Indonesian island of #Sulawesi.

With our partners, UNICEF was able to help more than 1.3 million children — like Ica below — get the support they needed. #ForEveryChild, a chance to sing. pic.twitter.com/5AJxKXky5r

Two-year-old Ica (above) was in a shopping mall with her mother and older brother, 11-year-old Gifaril, when the tsunami hit. The experience was so terrifying, Ica cried for weeks afterward, her mother recalls. "But she was always following Gifaril to the UNICEF tent."

Two-year-old Ica cried for weeks after the tsunami. Regular visits to a UNICEF Child-Friendly Space gave her a place to play and feel safe again.

The tent housed one of the Child-Friendly Spaces UNICEF set up across the region to give distraught children a place to rest and relax, safe from the uncertainty and devastation around them. "She also learned to sing a song about a lizard," her mom said. "And now it's her favorite song."

To date, more than 21,000 children and young people in Sulawesi have visited UNICEF Child-Friendly Spaces and temporary classrooms to play and learn and receive psychosocial support. 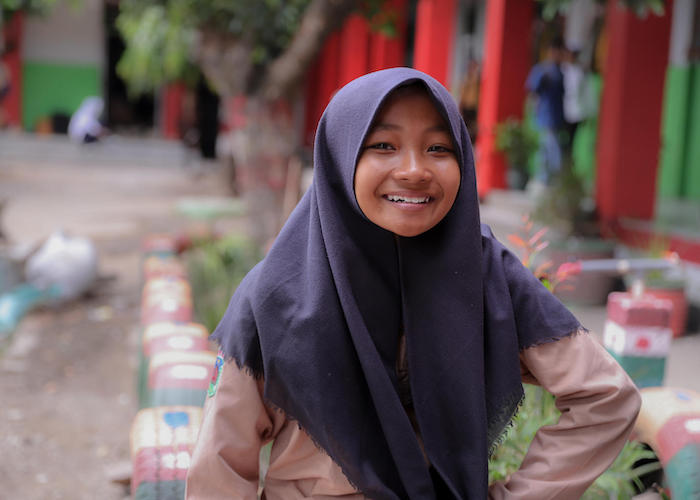 Sophia, 12, and her friends resumed their studies in a UNICEF tent one month after a tsunami struck Palu, Central Sulawesi, Indonesia in September 2018. Now, one year later, they're back in their school building. "I hope my friends and I can finish our studies without worrying about the disaster anymore," she said. © UNICEF/UNI206528/Veska

Over 1,500 schools were damaged or destroyed, leaving approximately 184,000 students with nowhere to study. While more than 1,000 school buildings in Sulawesi are still unusable, 135 have recently been declared safe. Some 142,933 children in Central Sulawesi have resumed their educations in temporary learning centers and semi-permanent schools, including 450 tents installed by UNICEF. A total of 58,553 children are receiving education support through UNICEF.

A month after the tsunami, Sophia, 12, and her classmates resumed their studies in a UNICEF school tent

A month after the tsunami, Sophia, 12, and her classmates resumed their studies in a UNICEF school tent while the safety of her school building was being assessed by a UNICEF team.

A year later, she and her friends are back in their original school building. "It was not easy for the students to study in the classroom because they were still afraid," said Palu teacher Sulawesi Tengah. "But after they got psychosocial support, they were able to accept the situation and go back to school without any worries of disaster anymore." 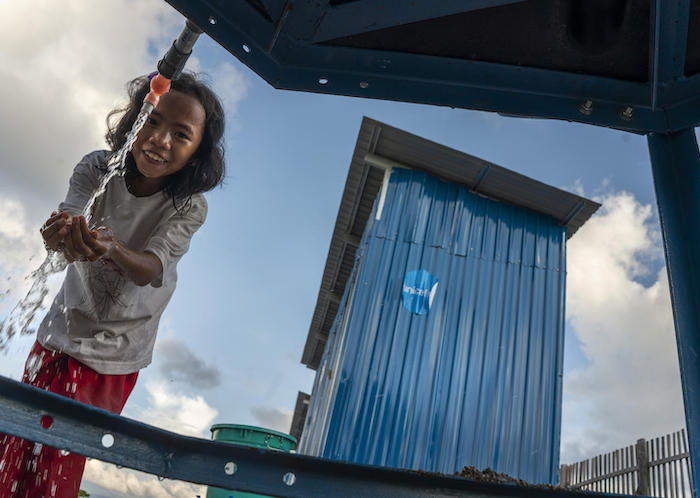 In Donggala, Central Sulawesi, Indonesia, a girl washes her hands near toilets built by UNICEF in temporary shelters for survivors of the September 2018 earthquake and tsunami. © UNICEF/UNI209339

After the disaster, UNICEF and partners collaborated to provide safe drinking water to schools, health care facilities and families living in temporary houses by constructing a system of boreholes, shallow wells and mini water treatment plants. To date, more than 450,000 people have been reached with safe water.

On September 9, 2019, 12-year-olds Biyan (left) and Sisal wash their hands at sinks installed by UNICEF at their school in Donggala, Central Sulawesi, Indonesia. © UNICEF/UNI206458/Wilander

To prevent the disease outbreaks that often follow natural disasters, more than 776,000 children were vaccinated against measles and rubella in the months after the earthquakes. UNICEF also gave bed nets to 58,164 families to protect against malaria and trained primary health care workers on how best to manage newborn and childhood illnesses in camps for displaced people where illnesses can travel quickly. And to make sure infants and young children received adequate nutrition, around 72,000 parents were given nutrition counseling.

"In a country prone to natural disasters, it is crucial that we work together to help children at their most vulnerable," said Comini. "But it is even more crucial to build a world that is truly resilient and protective of its most precious, youngest inhabitants."

As recovery and rebuilding efforts continue, much more needs to be done for children, families and communities. UNICEF will continue to support efforts in the affected areas as long as the needs remain.

UNICEF provides the assistance and services children need to survive and thrive. You can help.