Where Are Indonesia's Missing Children?

Six months after an earthquake and tsunami devastated the island of Sulawesi in Indonesia, 118 children have been officially registered as "missing." UNICEF New Zealand's Ethan Donnell examines ongoing efforts to find lost children and reunite them with their families.

Even six months after his life changed, Pak Bakir’s days begin essentially the same. He wakes before dawn and spends his morning in the cornfields on the Indonesian island of Sulawesi. The whistle of a breeze against the stalks is a second language to him. He knows, instinctively, when to harvest the plants, which of them will produce two ears rather than one.

The family home stands in the middle of a graveyard. A short patch of unsealed asphalt marks the boundary. In the afternoon, Bakir navigates the rows of tombstones, ending at his front door.

His wife would often have coffee waiting for him. Now that he’s a single father of five, his children pitch in where they can. His 13-year-old son, Rivaldi, prepares the coffee today.

Rivaldi knows his father takes his coffee with a little sugar. But, overenthusiastic in his motions, he heaps sugar into the mug. His father brings the cup to his mouth, wincing as he swallows. Too sweet. He takes a second sip anyway.

“My son made this coffee for me,” he explains. “I will drink every last drop.”

For three days after the earthquake, Pak Bakir didn't know if his 13-year-old son, Rivaldi, was alive or dead

He knows to take nothing for granted. For three days after the earthquake and tsunami hit Sulawesi in September 2018, he didn’t know if Rivaldi was alive or dead. His son was one of an estimated 300 children thought to be separated from their families in the days and weeks after the dual disasters. More than 100 children would later be registered as missing.

Even as he frantically searched for his son, he tried to process the loss of his wife. The Palu Nomoni Festival — a popular, traditional music festival — was being held that day on Talise Beach, the exact point where the tsunami made landfall. She was working in the marketplace along the coast, selling corn from the harvest. The next day, Bakir told his children to accept their mother was gone. Her body has never been recovered. 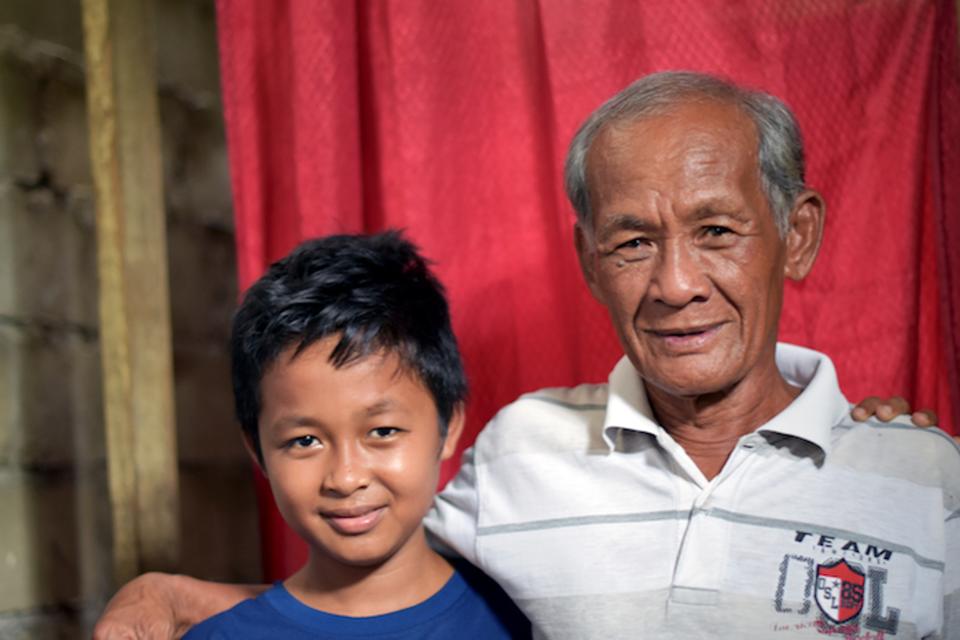 Rivaldi's mother is presumed to have died in the September 2018 tsunami. Now the 13-year-old does what he can to help his father, Pak Bakir, and his four siblings at home in Palu, Central Sulawesi. © UNICEF/UN0292618/DONNELL

In the days after they were reunited, father and son spoke uncharacteristically often.

“I spent a lot of time talking with him, heart to heart,” says Bakir, struggling to access the emotional vocabulary needed to express this sentiment. The wisdom he shared with his son might best be described as “time heals all wounds.” He tried to comfort him. “Your mother is in a better place,” he remembers saying.

But, even after six months, he hasn’t had time to grieve. The memory still causes him to weep.

In the Palu Social Office, 118 missing children reports are stored in binders. A 6-year-old girl last seen walking to the markets. Siblings assumed to be at home at the time of the earthquake. Each different story written in crisp, official language.

Where are these children?

In the Palu Social Office, 118 missing children reports are stored in binders

The most likely scenario is that many perished in mudflows following the earthquake as a result of liquefaction. The liquefaction swallowed entire villages, thousands of people. Shortly after the disasters, Indonesian flags were hoisted in the mud, marking spots where bodies were entombed. Six months later, these flags are ragged and torn, the bodies buried beneath still yet to be retrieved. 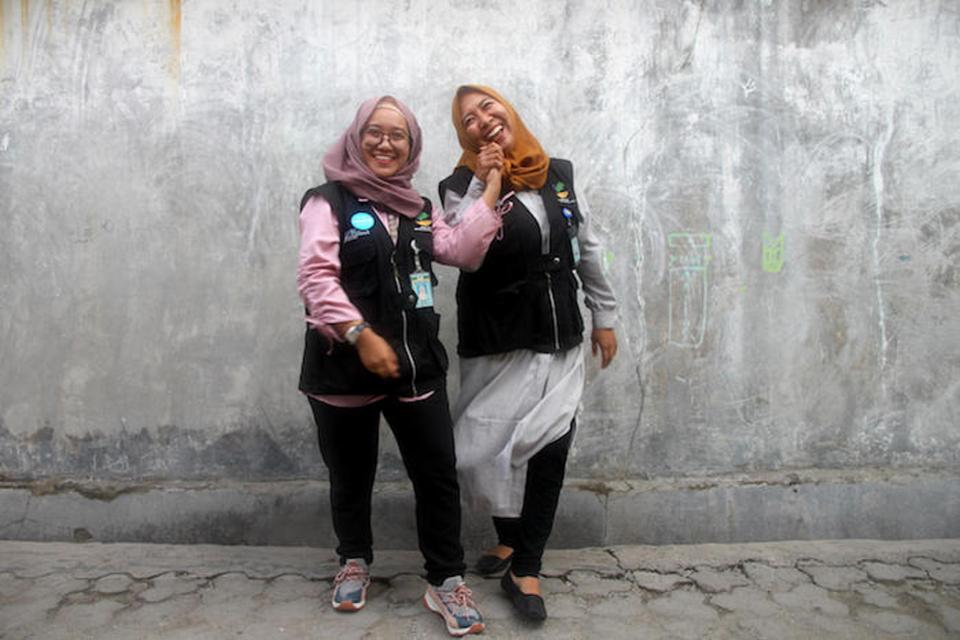 Pak Febraldi Etgan is a section chief for the Ministry of Social Affairs. Much of his work since the earthquake has involved tracing missing children.

The work, he says, is complicated by the practice of undocumented mass burials. Such burials were carried out frequently without names or physical criteria for later identification being noted down.

There is good reason — and precedent — for the government’s policy. After the 2004 tsunami in Aceh, 37,000 people were declared missing.

The tsunami destroyed entire villages and displaced many people, tearing families apart and scattering the pieces across a vast geography

The tsunami destroyed entire villages and displaced many people, tearing families apart and scattering the pieces across a vast geography. In some cases, children were too young to accurately identify next of kin until much later. Some of these children survived due to the kindness of strangers, others lived on the streets. “There were children who were found alive after many, many years,” explains Febraldi, contextualizing those circumstances.

Even so, the odds are not good.

Social worker Kina Sidik says she still receives phone calls most days from the parents of missing children. Trapped between grief and hope, they still believe their lost children might someday come home.

“I understand that all they need is confirmation whether their child is alive or dead.”

She mentions a recent conversation with a parent whose son is missing, tears forming in her eyes. “They said that after five months, they realize he is gone. They are ready to let go.”

Sidik says that she consoles parents, often encouraging them to turn to prayer, and tries to give them strength. Then she corrects herself. “In fact, it is them who give me strength,” she says. “And I know, in my heart, that we will keep doing our best to find their children.”

During these six months, that hard work has resulted in 47 children being reunited with their families.

The family tracing and reunification program — a collaboration between UNICEF Indonesia and the Social Ministry of Palu — uses an online platform, Primero, to automatically match unaccompanied children with physical descriptions and other data held in missing children reports.

Fifty-six social workers have now been trained by UNICEF to enter data on Primero, both its web and mobile versions. They input the missing child’s name, gender, date of birth and address, as well as parental information, and a short chronology of how the child and parent were separated.

When a match is made, social workers split into two teams — one team meeting with the parents, the other team with the child — to verify the match.

There were fears after the twin disasters that children were being claimed by strangers, and that some children might be sold into trafficking

There were fears after the twin disasters that children were being claimed by strangers, and that some children might be sold into trafficking. Fortunately, there have been no confirmed cases so far.

Social workers have found children being taken care of by persons not their parents, typically extended family, but with the parents’ consent. Sidik says, in those cases, social workers would simply confirm the child was receiving the best care possible under the circumstances.

But one thing never changes for her.

“Every time I see a child reunited with their family, it means a lot to me,” says Sidik. “In that moment, I feel like I am part of their family.” 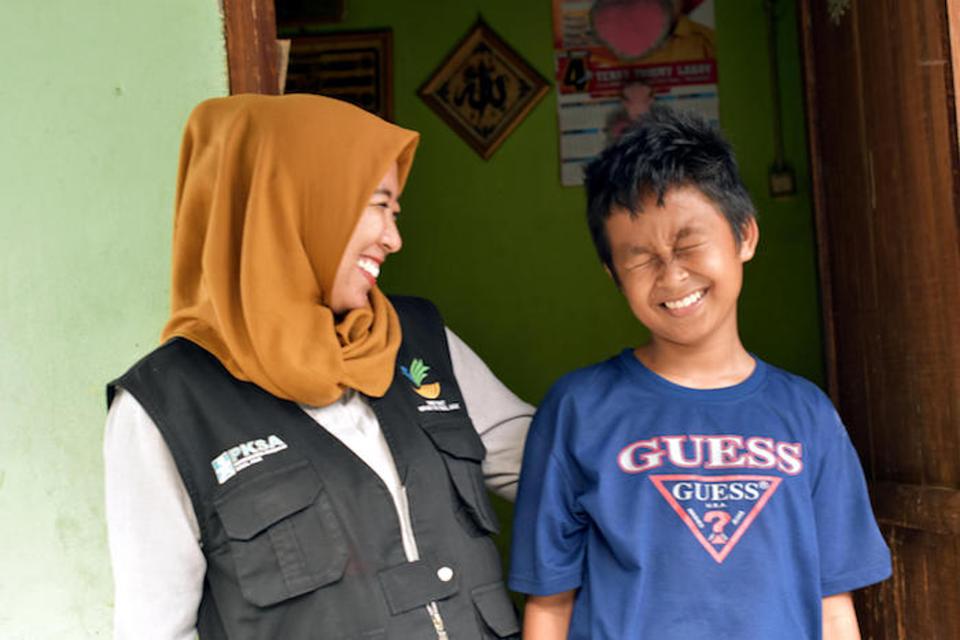 UNICEF-supported social worker Chi Ramadhani stands with Rivaldi, 13, outside his family home in Palu, Central Sulawesi. Ramadhani was the social worker who reunited Rivaldi with his family. © UNICEF/UN0292631/DONNELL

Bakir helps Rivaldi corner a chicken, who, having eluded the teenager’s grasp, runs amok among the tombstones. The two of them circle like predators, closing in slowly. Bakir pounces on the chicken, handing the captured bird to his son. Rivaldi holds him by the legs, stroking the tufts of feathers.

Rivaldi is clearly embarrassed by this display of disobedience. “He normally does as I say.”

He has a brood of six chickens, and refers to this one as his best friend. “I feed him with rice and corn,” says the boy, opening his palm to reveal this taming device.

Social worker Chi Ramadhani watches. She has seen Rivaldi a few times since she helped reunite the boy with his family. Psychosocial support in the form of follow-up appointments is an important part of the reunification process. Today, he seems different.

“I see him having a joke with his father, laughing together. It’s a good sign,” she says.

“When I first met him, he seemed afraid to meet new people. He would only say one or two words.”

Rivaldi had been walked with friends, on his way to get a haircut when the earthquake hit

Rivaldi had been walking with friends, on his way to get a haircut when the earthquake hit. His younger sister also went missing, but was found the next day. Three other siblings were at the family home during the quake. In the immediate aftermath, the boy and his friends were picked up by a police officer and taken to an evacuation center.

His father didn’t know this at the time. For all he knew, his son might have been at the markets with his mother. And yet something told him everything would be all right.

“I had a strong instinct,” says Bakir. “Somehow, I knew he must be somewhere safe.”

Three days passed before that inkling was proven correct. Because Rivaldi was a little older, he was able to tell social workers his family name and roughly where he lived. Ramadhani visited Bakir and was quickly able to verify the information. The very next day, the boy returned home to his family, and to his chickens. All six of them still alive, including his best friend. 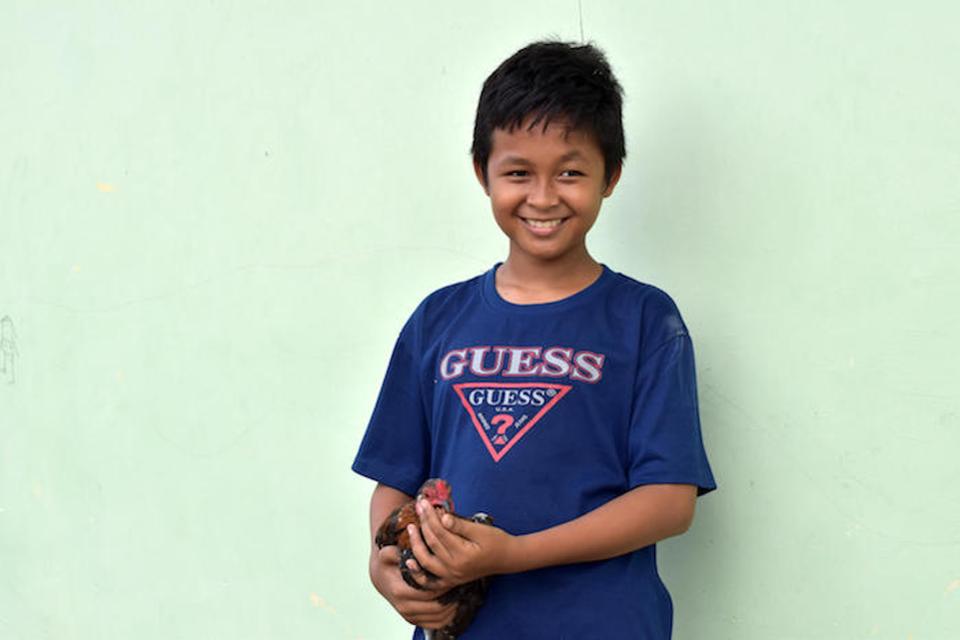 Rivaldi, 13, holds one of his six chickens outside the family home in Palu, Central Sulawesi. After he finishes school, he wants to be a chicken and goat farmer. © UNICEF/UN0292625/DONNELL

Ramadhani is impressed with the progress the boy has made in the six months since. “I’m sure he still has wounds in his heart,” she says, speaking about his mother, presumed dead. “I wish for him to be a strong child.”

And what does Rivaldi wish for the future? He says that in a few years, once he completes his final school exams, he wants to become a farmer. Like his father. Except he won’t spend his mornings in the cornfields. Instead he wants to move closer to the village, buy a plot of land and graze animals.

“It’s easy to find feed for chickens and goats at the village,” he reasons.

What does Rivaldi wish for the future? He says that in a few years, once he completes his final school exams, he wants to become a farmer

Bakir has heard about his son’s plans, and wants to give him a head start. He’s saving money, in secret, to buy Rivaldi a goat — his very first.

This covert mission gives his early mornings renewed purpose. As he stands amongst his crops, he imagines his son, a grown man, in a paddock one day surrounded by livestock. He isn’t simply indulging his son’s interest. He’s trying to lock in a sense of security for him, to transform a childhood that might otherwise be marked by loss.

Please support UNICEF's efforts to reunite children with their families.

Top photo: Rivaldi, 13, was missing for three days after an earthquake and tsunami hit Central Sulawesi, Indonesia in September 2018. UNICEF Indonesia helped reunite him with his father, Pak Bakir. © UNICEF/UN0292618/DONNELL