Childhood in the 21st Century: Insights from a UNICEF/Gallup Poll

Young people are optimistic about the future yet far from complacent. These and other findings from a first-ever multigenerational, international survey of what it means to be a child in today's world — and what the future holds.

How do young people see the world differently than older people?

Earlier this year, UNICEF and Gallup conducted telephone interviews with over 21,000 people — some aged 15 to 24, some 40 and older — seeking answers to these questions. Responses were collected from 21 countries representing all regions and income levels from February to June 2021.

The first international poll of its kind, the survey set out to explore how childhood is changing at a time of rapid transformation in the world; to better understand what it means to be a child today, and to compare the perspectives of different generations.

The results, documented in The Changing Childhood Project: A multigenerational, international survey on 21st century childhood, show a significant gap between generations in terms of how the young identify with the world around them, their outlook and their values.

The results also show young people in poorer countries are a bit more optimistic than their counterparts in wealthier ones.

“In a lot of the developing world, there is a bit more optimism that yes, with each generation our living standards are improving,”  Laurence Chandy, Director of UNICEF's Office of Global Insight and Policy, told the New York Times. “But there’s a recognition in the West that’s stopped happening.” 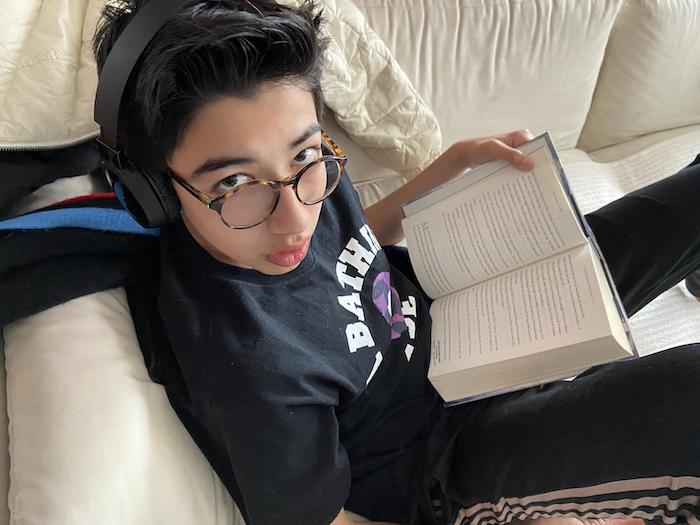 Jack, 14, on his first day of distance learning during the coronavirus pandemic. Over half of young people ages 15 to 24 in the U.S. surveyed for the UNICEF/Gallup Changing Childhood Project poll said that children today would be economically worse off than their parents (vs. 64 percent of older people), a view that squares with reality. The best part of being young today: technology, according to follow-up interviews conducted by the New York Times. © UNICEF/UNI313115/Adelson

In the face of unfolding crises, including COVID-19 and the climate crisis, and despite rising inequality and struggles with mental health, young people are more likely to believe that the world and childhood itself is getting better with each generation.

They are optimistic about the future — yet far from complacent.

Born into a more digital, interconnected, and diverse reality, young people see a world that is largely a better place for children than the one their parents grew up in – a safer and more abundant world that offers children better education, opportunities, and hope for the future. Young people in at least 15 of the 21 countries polled are more likely than older people to say that their physical safety, quality of education and health care, opportunities to play, and access to clean water and healthy food had all improved.

At the same time, a majority of young people reported struggling with their mental health. They recognized the benefits as well as the risks associated with their increasingly digital lives, noting low levels of trust in information sources they use most. And they seek action on climate change, discrimination, LGBTQ+ rights and other issues. They are more likely than older adults to trust science and medical institutions, and more likely to consider themselves global citizens.

Young people are more certain of the benefits of online engagement than older people across all categories, poll results showed. “It’s a positive thing that people from far away villages are getting news about what is happening [elsewhere] in our country just [by] sitting at home,” 17-year-old Shamim of rural Bangladesh told pollsters. © UNICEF and Gallup, Inc., The Changing Childhood Project, November 2021

"Comparing the experiences and views of young people with those of older adults offers a powerful lens through which to view how childhood is changing, and where cleavages between the generations are emerging," the report notes.

Those cleavages cut across country income levels, gender and other factors. The generation gap is stronger in wealthier countries than in developing countries, and young women and men are more likely to be aligned with each other than males and females in the older age group.

“There is no shortage of reasons for pessimism in the world today: Climate change, the pandemic, poverty and inequality, rising distrust, and growing nationalism," said UNICEF Executive Director Henrietta Fore. "But here is a reason for optimism: Children and young people refuse to see the world through the bleak lens of adults.

"Compared to older generations, the world’s young people remain hopeful, much more globally minded, and determined to make the world a better place. Today’s young people have concerns for the future but see themselves as part of the solution.” A 16-year-old activist speaks at a demonstration in New York City where thousands of youth joined the call for global action to combat climate change. Nearly half of the 15- to 24-year-olds in the U.S. surveyed for the UNICEF/Gallop Changing Childhood poll said they believe it is very important for political leaders to listen to children. © UNICEF/UNI207009/Chalasani

For UNICEF, it's about keeping young people's experiences and perspectives front and center

A better understanding of young people's experiences and perspectives will help UNICEF center those experiences and perspectives in its work improving life for all children, today and into the future. The challenge now, as the report notes, is to listen to these views on childhood and the world, consider their implications — and meet young people’s optimism with action.

Young people want faster progress in the fight against discrimination, more cooperation among countries, and for decision-makers to listen to them, poll results showed: “While this research paints a nuanced view of the generational divide, a clear picture emerges: Children and young people embody the spirit of the 21st century far more readily than their parents,” Fore said. “As UNICEF prepares to mark its 75th anniversary next month, and ahead of World Children’s Day, it is critical we listen to young people directly about their well-being and how their lives are changing.” 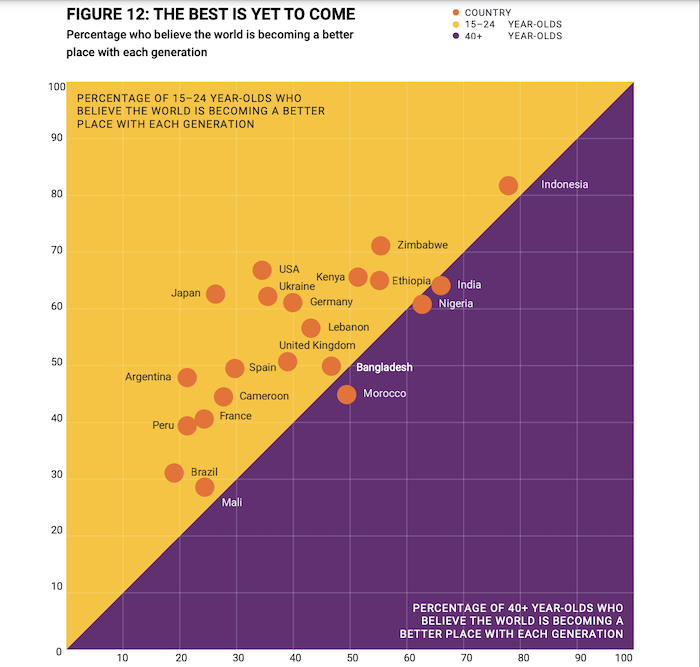 Percentage of UNICEF/Gallup poll respondents by country that think the world is becoming a better place with each generation. For more information about the UNICEF/Gallup survey results and analysis, visit changingchildhood.unicef.org © UNICEF and Gallup, Inc., The Changing Childhood Project, November 2021.

To learn more, visit UNICEF's interactive Changing Childhood website for a deeper dive into the project and poll findings. The full report is available in English, French, Spanish, and Arabic; methodology, survey, microdata and codebook are all available for download.

Top photo: Malian girls attend after-school activities supported by UNICEF at the Mberra refugee camp in Mauritania. According to the results of the UNICEF/Gallup Changing Childhood poll, children and young people are nearly 50 percent more likely than older people to believe that the world is becoming a better place with each generation. © UNICEF/UN0548477/Pouget