UNICEF is working with partners to protect children traumatized by the fires, and to support solutions and policies that create an environment fit for children.

An unprecedented disaster is unfolding as the fiercest bush fires on record continue to wreak havoc across large parts of Australia. At least 28 people have died and an estimated 1 billion animals have been affected nationwide.

Thousands have been forced from their homes by the Australian bush fires; air quality is hazardous

First responders are struggling to contain the massive fires, which have scorched millions of acres of land across Australia since October. In the state of New South Wales alone, more than 3,000 homes have been destroyed or damaged. Haze from the fires is filling the skies, creating hazardous air quality. 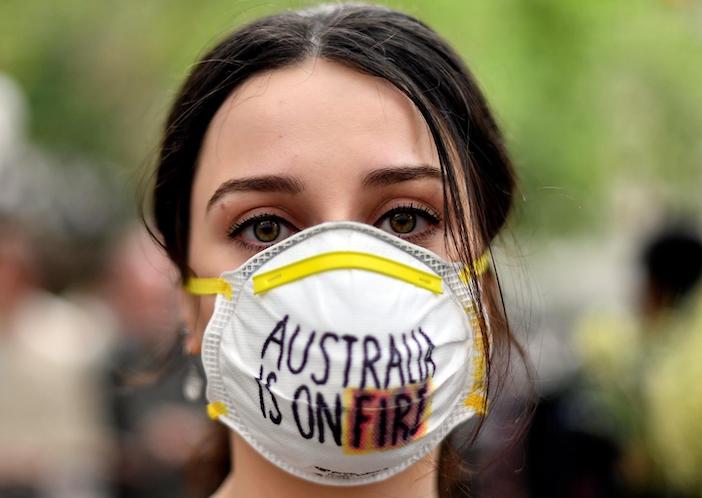 A demonstrator with a mask attends a climate protest rally in Sydney, Australia on December 11, 2019. Up to 20,000 protestors rallied to demand urgent climate action from Australia's government as smoke from the bush fires choked the city, causing health problems to spike. © UNICEF/UNI266320/Khan/AFP-Services

As first responders battle the blaze, UNICEF Australia is working with partners to help traumatized children recover and get back to school

In a humanitarian emergency, children are always the most vulnerable. UNICEF Australia is working at the local level with both individual state ministries and NGOs to provide support for Australia's children in three areas:

Climate change has exacerbated weather conditions in Australia, paving the way for this year's devastating fires. The country is experiencing one of its worst droughts in decades and this past spring was the driest on record.

Michael Mann, Director of the Earth System Science Center at Pennsylvania State University, said, "If anything, 2019 saw even more profound extreme weather events around the world than [2018], including wildfires from the Amazon through to the Arctic, devastating out-of-season, simultaneous wildfires in California and Australia, winter heat waves and devastating superstorms. With each day now we are seemingly reminded of the cost of climate inaction in the form of ever-threatening climate change-spiked weather extremes."

Climate change will only bring more severe weather events, and young people want to be a part of the solutions and plans that are devised and funded. UNICEF will be there every step of the way to support the rights of young people to be heard and to help them advocate for the changes needed to protect the environment and create a world fit for children. Children play at the showgrounds in the southern New South Wales town of Bega where they are camping after being evacuated from nearby sites affected by bushfires on December 31, 2019. © UNICEF/UNI266318/Davey/AFP-Services

UNICEF has decades of experience responding to and preparing for emergencies. Working with partners around the world, UNICEF protects children from the impact of climate change-related crises and supports disaster preparedness and risk reduction programs to make vulnerable communities more resilient.

"The biggest reason for hope," UNICEF Executive Director Henrietta Fore wrote in an Open Letter to the World's Children in 2019, "is because you — the children and young people of today — are taking the lead on demanding urgent action, and empowering yourselves to learn about and shape the world around you. We want to work together with you to find the solutions you need to tackle the challenges of today, to build a better future for yourselves and the world you will inherit."

Read more about how UNICEF and partners are working to curb the impact of climate change and build a safer, more sustainable world for children.

Photo at top: Burning embers cover the ground as firefighters battle against bush fires around the town of Nowra in the Australian state of New South Wales on December 31, 2019. Thousands of vacationers and locals were forced to flee to beaches in fire-ravaged southeast Australia as blazes ripped through popular tourist areas, leaving no escape by land. © UNICEF/UNI267456/Khan/AFP-Services