Kids Entertainment Professionals for Young Refugees (KEPYR) is an all-volunteer nonprofit founded in 2017 by a group of international children's media professionals — writers, artists, actors, producers and executives — who were eager to see their industry play a larger role in helping to address the global child refugee crisis. The organization's mission is twofold: to educate the children's entertainment community about the true scope and scale of the ongoing crisis and to provide the community and others with an easy way to take action by directly supporting UNICEF's refugee relief work.

All of us in this business, no matter what we do or where we are, share a common love of children and a reverence for the very idea of childhood.

"Anne of Green Gables" fans will recognize the classic line that inspired the title of the annual month-long KEPYR fundraiser for UNICEF refugee relief: “Kindred spirits are not so scarce as I used to think. It's splendid to find out there are so many of them in the world.”

Grant Moran, President and Founder of Kids Entertainment Professionals for Young Refugees, which has held the Kindred Spirits fundraiser in the weeks leading up to June 20, World Refugee Day, every year since 2016, says he named it that because “All of us in this business, no matter what we do or where we are, share a common love of children and a reverence for the very idea of childhood. As professionals, we're connected in that profound way.” 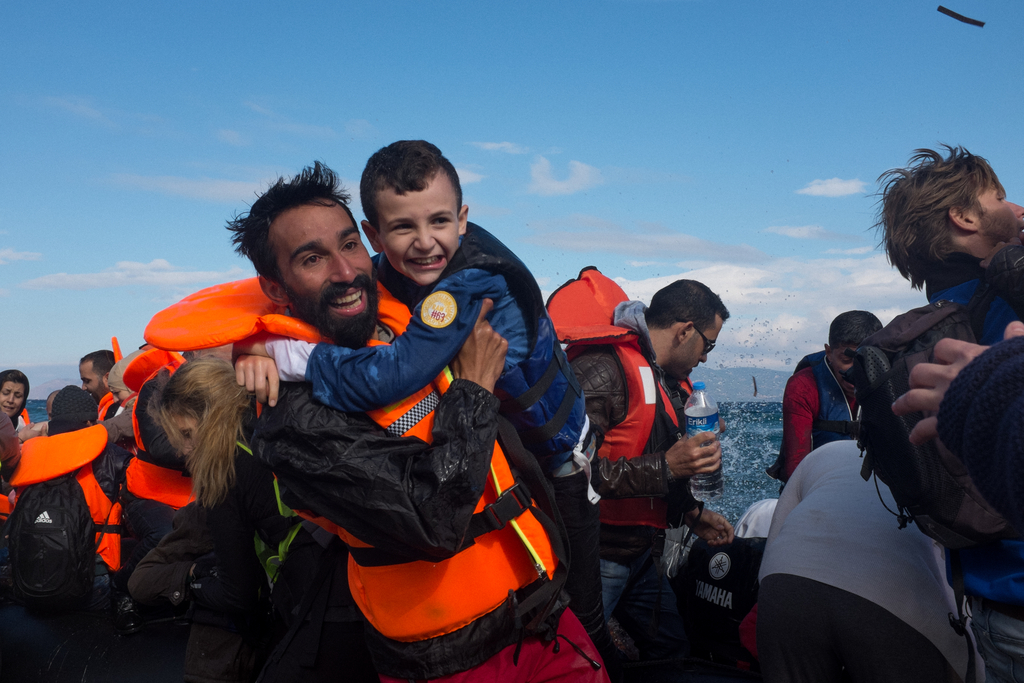 On September 30, 2015, volunteer Kinan Kadouni, 26, and the boy he is carrying, both refugees from Syria, laugh amid other newly arrived refugees and the volunteers helping them, following their arrival on the shores near the village of Skala Eressos, on the island of Lesbos, Greece. © UNICEF/UNI197517/Gilbertson VII Photo

Moran says he was inspired to found KEPYR after seeing images of the Syrian refugee crisis on TV. As he learned more about the scope of the global refugee crisis, he knew he had to take action. He was suprised to discover that there was no organization rallying the global kids' media industry around the issue of child refugees.

So, Moran activated his network knowing that people in this business went into the profession because of their deep and emotional relationship to childhood. “For these artists, childhood is sacred,” he says. The reason why he chose to specifically support UNICEF’s relief work, he says, is that “For UNICEF, childhood is sacred as well ... They help address what’s urgently needed such as tangible aid, but also work on a macro level with local governments to address policy.” Grant Moran, President and Founder of KEPYR. Moran has been a writer, story editor, producer and executive in kids and family entertainment for 25 years. He's contributed to award-winning series including "Rugrats," "Tiny Toon Adventures," "Bob The Builder," "Batman: The Animated Series" and "Marvel's Spider-Man." In 2015, he won an Emmy Award for his work as head writer on the PBS Kids series, "WordGirl." © photo courtesy of Grant Moran

The first couple of years, he got the word out by spreading awareness at the various conferences he attended. He would open by sharing the story of his own growth of consciousness on this issue. He could not, as he recalls, “get through my remarks without welling up.” Fellow children’s media professionals were inspired and KEPYR hosted its first fundraiser shortly after.

What Moran didn't anticipate was how his peers' involvement in supporting the cause he was so passionate about would change his own relationships with people in the business. “We never would have connected on this level,” he says.  Connecting with others on the impulses that drew them to the business in the first place is “re-inspiring.”

When forced displacement causes so many millions of children to suffer so terribly, often effectively denying them their childhoods, it affects us deeply. Fred Rogers said: "We are intimately related. May we never pretend that we're not."

In the five years since the founding of KEPYR, the organization has raised over $150,000 for UNICEF by hosting their online fundraiser and various live events. In the fall of 2019, KEPYR also produced its first live fundraiser, an all-star standup comedy benefit at The Comedy Store in Los Angeles. Patton Oswalt performing at the 2019 standup comedy benefit at The Comedy Store in Los Angeles. © photo courtesy of KEPYR

“When forced displacement causes so many millions of children to suffer so terribly, often effectively denying them their childhoods, it affects us deeply,” Moran notes. “Fred Rogers said: 'We are intimately related. May we never even pretend that we are not.' " Kindred Spirits is a way of translating that truth into positive action.

Ready to show your support for this year’s Kindred Spirits fundraiser on behalf of UNICEF’s refugee relief work? Click here to donate now!

Top photo: In the town of Castoria, Greece, circa 1950, a young refugee holds a folded UNICEF-supplied blanket in one hand and clutches his mother's skirt with the other. © UNICEF/UN041852/UNICEF@70