"You are moving in the direction of freedom," Nobel laureate Toni Morrison told Barnard's graduating class of 1979, "and the function of freedom is to free somebody else."

Learning to read and write frees the mind and opens doors, offering children and adolescents a ladder out of poverty and a path to a promising future. That's why UNICEF has 790 education staff members working across 144 countries to provide access to quality education for the world's most marginalized children. Globally, the youth literacy rate increased from 83 percent to 91 percent over two decades, while the number of illiterate youth declined from 170 million to 115 million. But challenges persist: literacy is lowest in the least developed countries and higher among males than females. According to the most recent figures available, young women account for 59 percent of the total illiterate youth population. Above, two girls read from a shared notebook at the UNICEF-supported Accelerated Learning Center in Sharak e Muhajireen village in Afghanistan's Darikundi province in May 2018. © UNICEF/UN0211158/Rezayee 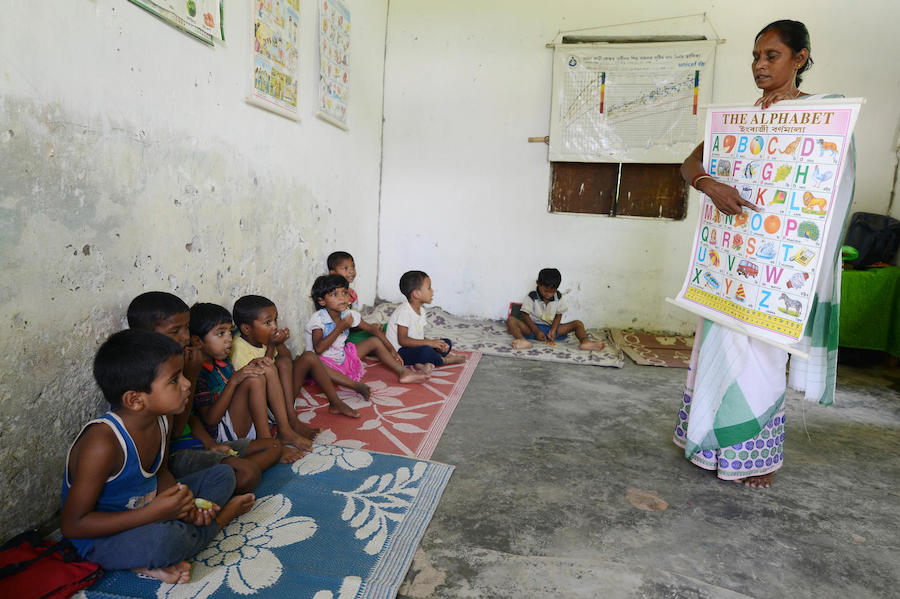 Children in pre-primary education are more than twice as likely to be on track in early literacy and numeracy skills than children missing out of early learning. Above, young children practice their ABC's at a UNICEF-supported school at Kharjan Tea Estate in Dibrughar, Assam, India in June 2019. © UNICEF/UN0326405/Boro 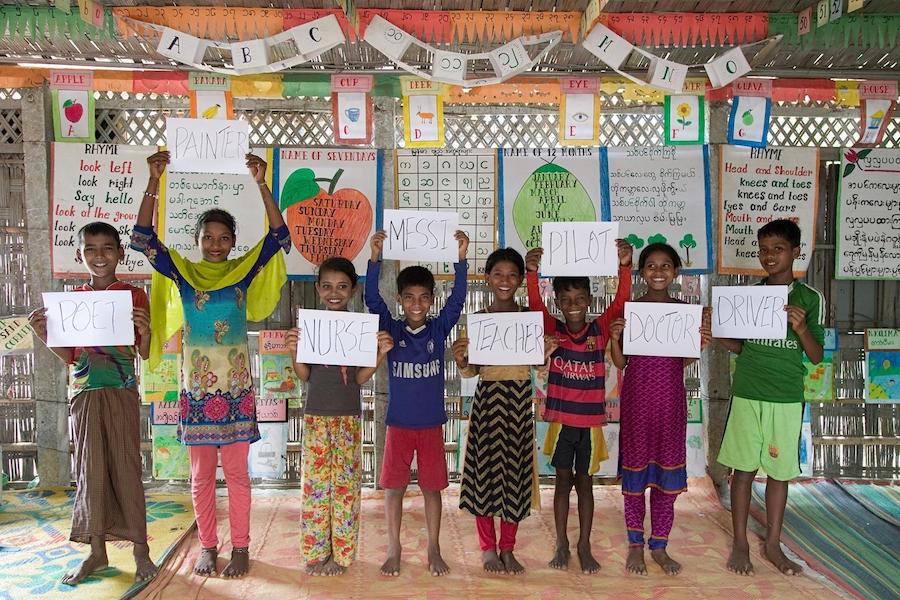 After two years in limbo, children and adolescents living in crowded Rohingya refugee camps in Cox's Bazar, Bangladesh, are eager to learn. UNICEF and partners have established 2,100 learning centers where 200,000 children, some of whom had never set foot in a school before, are acquiring the literacy skills that will help them achieve their dreams. Above, in June 2019, Rohingya refugee children who attend a UNICEF-supported learning center in the Teknaf refugee settlement hold signs sharing their hopes for the future. © UNICEF/UN0329395/Sujan 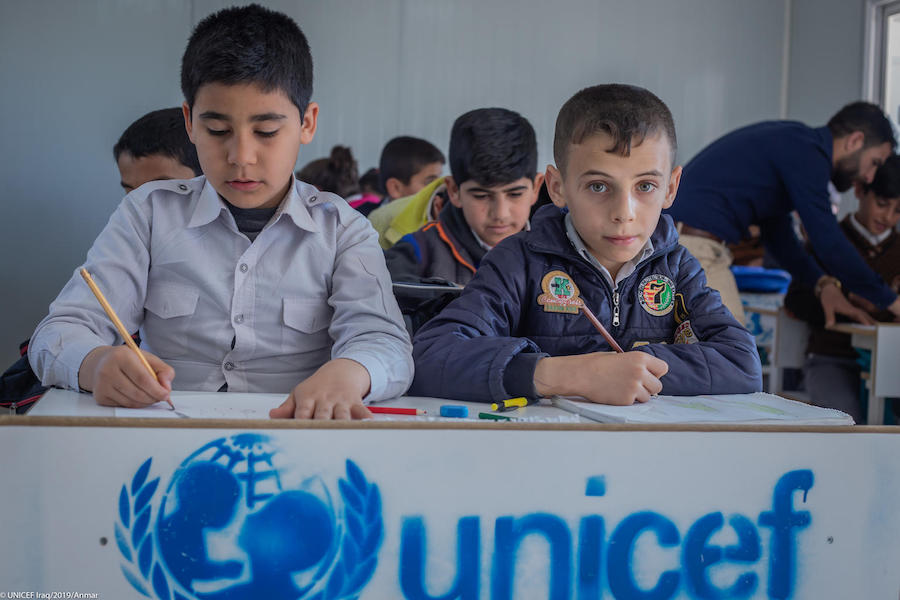 For children growing up in refugee settlements, school is more than a place to play and learn. It's also a safe haven in a complicated, uncertain world. Yasir, left, and Aris, both 11, attend the Keshti School in Erbil, Iraq, where Syrian refugees outnumber Iraqi students. Built by UNICEF with support from the U.S. Bureau of Population, Refugees and Migration, the school holds 500 students. "Here, there is no difference," says Yasir. "Syrians and Iraqis are all friends." © UNICEF/UN0284832/Anmar 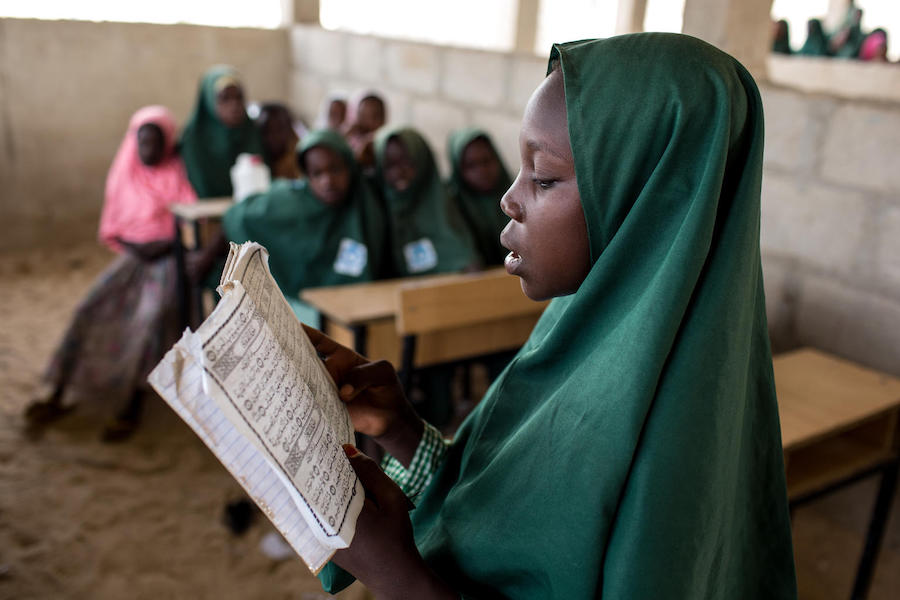 Zara, 11, reads to her class at Dala Shuwari Integrated Quranic School in Maiduguri, the capital of Borno state in northeast Nigeria, in April 2019. Zara's father was killed four years ago by Boko Haram, and her mother died in a building collapse. "After my parents died, I had to drop out of school for one year to look after the baby, my sister," says Zara. "The biggest challenge was that I didn't want the baby to cry. Then my grandmother took over, so I could go back to school. I want to be knowledgeable because I want to be a midwife, so that I can help pregnant women." © UNICEF/UN0322356/Kokic 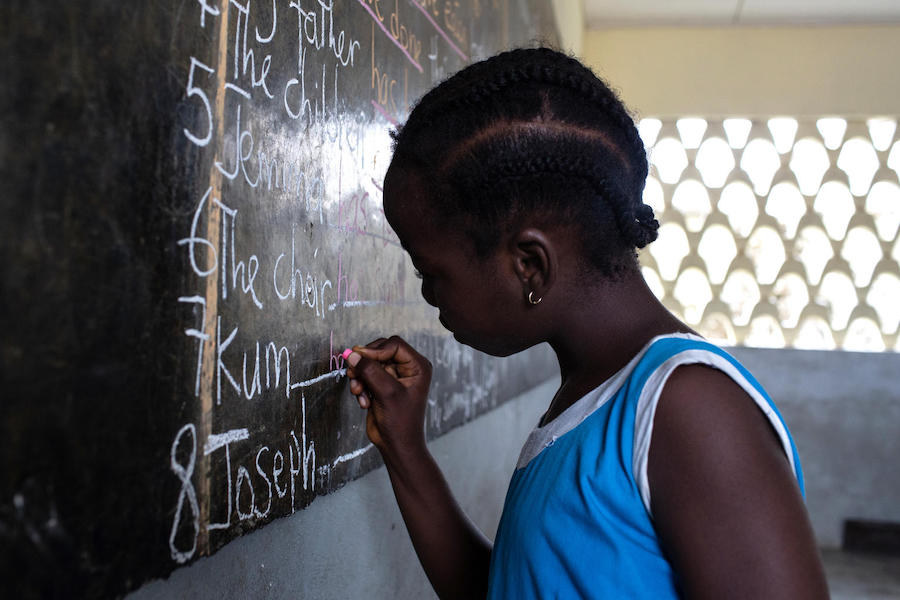 Nearly half of all children growing up in conflict areas —  27 million children in 24 countries — are missing out on an education. Children not enrolled in school face a much higher risk of recruitment by armed groups. Those who manage to stay in school brave the threat of violence to learn in overcrowded classrooms. Above, a student works on her spelling at the blackboard at GEPS Youpwe, a UNICEF-supported government primary school in Douala, Cameroon in May 2019. Nearly 200 of the school's students were displaced by violence that broke out in western Cameroon after protests calling for greater autonomy in the region. © UNICEF/UN0329165/Bindra Literacy helps children and adolescents connect with the wider world. At a UNICEF-supported shelter for unaccompanied migrant adolescents in Tijuana, Mexico, in February 2019, teenagers from Central America read letters of support they received from Mexican teenagers. © UNICEF/UN0284762/Bindra 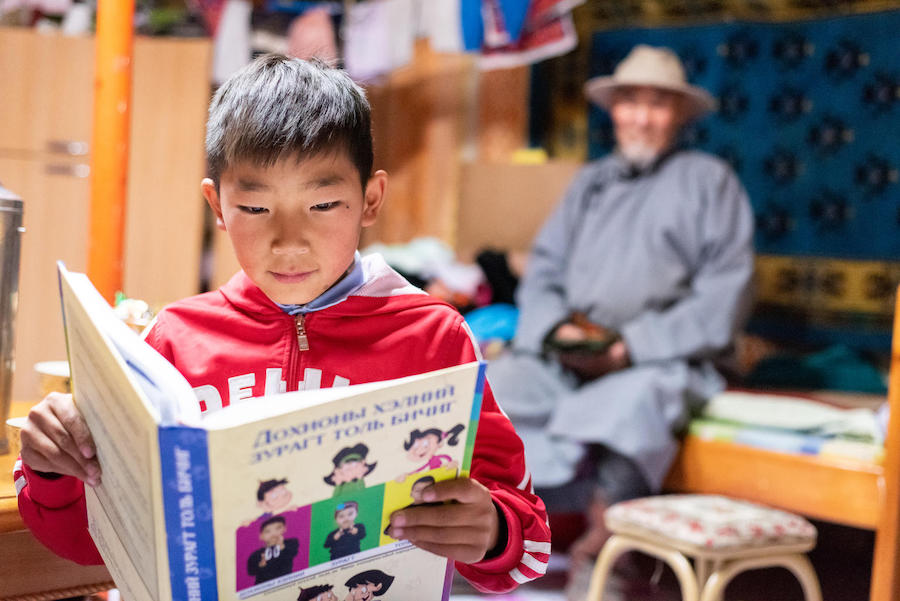 UNICEF works to provide access to education for children with disabilities, one of the most marginalized and excluded groups in society. Estimates suggest that there are at least 93 million children with disabilities in the world. They are less likely to attend school or play a visible role in society. A student who has special needs reads at home in Altai, Gobi-Altai province, Mongolia, in September 2018. UNICEF also provides special-education training for teachers, school materials and school furniture. © UNICEF/UN0255439/Pasquall 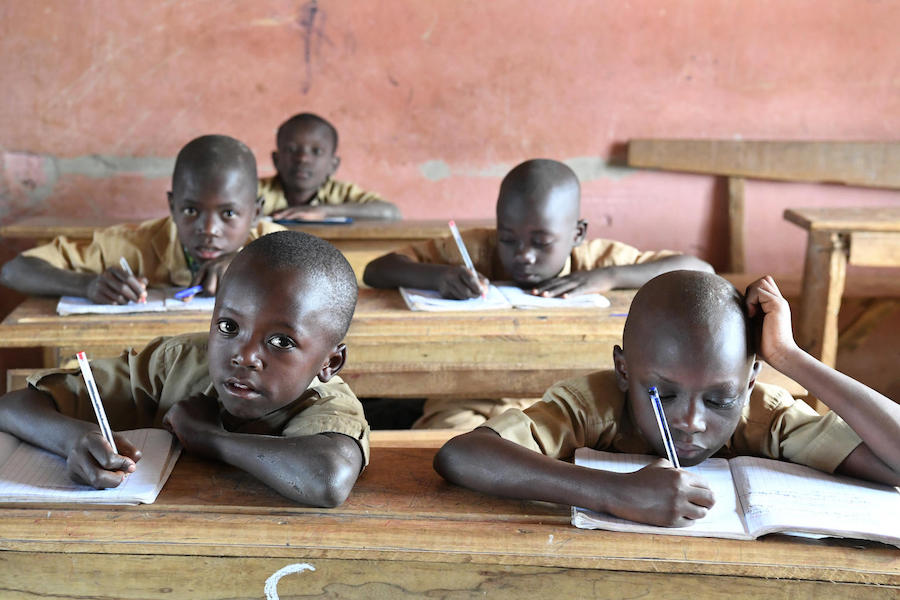 Boys practice their penmansahip at an Islamic school in Biankouma, a village in western Côte d'Ivoire, in January 2019.  Education is compulsory in Côte d'Ivoire for all children between the ages of 6 and 16, but more than 2 million children remain out of school because there are not enough classrooms. To help meet the demand, UNICEF formed an innovative partnership with Conceptos Plasticos, a Colombian company that transforms recycled plastic waste into bricks to build new schools. © UNICEF/UN0274299/Dejongh UNICEF spent $1.2 billion on education in 2018, including $53 million on teacher development and $29 million on system-strengthening activities, such as integrating non-formal education into formal curricula. There is more work to be done: globally, 262 million children and adolescents are still out of school.

Education is one of the smartest investments that can be made to support child survival, growth and development. Targeted investments in education also reduce poverty and empower girls. Give today to help the world's children live up to their full potential.

Top photo: A boy reads a book in the library of the cultural center in Mongo, in southern Chad. UNICEF is working to keep out-of-school children learning in West and Central Africa, where a surge in attacks and threats of violence against students, teachers and schools — against education itself — is jeopardizing the education and future of nearly 2 million children.  © UNICEF/UN0291781/Frank Dejongh