A new report using data from 35 countries shows that two-thirds of households with children have experienced income loss during the COVID-19 pandemic, leaving many struggling to afford food, housing, health care, education and other essentials.

A joint report — Impact of COVID-19 on the welfare of households with children — released today notes that households with three or more children were most likely to have lost income, with more than three-quarters experiencing a reduction in earnings. The findings are based on data collected in 35 countries.*

"The modest progress made in reducing child poverty in recent years risks being reversed in all parts of the world," said Sanjay Wijesekera, UNICEF Director of Programs. "Families have experienced loss at a staggering scale. While last year inflation reached its highest level in years, more than two-thirds of households with children brought in less money. Families cannot afford food or essential health care services. They cannot afford housing. It is a dire picture, and the poorest households are being pushed even deeper into poverty." 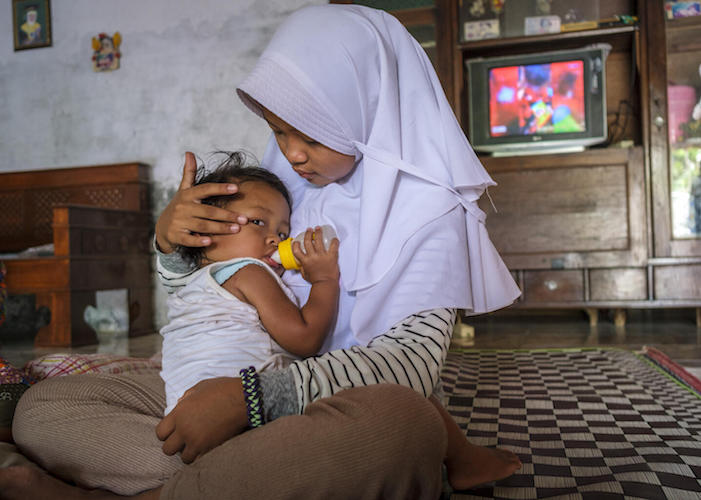 Ayra, 12, comforts her little sister Safia, 2, while caring for her at home in Sragen, Central Java Province, Indonesia. Arya’s father, who was the breadwinner of the family, died of COVID-19 at home in December 2020. Her mother Suwarsi, 40, started to work as a street food vendor, often earning only 30,000 Indonesian rupiah, or about $2 a day. Due to their situation, Arya sometimes has to skip school to take care of Safia. © UNICEF/UN0566453/Ose

Pandemic school closures have pushed at-risk children further behind; millions may never return to the classroom

Missing out on education deprives children of one of the basics they need to thrive. Pandemic-related learning losses have been steep — with the poorest and those furthest behind already bearing the highest price.

In the pandemic's uncertain earliest days, schools for more than 1.5 billion children shut their doors. In 40 percent of households, children were not engaged in any form of educational activities while their schools were closed. While restaurants and bars have reopened in the majority of countries worldwide, more than one-third of schoolchildren live in countries with full or partial closures still in place.

In low- and middle-income countries, learning losses due to school closures have left up to 70 percent of 10-year-olds unable to read or understand a simple text, up from 53 percent pre-pandemic. Millions of children may simply never return to school — some because they have lost so much ground that they are struggling to catch up, others because they are now working to support their families or have married early. In Moro, a suburb of Kinshasa, Democratic Republic of Congo, Sophie Bizeku, 33, and her family are beneficiaries of a UNICEF-supported cash assistance program to mitigate the socio-economic effects of the COVID-19 pandemic. "I used part of the money for school fees for the children and the rest for food," she said. The program was launched by UNICEF, USAID and other partners in October 2020. © UNICEF/UN0507433/Dejongh

"The disruptions to education and health care for children, coupled with catastrophic out-of-pocket health expenses which affect more than 1 billion people, could put the brakes on the development of human capital — the levels of education, health and well-being people need to become productive members of society," said Carolina Sánchez-Páramo, Global Director of Poverty and Equity for the World Bank.

"This could lock in increases in inequality for generations to come, making it less likely that children will do better than their parents or grandparents."

According to the UNICEF-World Bank report, while households with three or more children were the most likely to experience loss of income, they were also most likely to receive government assistance, with 25 percent accessing this support, as opposed to 10 percent of households without children. This helped to mitigate the impact of the crisis for families who received assistance.

To help children and families living in poverty, UNICEF and the World Bank urge a rapid expansion of social protection systems. Support including cash transfer programs and the universalization of child benefits are critical investments that can help lift families out of economic distress and help them prepare for future shocks. Since the start of the pandemic, more than 200 countries or territories have introduced thousands of social protection measures, and the World Bank has supported countries with approximately $12.5 billion to implement these measures, reaching nearly 1 billion people worldwide.

UNICEF is working with partners to ensure every child receives the education and support they need to reach their full potential. Your contribution can make a difference. Please donate.

Top photo: In October 2020, an agent holds a little boy while registering vulnerable families in Moro, a suburb of Kinshasa in the Democratic Republic of Congo. As part of a joint project led by UNICEF, USAID and partners to mitigate the socio-economic effects of the COVID-19 pandemic, eligible households in the Nsele area received cash assistance to help them afford food and other essentials.  © UNICEF/UN0513064/Dejongh