UNICEF NextGen Works to Save and Protect Young Migrants in Mexico

Kelly Wilson and UNICEF NextGen are young leaders committed to protecting the world’s most vulnerable kids. After a special mission to meet unaccompanied migrant children in Mexico, they got busy fundraising. And then the earthquakes hit. Now the young changemakers have their work cut out for them.

Kelly Wilson is the newest and youngest member of the UNICEF USA National Board and is Chair of the UNICEF Next Generation (NextGen) Los Angeles Steering Committee. She is Director of Corporate Responsibility at Warner Brothers.

Just last month, I traveled with UNICEF from Mexico City to Chiapas, the southern Mexico state bordering Guatemala. I was there to meet migrant children stuck in Mexican shelters. Most had fled from Guatemala, Nicaragua, Honduras and El Salvador. I wanted to know what their lives were like, what they were running from, what they dreamed of for their futures — and how I could help.

Since then, both Mexico City and Mexico’s Pacific coast have been hit by magnitude-7.1 and magnitude-8.1 earthquakes. There are 245 dead from collapsed buildings and bridges in five states and in the capital. As I write, more people are being pulled from the rubble. A rescue operation works to pull a young girl, who has been able to wiggle her fingers, from a collapsed school. 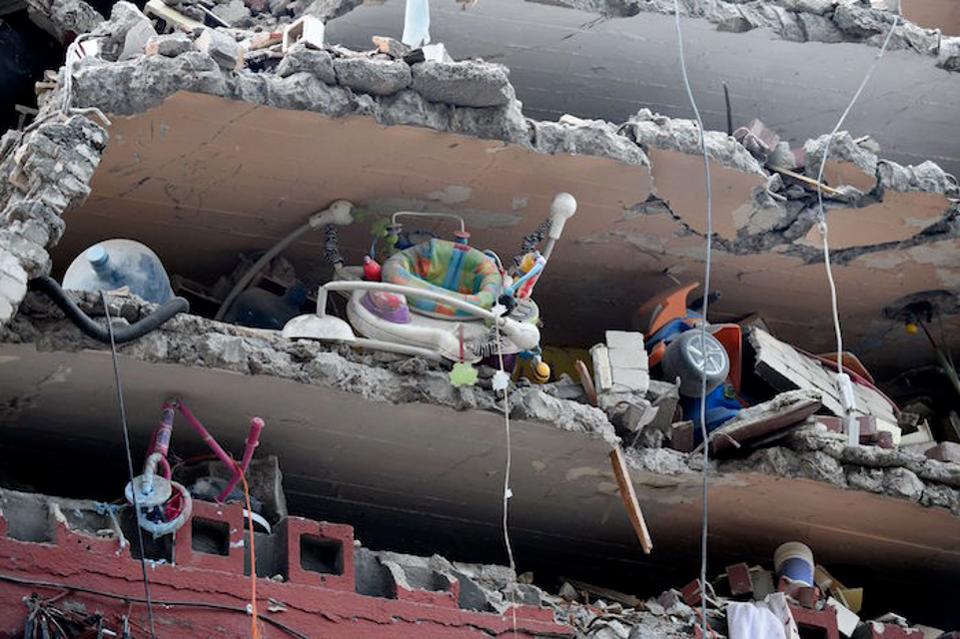 Toys and a baby walker are seen in a building flattened by the earthquake that shook Mexico City on September 18, as the search for survivors continues. © ALFREDO ESTRELLA/AFP/Getty Images

My first thought after learning of these devastating earthquakes was of the children I met with UNICEF. Even before having to grapple with a natural disaster, these kids were among the most challenged people in the world. They are growing up with staggering levels of violence and deprivation.

For the vast majority, leaving everything behind and starting over in a place where they are disadvantaged and often unwelcome is a heart-wrenching decision.

Migrants have many reasons for fleeing their homes: debilitating poverty, gang warfare, terror inspired by some of the world’s highest murder rates, persecution, a crippling lack of opportunity, the reunification of families divided by borders. For the vast majority, leaving everything behind and starting over in a place where they are disadvantaged and often unwelcome is a heart-wrenching decision. They know that en route they might be maimed, molested, enslaved by child traffickers or even killed. But they leave anyway, because they feel that they have no choice.

Imagine the child for whom the best option is to strike out alone, terrified, on a dangerous journey. Imagine the parent who sends a teen away because, despite myriad potentially deadly pitfalls, it’s safer than staying at home.

The crossing from Guatemala to Chiapas, Mexico. The official border is in view, yet there’s a constant flow of families without papers being led across the border by coyotes.  © Jessica Dineen

Many of the children we met were teens, intercepted on their journey by the Mexican government and now living in 'closed-door shelters' where they are detained.

Many of the children we met were teens, intercepted on their journey by the Mexican government and now living in “closed-door shelters,” where they are detained. At one shelter, we played soccer and did breakdancing routines with some of the teens. We played a board game provided by UNICEF that is a version of Snakes & Ladders with real-life problems and solutions experienced by kids on the run. UNICEF routinely visits these shelters to ensure that the children are given learning materials, counseling and proper healthcare and that they are aware of their right to apply for asylum. 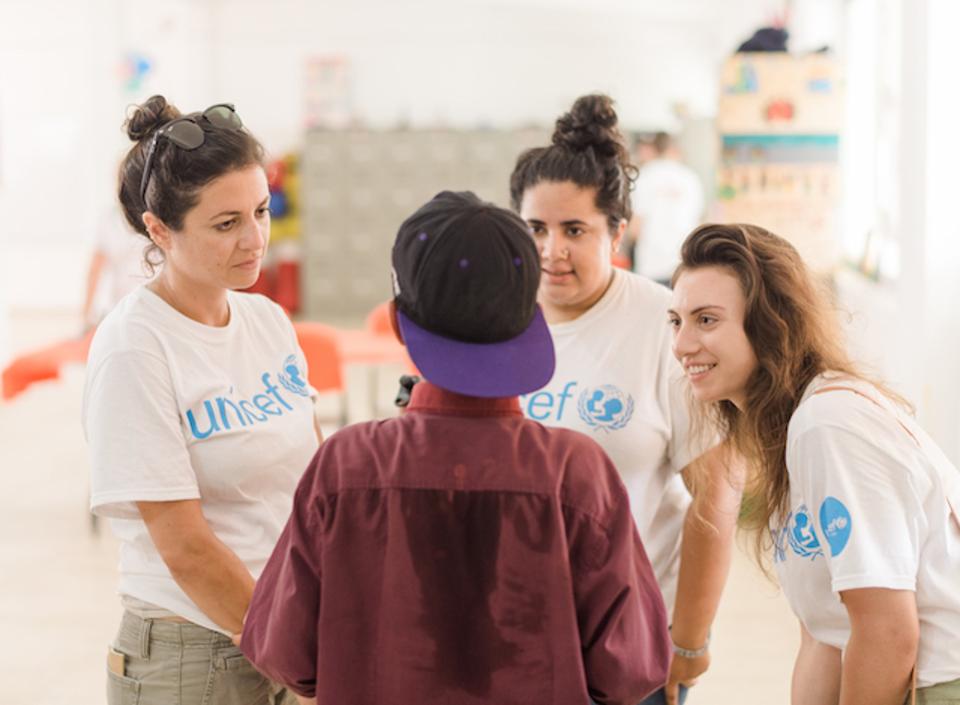 We met only one child who said that if he were sent back, he would not try again to escape his situation in his country of origin. “I’m tired,” he said dejectedly. All of the others said that if they were sent back, they would try again to escape. And again. We asked the boys who were quietly playing the board game, "Where are you headed?"  “Houston.” “Tijuana.” “Tennessee.” “New Jersey.” “Cancun.” “Florida.”

We met only one child who said that if he were sent back, he would not try again to escape his situation in his country of origin.

The reality is that 98% of them will be sent back to their countries of origin and to the poverty, violence and persecution they likely faced there. Some of the children caught at the border are kept in detention for weeks, or months. Unaccompanied children may face years of uncertainty as their cases go before immigration courts.

One of the girls scooped up by the government as she fled with no guardian was just 9 years old. Beds at a shelter in Tapachula, Mexico. © UNICEF USA/Rebecca Yale

I made this journey to Mexico with UNICEF NextGen, a group of leaders, entrepreneurs and innovators in our 20’s and 30’s who are committed to inspiring our generation to take action and support UNICEF’s work. Ask any member of NextGen about UNICEF, and you will hear an impassioned plea for saving and protecting children all across the world, with special attention to those that are the most vulnerable and hardest to reach. What better way for the fortunate to give back than to save the lives of the next generation, so that they can build the future?

For UNICEF NextGen, there's no 'clicktivism.'

For UNICEF NextGen, there’s no “clicktivism.” We conduct in-depth studies of issues affecting children, and then we choose projects to support via fundraising and consulting. We have regular opportunities to go “into the field” and meet the people who would benefit from our work. Our commitment to funding a proposal to help migrant children follows a project focused on Syrian refugee women. Arriving in Mexico City, NextGen members had hailed from all across the United States. One had come directly from her own wedding. By 4:45 the next morning, we were headed for the southern border. The children in the shelters are living with intense stress and danger — and their journeys are not over. Sometimes the best way to comfort them is to play with them. © UNICEF USA/Rebecca Yale

It’s hard to prepare for what we saw in the days that followed. How do you prepare for meeting a mother who, after escaping the terror of gang violence in Guatemala and crossing with her three children aged 9, 13 and 15, lost her 15-year-old son a few days before we arrived? Our UNICEF Mexico guide said that he was likely kidnapped to be used for work or sex or even to harvest his organs.

It's hard to know how to respond when a young mother, asked what message she would have for Americans wondering about her family's plight, says, 'Tell them we are human.'

It’s hard to know how to respond when a young mother, asked what message she would have for Americans wondering about her family's plight, says, “Tell them we are human.” 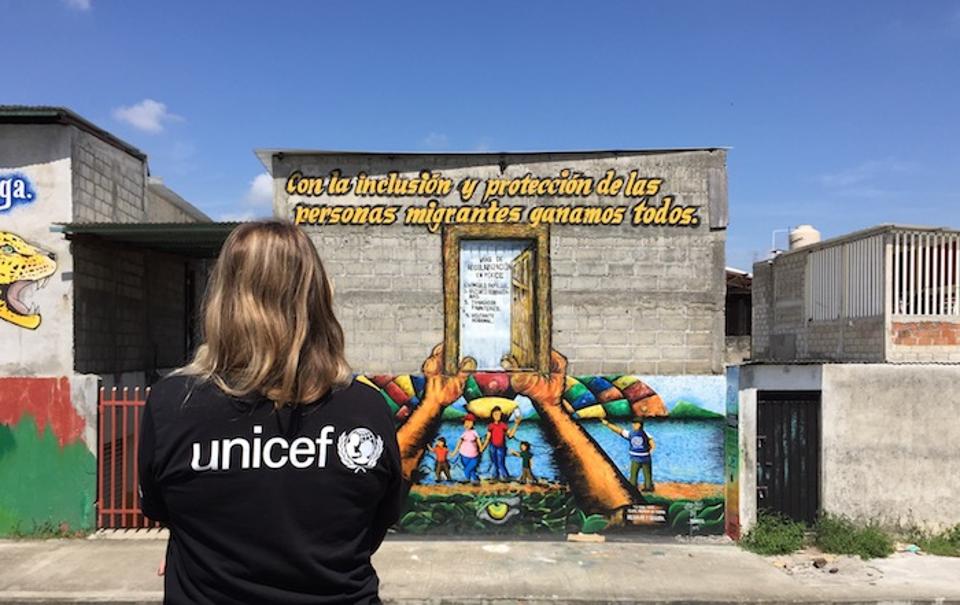 UNICEF, UNHCR and other humanitarian agencies have many ways of telling migrants their rights upon arrival — including this mural near the Mexican-Guatemalan border in Chiapas. Here, the author reads the mural’s message: “With the inclusion and protection of migrants, we all win.” In the lower lefthand corner is the hashtag #YoteDoymeMano — I give my hand.” © UNICEF USA/Rebecca Yale

We traveled with several UNICEF partners and UNICEF Mexico staff, including Country Representative Cristian Skoog. After the earthquakes, he made this statement to the press gathered amid the destruction: "We need your solidarity and the support of all Mexicans in this very difficult time. Your support, your solidarity, your help. We count on you."

We support UNICEF because UNICEF is there for these kids — literally.

UNICEF NextGen has a ready response: We can be counted on. We support UNICEF because UNICEF is there for these kids — literally. UNICEF works in 190 countries and territories. UNICEF is in Mexico, helping the migrant children and others who are the most vulnerable, especially when disaster hits.

Meanwhile, UNICEF NextGen members are back in the United States doing what we do best: working our networks, “pounding the pavement” to raise the funds UNICEF needs to improve, protect and save these children’s lives. We will help UNICEF work toward a more just process for migrant children — including once they enter the U.S., should they be lucky enough to cross the border into our land of relative fortune and freedom. Young people need protection every step of the way — at home, along the journey and at their destinations. 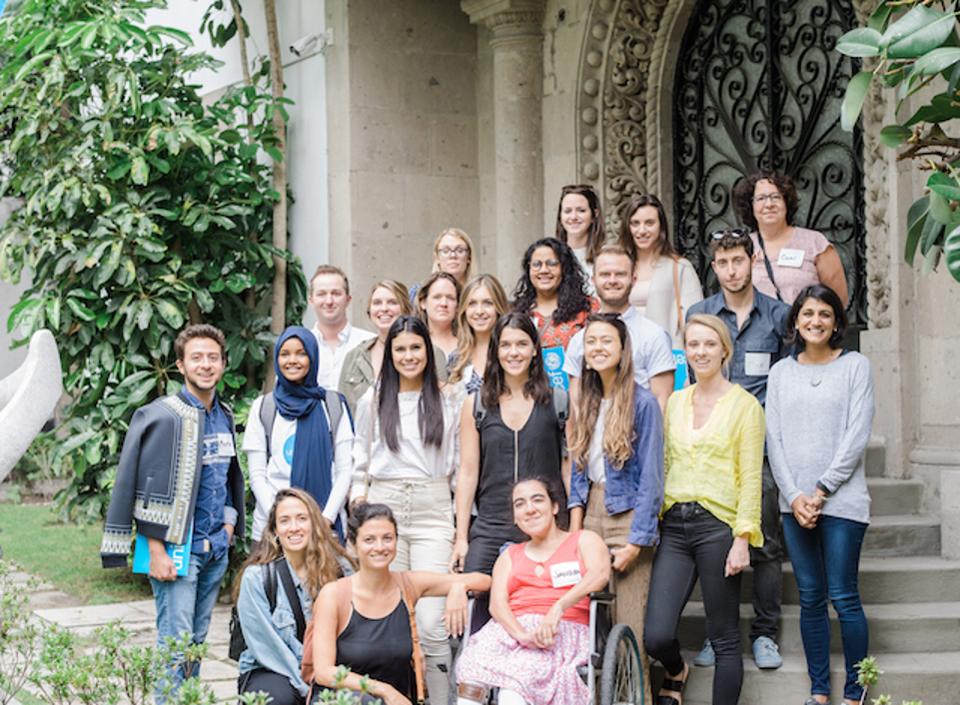 Members of UNICEF NextGen and staff in Mexico City. Kelly Wilson is in the third row, second from left. © UNICEF USA/Rebecca Yale

As Mexico struggles with the aftermath of two earthquakes, I believe that I, as a member of UNICEF NextGen, have a responsibility to keep my eye trained to the needs of the children there. We never lose sight of the fact that a child is a child, no matter the turmoil. In every situation, all children deserve a chance to grow up in a safe place with people who love and encourage them. All children and young people deserve a quality education. All children deserve to live with hope. All children deserve the opportunity to build their futures.

Learn more about UNICEF Next Generation.