UNICEF Health Workers Are Fighting to Eliminate Ebola in the DRC

For Jean-Pierre Masuku, the fight against the Ebola epidemic currently raging in North Kivu, in eastern Democratic Republic of Congo (DRC), is not new. He witnessed an earlier outbreak of the disease in Equateur Province, 1,550 miles west of the newly affected areas. “But whatever it is, you do not get used to fighting a highly dangerous, contagious and deadly disease like Ebola,” he says.

Masuku is a UNICEF staffer, active in community communication. He went to Beni with the first UNICEF response team, just hours after the DRC Health Minister announced the new Ebola outbreak in August 2018. “It was not easy, the first days. The scale of the crisis was not yet clear, and the material, human and financial resources for the response were lacking. But UNICEF quickly mobilized teams and the necessary means to be able to put a response in place to meet the needs.” Within 10 days of the announcement, more than 20 Ebola cases had been confirmed in the two epicenters of the epidemic: Beni and the Mangina health area about 19 miles east of Beni.

In the fight against the disease, UNICEF has mobilized communication specialists to raise awareness among the local population. “As part of my communication activities, I visit markets, among other places. With the support of local civil organizations, I remind people that good hygiene and frequent hand washing are essential to protect oneself against the disease.” 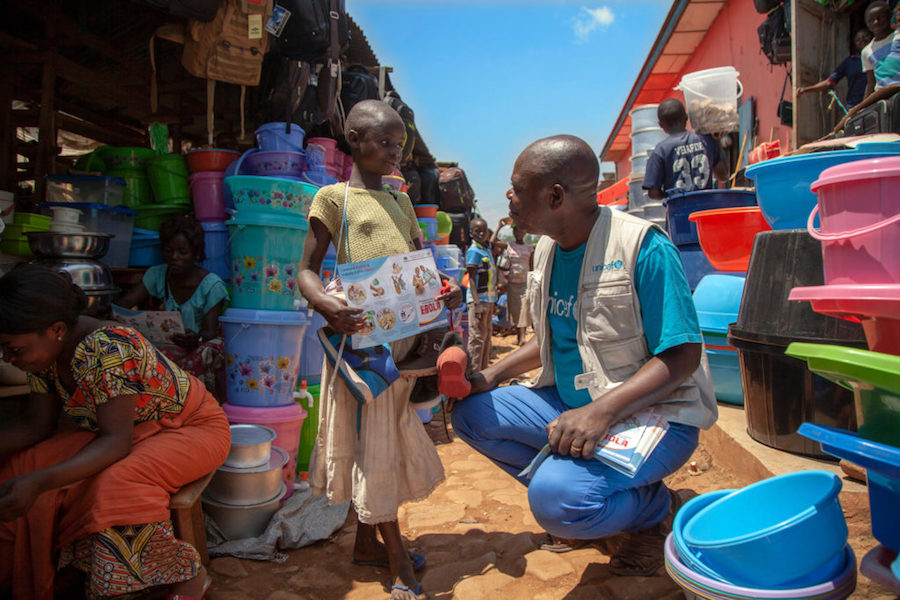 In the central market of Beni, Masuku (above) imperturbably repeats messages of prevention over his megaphone. At his side, members of the local civil organzation distribute prevention leaflets. “I inform people in the market that the Government has put in place a free number that they can call to report suspected Ebola cases in their community," he explains. "They have to be treated quickly by competent health services to avoid any contamination around them.” While Jean Pierre communicates the toll-free number, passers-by around him record it on their cell phones. The population is clearly concerned about the epidemic. Everyone wants to protect themselves, their family and community from the deadly disease.

Masuku and his colleagues spare no effort to build a coalition of informed people to help prevent the spread of the disease. “In the communication committee that UNICEF runs with the Government, we identify all the partners who can help us sensitize the local population. All ideas are welcome. They are discussed at our daily meeting.”

The work is definitely not over. In Mangina, Ebola’s other epicenter, Masuku’s colleagues develop similar outreach activities. With partners, UNICEF has trained dozens of local health workers. They go door-to-door to educate each family in the affected communities. Local radio stations and journalists broadcast prevention messages to their listeners and readers. 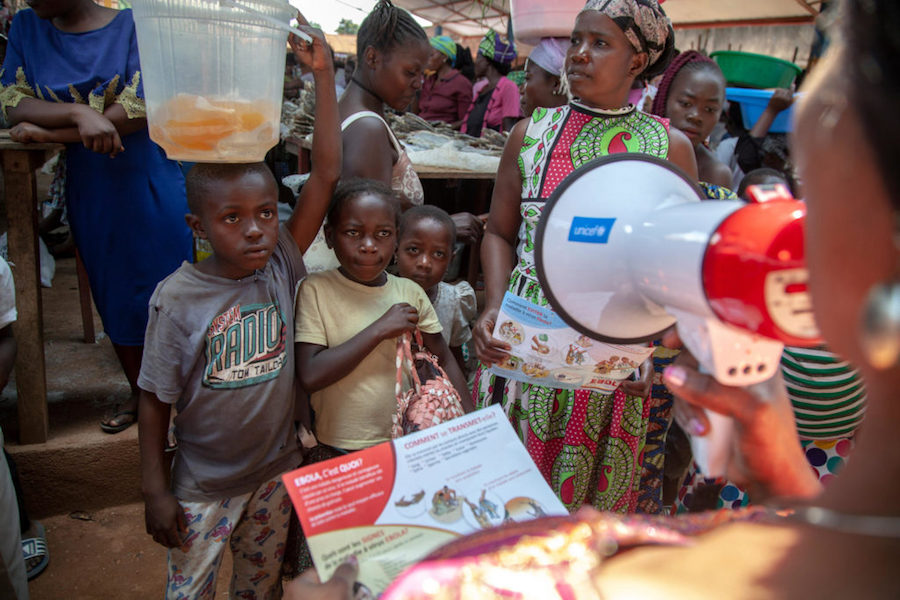 Barely a week after the outbreak was announced, UNICEF and partners had already reached more than 30,000 people with their prevention work. “Each of them is a partner in the fight against the Ebola virus. They can pass prevention messages to their families and neighbors,” says Masuku. “The work is definitely not over. We still have a lot of people to sensitize in Beni and Mangina,” he concludes.

A big smile appears on Masuku’s face when I ask him how it feels to fight the Ebola virus in North Kivu: “I’m proud that I can help eliminate the disease from my country. And I am pleased to be able to do this within UNICEF, as our organization plays a crucial role in the fight against the Ebola virus.”

Since the latest Ebola outbreak began, more than 740 people — one-third of them children — have been infected with the Ebola virus, and more than 460 have died. UNICEF is working alongside the DRC Government and partners to scale up its response to assist victims, control the spread of the disease and end the deadly outbreak. To date, UNICEF and partners have:

Please support UNICEF's work to eliminate Ebola in the Democratic Republic of Congo.

UNICEF and partners are working tirelessly in the Democratic Republic of Congo, Syria, Yemen, South Sudan, Bangladesh and around the world to save and protect children. With a presence in 190 countries and territories, UNICEF has helped save more children's lives than any other humanitarian organization in the world.

Yves Willemot is Chief of Communications at UNICEF, the Democratic Republic of Congo.