One Year After the Earthquakes, a Look at UNICEF's Impact in Mexico

In the immediate aftermath, UNICEF focused on providing food and medicine and getting children safely back to school as quickly as possible. On the anniversary of the second of two devastating quakes, an update on the state of the recovery.

The recovery efforts have made a lot of progress over the last 12 months, according to a new UNICEF report. But there's a lot that still needs to be done, and efforts must continue to strengthen social programs and emergency response mechanisms to ensure that basic needs can be met and vulnerable children are better protected next time disaster strikes.

UNICEF's assistance efforts in Mexico over the past year include:

For many communities in Mexico's earthquake-affected areas, serious challenges remain. In Chiapas and Oaxaca, more than 3,400 schools are still closed. Homes have running water again, but water systems have not yet returned to full capacity. Additional Child-Friendly Spaces are needed — safe places where children and adolescents can come to learn, socialize, relax, play and participate in community activities.

Still, the impact of last year’s quakes could have been much, much worse, officials say. “As a country regularly exposed to multiple natural phenomena, Mexico has been working to strengthen its resilience to emergencies, has built up its public safety culture and has achieved considerable progress since the 1985 earthquakes, as evident in 2017: fewer dead and injured and less damage to certain types of infrastructure," notes UNICEF Country Representative Christian Skoog. The 1985 Mexico City earthquake, which also happened to strike on Sept. 19 of that year, killed 10,000 people.

boy in Mexico in classroom.png 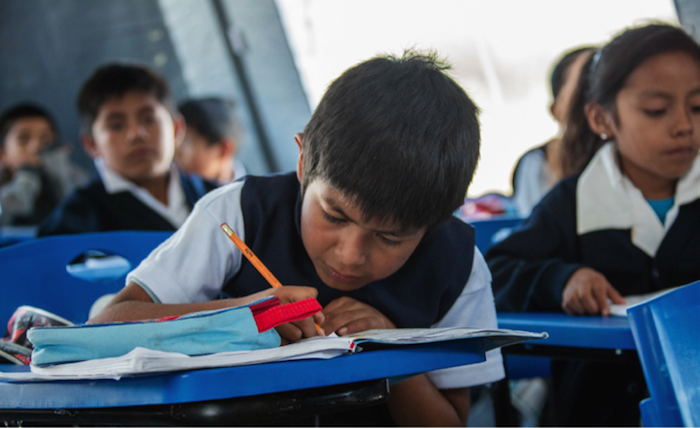 After two earthquakes struck Mexico in Sept. 2017, UNICEF helped set up temporary learning spaces for children whose schools had been damaged or destroyed. Creating a safe environment that allows kids to get back to their regular routine after a natural disaster is a key part of helping children recover from a traumatic event, and critical to their long-term well-being. ©UNICEF Mexico/Luis Kelly

“We now have the opportunity to take two important steps," Skoog continued. "We must ensure continuity of education in the aftermath of any emergency through safer school buildings. And we must ensure that response protocols and mechanisms are developed with a focus on children and adolescents in particular, so that the effect of this type of situation on them is as mild as possible, and their recovery as fast as can be.”

UNICEF is ready to share its decades of experience in dealing with emergencies globally to support a strengthening of information systems so that they can ensure an even faster and more solid response to future emergencies, Skoog added.

UNICEF is there before, during and after emergencies. Please support these crucial relief efforts.