More Humanitarian Aid Needed to Fend off Famine in Somalia

At least 730 children in Somalia have already died from severe acute malnutrition. UNICEF calls for more support as deteriorating conditions lead areas of Somalia's Bay region to the brink of famine.

Famine could hit parts of Somalia as soon as next month, according to new projections by a multi-agency working group.

Somalia, along with parts of Ethiopia, Kenya and other countries in the Horn of Africa, has been suffering the combined effects of severe drought — the region's worst climate-induced emergency in 40 years — sharply increasing food prices and conflict. The war in Ukraine has been particularly disastrous for Somalia, which had relied on Russia and Ukraine for at least 90 percent of its wheat.

The rising needs of affected children and families are outpacing the response, according to a summary report shared by IPC.

The warning "underlines the scale of the crisis Somalia is facing and the urgent need to quickly scale up support," UNICEF Somalia Representative Wafaa Saeed said.

According to new projections, children and their families in Baidoa and Buurhakaba, parts of Somalia's Bay Region, will be facing famine between October and December this year if humanitarian assistance is not significantly increased.

In Somalia, 'unprecedented' numbers of children are suffering from severe acute malnutrition

According to UNICEF, 1.5 million children in Somalia — nearly half of the country's under-5 population — are likely to have acute malnutrition.

"Of these, 385,000 will need treatment for severe acute malnutrition," Saeed said. "These are unprecedented numbers."

Children with severe acute malnutrition are up to 11 times more likely to die from disease than well-nourished children.

"Water and sanitation are just as important as food for children and families facing famine and food insecurity," Saeed noted. There are 4.5 million people in Somalia in need of emergency water supply, and the figure is expected to rise as the drought worsens. In some areas, water prices have climbed by 55 percent or more since January 2022.

"No matter how much food a malnourished child eats, he or she will not get better if the water they are drinking is not safe," Saeed said. 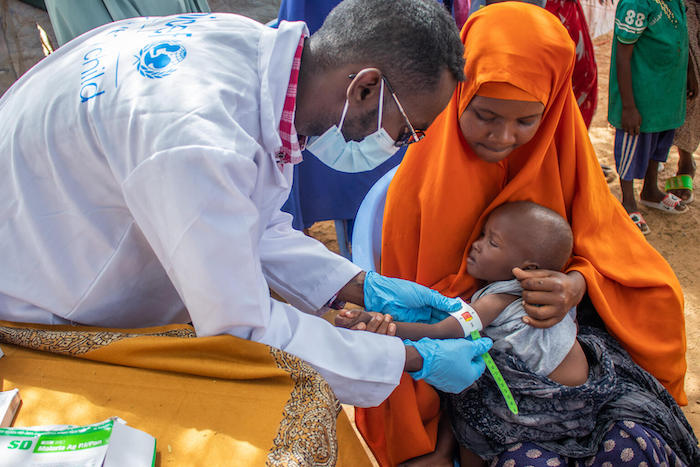 A child is screened for malnutrition by a member of a UNICEF mobile health and nutrition team at the Waffi IDP camp in Mogadishu, Somalia. © UNICEF/UN0663316/Sewunet

Could the situation have been prevented if we had acted sooner?

"This is Somalia’s third drought in a decade," Saeed said. "The first drought, in 2011, killed an estimated 260,000 people, many of them children. The worst effects of the second, in 2017, were mitigated because early warning systems kicked in, donors channeled aid quickly, government institutions were more solid, and there were more operational organizations on the ground. The response to our appeal this time was slower."

By July, less than a third of the UN's response plan, and only 65 percent of UNICEF's drought appeal, had been funded, Saeed said.

UNICEF's impact so far includes treating 223,000 children for severe acute malnutrition — 58 percent of the target number for 2022 — and reaching 1 million people with sustainable water supply, or 30 percent of the 2022 target. Another 1.3 million people — 25 percent of UNICEF's target — have been reached with temporary water supply, and 1.2 million children have been vaccinated against measles in response to a worsening measles outbreak.

Ongoing efforts to prevent disease outbreaks include providing water and sanitation to displaced families and stepping up vaccinations against measles and cholera.

Support UNICEF's efforts to reach children and families in Somalia with the humanitarian aid they urgently need. Donate today. 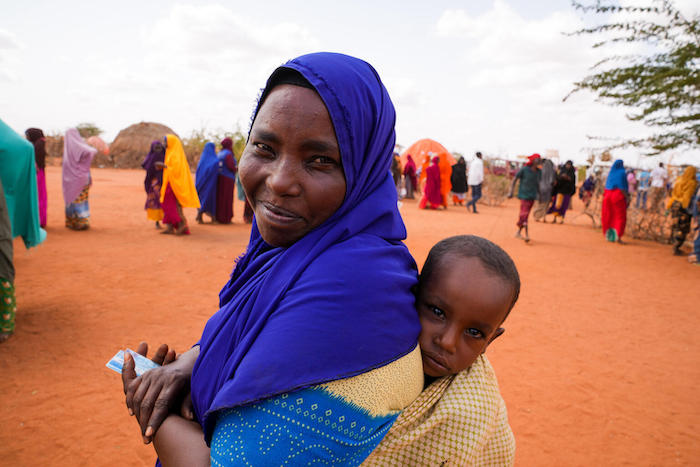 Ambiya, 38,of Elbur, is staying at the UNICEF-supported Kaharey camp in Dollow, Somalia, with her 2-year-old son Mohamad. The family lost all their livestock because of the drought. “I am happy I am receiving help in this camp,” Ambiyo says. “At least we have drinking water in this camp." © UNICEF/UN0644296/Fazel

Top photo: Mothers and children seek support including treatment for malnutrition from a UNICEF mobile health and nutrition team at the Waafi IDP (Internally Displaced Persons) camp in Mogadishu, Somalia, on June 13, 2022. © UNICEF/UN0663307/Sewunet