Making the World a Better Place

Built on small acts of kindness and moments of bravery, these books teach children to look for the goodness in people.

Children are, by nature, optimists. They're hardwired to help. And being small, they are quick to pick up on injustice. Put these traits together and you have the makings of a natural-born humanitarian.

Reading books together is a comforting, helpful way to encourage young children to think about empathy and social responsibility. Stories about children growing up in challenging circumstances widen a child's worldview; real-life accounts of people living exemplary lives inspire action.

The books below teach children to look for the goodness in people and offer concrete ways that even the youngest among us can help make the world a better place. Today, on International Children's Book Day, take time to read a book with the young humanitarian in your life.

Small acts of kindness and moments of bravery

MOST PEOPLE written by Michael Leannah, illustrated by Jennifer E. Morris (Tilbury House Publishers: 2017; ages 3 to 7). This tender book reminds young readers that, while there are some bad people out there, there are many more good people. Most people love to smile and laugh. Most people love the sunshine. Most people want to help others, and life presents many ways we can show compassion and concern for those around us.

COME WITH ME written by Holly M. McGhee, illustrated by Pascal LeMaître (Putnam: 2017; ages 5 to 8). "All over the world, the news told and told and retold of anger and hatred — People against people. And the little girl was frightened by everything she heard and saw and felt." Overwhelmed by news reports of hatred and fear, a little girl asks her papa what she can do to be a force for good in the world. "Come with me," he says, and they walk to the subway, tipping their hats to the people they meet along the way. In this lovely story, the girl discovers that there is always room for friendliness and courage. MY BEAUTIFUL BIRDS written and illustrated by Suzanne Del Rizzo (Pajama Press: 2017; ages 6 and up). The devastating six-year Syrian civil war has affected 80 percent of the country's children and forced more than 12 million Syrians out of their homes. Inspired by an article about a Syrian boy living in Jordan's Zaatari refugee camp, Suzanne Del Rizzo's moving story is a gentle way to introduce the refugee crisis to children. The action follows Sami, a Syrian boy, as he and his family flee their bombed-out neighborhood, leaving everything behind, including Sami's beloved birds. After they take up residence in a tent city, Sami discovers that even in the midst of loss, there are moments of hope.

Stories of hope, strength and determination

ONE HEN written by Katie Smith Milway, illustrated by Eugenie Fernandes (Kids Can Press: 2008; ages 8 to 12). When Kojo, a young boy growing up in a poor village in Ghana, gets a few coins from his mother, he decides to buy a hen. Before long, Kojo has parlayed the hen into a thriving farm and opportunities for many people in his community. Inspired by the life of Kwabena Darko, who as a boy started a tiny poultry farm which later became the largest in Ghana, "One Hen" is a simple way of introducing kids to the concepts of microfinance and social entrepreneurship.

MALALA'S MAGIC PENCIL by Malala Yousafzai, illustrated by Kerascoët. (Little, Brown: 2017; ages 4 to 8). As a child in Pakistan, Yousafzai, the youngest winner of the Nobel Peace Prize, dreamed of having a magic pencil that could solve any problem. But as she grew, she realized that she herself had the power to create change through her words and ideas. The story of her strength and determination in the face of "powerful and dangerous men" (the unnamed Taliban, described in more detail in an afterword) who forbid girls from going to school (and who tried to kill her for daring to want an education) is beautifully told here. 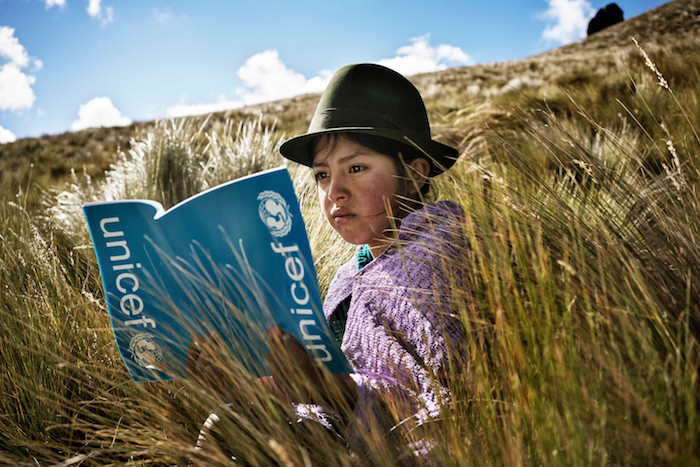 This little girl learned to read at a UNICEF-supported school in Zumbahua, Ecuador. © UNICEF/UN043279/Palombi

SILVER PACKAGES written by Cynthia Rylant, illustrated by Chris K. Soentpiet (Scholastic: 1987; ages 8 to 10). This story of giving back is based on the real-life Santa Train that has traveled through Appalachia every December since 1943, distributing candy and toys to children growing up in the poor coal mining towns along its route. The story traces the train's origins to a rich businessman, injured in an automobile accident and nursed back to health by locals. Every year, he shows his gratitude by returning in a special train to throw silver-wrapped parcels to the children lining the railway tracks. A young boy, Frankie, waits eagerly every year, hoping to catch a toy doctor's kit. Though he never gets one, he receives other useful gifts. "Just when the cold wind was cutting sharp as a blade into his throat, the man had brought a scarf. And just when Frankie's ears were numb with red cold, the man had brought a hat." After Frankie grows up and moves away from his hometown, he returns to share gifts of his own.

A burst of inspiration before bedtime

THE ARABOOLIES OF LIBERTY STREET written by Sam Swope, illustrated by Barry Root (Macmillan: 1989; ages 4 to 8). This classic story introduces young children to tyrannical General Pinch and his mean wife, Mrs. Pinch, who live on a street of identical all-white houses. The General keeps strict order by threatening his miserable neighbors with an army invasion if they step out of line. When the fun-loving, free-wheeling Araboolies move in next door, the Pinches are apoplectic. How the children of the neighborhood work together to protect the Araboolies from the Pinches will delight young readers. The book raises issues of what makes a good society and why freedom, tolerance and individuality are always worth fighting for. A father and son make time to read together every day in Belize. © UNICEF/UN035785/LeMoyne

Top photo: The best books open worlds for children. A girl reads during a class in School No. 6 in Yasinovataya, Ukraine in October 2016. © UNICEF/UN050366/Filippov