Looking Back at Haiti's Catastrophic Earthquake

A decade later, UNICEF is still on the ground, helping determined Haitians recover and rebuild their lives after an unparalleled disaster.

I know her face because I have revisited the memory so often. I picture her with a wide smile, her eyes are closed as she tilts her right cheekbone towards the sun, drinking in its nourishment. She is wearing a woven white shirt, soft and rumpled, tied at the waist.

She came into my life while I was in Port au Prince, Haiti in February 2010, a few weeks after the earthquake that killed more than 220,000 people and displaced an estimated 1.6 million. Within days, UNICEF staff and supplies were on the ground, working with partners to help Haiti's families survive an unprecedented emergency.

Babies keep on being born, entering the world all fresh and new, eager to begin life — unaware that they are arriving at the height of a crisis.

We had spent the morning at the Stade Sylvio Cator soccer stadium, where thousands had sought refuge. Inside the arena, UNICEF had established "baby-friendly" spaces for pregnant and lactating women to rest and receive medical attention. Even in the midst of earthquakes, war and tsunamis, babies keep on being born, entering the world all fresh and new, eager to begin life — unaware that they are arriving at the height of a crisis. They force us to keep up with them. We have no choice but to try, even when it feels impossible. 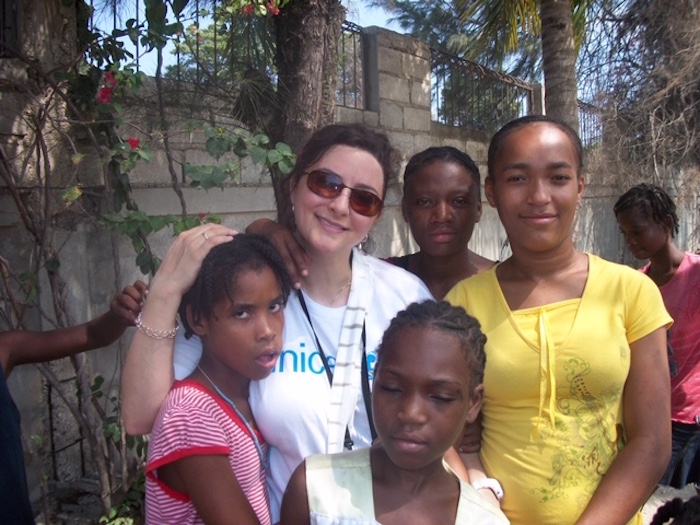 Lisa Szarkowsi travelled to Haiti immediately after the deadly earthquake in 2010 as part of the UNICEF USA emergency response team. © UNICEF

En route back to the United Nations base, we stopped in a neighborhood near the Cathedral of Our Lady of the Assumption to pick up another colleague. Ordinarily, a few quick texts and we'd have located him and been on our way. But post-earthquake cell service was unreliable and with roads closed and landmarks destroyed, even the veteran Haitian UNICEF staff drivers had trouble negotiating the terrain.

Nothing was ordinary or quick. Imagine chunks of crumbled building at least three feet deep in every street, like a dry flood had just rushed through, depositing debris instead of water. If you came upon a street without rubble, every inch was covered in makeshift tents. UNICEF was fortunate to have secured functioning vehicles and fuel, but the few roads that had been cleared of debris were bumper-to-bumper with trucks carrying urgently needed supplies. There was a curfew in place, but the roads were immune to normal traffic cycles and remained firmly jammed around the clock.

A young man refused to leave the body of his fiancée, crushed under a concrete slab. "She mattered," he said through sobs.

It was early afternoon and the heat was intense. We stood outside, leaning against our truck, surrounded by ruined buildings. I try not to look too closely at rubble because, inevitably, you begin to discern things like plastic cups, toys, shoes, school papers. It feels disrespectful, like a violation of privacy, to examine personal effects. It's painful when you notice a little girl's hair ribbon entangled with metal and concrete. Maybe she survived? Maybe she didn't.

A young man approached, pointing to our UNICEF shirts to signal he needed help. Moving with urgency through the field of rubble, he guided us to a particular spot and motioned frantically to a huge concrete slab beside us. He began to cry, explaining that his fiancée had been killed here and he had not left her side, determined to remove her and give her a proper burial. He and I locked eyes and he pointed towards the ground. This time, I saw her hand, extended from beneath the slab. He pleaded with us to help him move the concrete.

He looked like he was in his early 20's. They were to be married soon and he loved her with all his heart. He described her with such love that I could picture her smiling in the sun. "She mattered," he said through sobs. "She mattered." Even with four or five of us working together, the structure that collapsed on her would be impossible to budge. We had to tell him this, and get back to our route.

Squished back into the UNICEF truck, no one spoke. It wasn't just that we couldn't help this man complete a basic act of human decency. It was the profound love and anguish we had witnessed. He had stayed with her night and day, surrounded by destruction and death for weeks. He was traumatized, dehydrated and exhausted. All available resources were being focused on the living. But leaving her was unthinkable. Since meeting him, I can't help measuring people by his example. Would I stay with them? Would they stay with me?

The people of Haiti do not want to be thought of as victims.... They are surviving and lifting each other up, and trying to make their country whole.

The people of Haiti do not want to be thought of as victims. They are not passive recipients of outside help. They are surviving and lifting each other up, and trying to make their country whole. A Haitian colleague lost his wife and children in the earthquake, yet he could not be persuaded to rest. He kept working around the clock to help others. Another colleague described the agony of children enduring amputations of limbs without anesthesia or pain medication. They would have died of infection without this intervention, but she'll never recover from this memory. Nor will the colleagues who cared for thousands of children who had been separated from their parents. Some were so young, they were nonverbal. It took months to trace and verify their identities and to reunite them with their families.

Humans are generous and flawed. Sometimes the bad outweighs the good. When people are suffering, nothing we do is fast enough or good enough, even when it is fast and good. Also true, there are some who stand beside the communities they love. They stay put when things are not going well and no solutions are visible. They trudge through and focus on what can be done, determined to stay on course because they know what is at stake.

When you love people, you stick around even when donors lose interest and the TV camera crews leave, or the next hurdle appears.

For 20 years, Lisa Szarkowski led UNICEF USA's humanitarian emergency response. This work brought her to dozens of countries in the throes of both manmade and natural disasters.

Top photo: On January 19, 2010, one week after a massive earthquake devastated Haiti, men gather at a table and chairs set up in the middle of a street filled with debris in Port-au-Prince, the capital. © UNICEF/UNI78169/LeMoyne