Look — up in the sky! A new test corridor gets up and running. The goal: to study innovative ways drone technology might be used to support UNICEF's work, and help children and families in need.

Located in Kasungu in central Malawi, the corridor provides a research platform for private sector, universities and other partners to explore how drones can be used to deliver services that benefit communities in developing countries. It is the first testing ground of its kind in Africa, and one of the first in the world to have a development focus rather than a commercial one.

With drones we can easily fly over the affected area, and see clearly the impact on the ground. 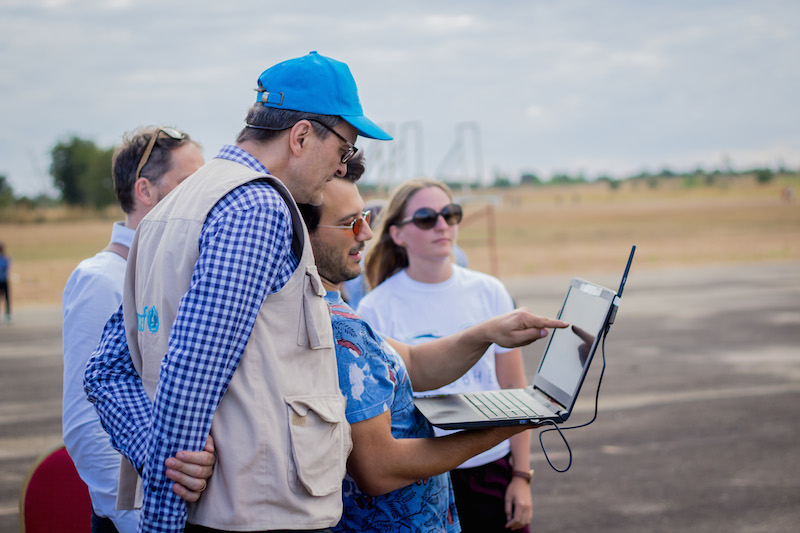 Johannes Wedenig, UNICEF Malawi Representative, joins the UNICEF Innovation team during a drone test. One idea is to have drones carry humanitarian supplies to areas cut off from regular transport routes.  © UN070229/Chisiza

Earlier this year, UNICEF and partners dispatched drones from Salima, Lilongwe and Karonga to survey a rural area hit by severe flooding and quickly gauge the needs of affected families. Officials described the results as cheaper and better than satellite imagery.

"Malawi has limited road access to rural areas even at the best of times, and after a flash flood, earth roads can turn to rivers, completely cutting off communities," said UNICEF Malawi Representative Johannes Wedenig. "With UAVs, we can easily fly over the affected area and see clearly the impact on the ground." UNICEF is also exploring the potential use of drones in search and rescue efforts. A community demonstration marked the official launch of a new testing corridor for drones in Kasungu, central Malawi. © UNICEF/UN070228/Chisiza

All UAV projects tested in the corridor will have to abide by the UNICEF Innovation principles. This means they must be open source, open data, shareable and designed for scale. Companies and individuals are welcome to submit proposals.

Check out what else is happening at UNICEF Innovation Labs.

Photo at top: Children get excited to see a drone take flight at the new test corridor in Kasungu, central Malawi, set up by UNICEF and partners to study humanitarian uses for UAV technology in developing countries.  © UNICEF/UN070230/Chisiza