How Breastfeeding Could Save More Than 820,000 Young Lives Annually | UNICEF USA

How Breastfeeding Could Save More Than 820,000 Young Lives Annually

A look at why UNICEF remains passionately committed to promoting and increasing the practice, and supporting breastfeeding mothers everywhere.

To celebrate, UNICEF joins partners in emphasizing the benefits of breastfeeding, and renewing our longstanding commitment to promoting the practice to help ensure the healthy growth, development and survival of children around the world. 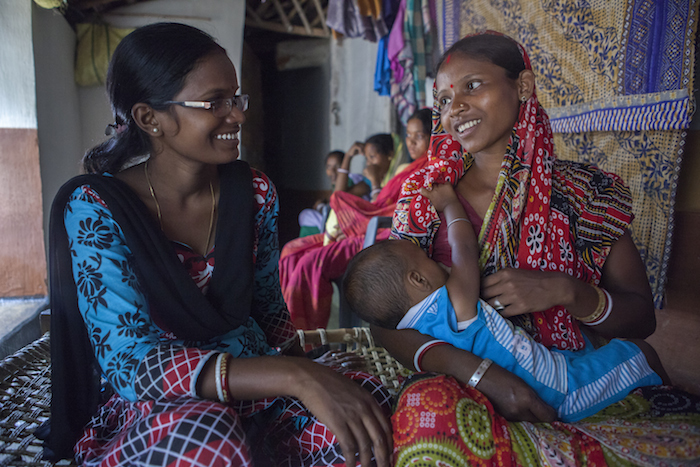 A community health volunteer advises a mother on breastfeeding, nutrition and infant care as part of a UNICEF-supported program in Jharkhand State, India. In recent years, India has seen a significant increase in the percentage of women who exclusively breastfeed their babies for the first six months of life, thanks to the implementation of new policies that effectively promote the practice. © UNICEF/UNI148848/Vishwanathan

UNICEF has long advocated for breastfeeding as the way to give babies the best start in life. In the developing world, it's the closest thing there is to a magic bullet against child malnutrition and infant mortality.

Breastmilk is safe and reliable. It is always the right temperature, requires no preparation and is available even in environments with poor sanitation and unsafe drinking water — a steady and complete source of nutrition, even when resources are scarce and in times of crisis. Breastmilk contains all the water a baby needs, even in hot climates.

It also contains a mother's antibodies needed to combat disease. Children who are breastfed are less likely to contract diarrhea-related illnesses and respiratory infections, and are at lower risk of obesity, diabetes and other chronic conditions later in life. Breastfeeding is also known to boost cognitive development and lead to higher educational achievement.

Optimal breastfeeding would save more than 820,000 young lives every year

According to researchers, achieving near-universal breastfeeding would save more than 820,000 young lives every year in developing countries. Optimal breastfeeding, according to the World Health Organization (WHO), means starting breastfeeding within an hour of birth, exclusive breastfeeding (meaning no additional foods or liquids, not even water) for the first six months of life and continued breastfeeding until age 2 or beyond.

A growing number of Chinese mothers are overcoming obstacles to breastfeeding their babies after maternity leave. As a working mother, Fiona, above, managed to breastfeed her baby for 28 months. “I made it because I learned correct knowledge of breastfeeding online, and also having a healthy baby makes me more confident," she told UNICEF. "But the biggest support is what I got from my family.” © UNICEF/UNI166592/Liu

And yet, an estimated 3 out of 5 babies are not breastfed within that first hour, putting them at higher risk of death and disease, and making them less likely to continue breastfeeding, according to a new report by UNICEF and WHO. Most of these babies are born in low- and middle-income countries.

Skin-to-skin contact along with suckling stimulates the mother's production of breastmilk and — critically — colostrum, often called baby's first vaccine. "When it comes to the start of breastfeeding, timing is everything," UNICEF Executive Director Henrietta H. Fore said. The UNICEF/WHO report, entitled Capture the Moment, analyzes data from 76 countries and explores the reasons so many newborns are left waiting too long. "Each year, millions of newborns miss out on the benefits of early breastfeeding, and the reasons — all too often — are things we can change," Fore said.

While overall breastfeeding rates have gone up in recent years, other persistent gaps are a strong indication that countries are not informing, empowering and supporting every mother to breastfeed.

As part of its global campaign Every Child Alive, UNICEF urges governments, the private sector, civil society groups and communities to work together to increase breastfeeding rates by:

"Breastfeeding is the best gift a mother, rich or poor, can give her child, as well as herself," said Shahida Azfar, UNICEF's Acting Deputy Executive Director. "We must give the world's mothers the support they need to breastfeed."

There has been progress in recent years. Countries like India and Vietnam, for example, have put into place strong policies to protect and promote breastfeeding. Others, like Turkmenistan, have very high rates of mothers giving birth in baby-friendly hospitals where breastfeeding is encouraged. Almost all mothers in New Zealand and Sri Lanka give birth at a baby-friendly facility. Cultural and political factors also play a role, as well as the level of support a new mother receives from her baby's father, her family, employer and community.

Breastfeeding and sustainable development go hand in hand. Improving the health and well-being of women and children provides a foundation for a more prosperous future for all.

Learn more about how UNICEF is working to support breastfeeding mothers, to give all children the best start in life.

Top photo: A mother breastfeeds her 6-month-old baby outside a health center in the village of Preak Krabao, Kang Meas District, Cambodia. © UNICEF/UN074025/Pirozzi