Getting Girls Back to School in Afghanistan

Every child deserves the chance to go to school. But more than 30 years of sustained conflict have devastated Afghanistan's education system. An estimated 3.7 million children between the ages of 7 and 17 are out of school across the country, 60 percent of them girls. Of those enrolled, only 54 percent actually complete elementary school. 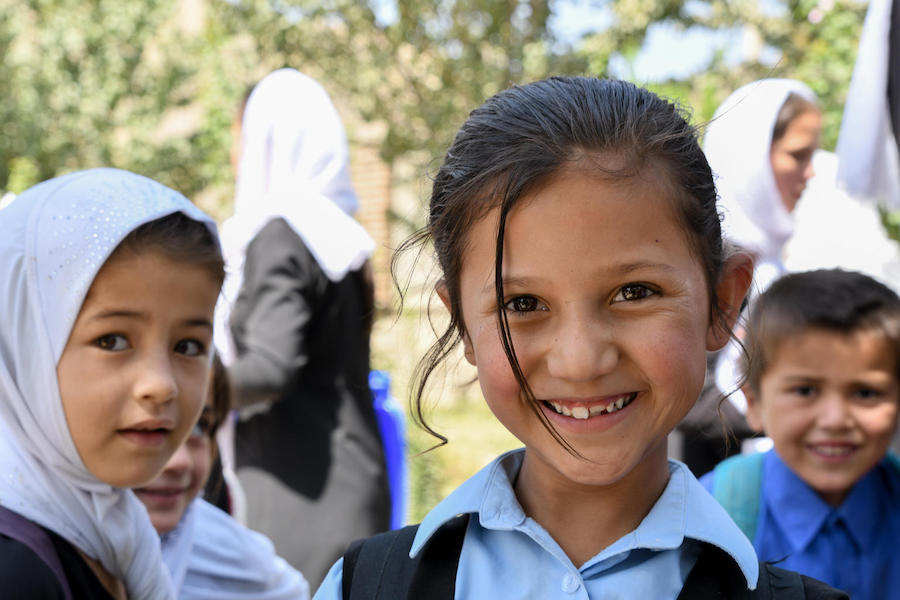 UNICEF and partners are working hard to get Afghanistan's children, particularly girls, back in the classroom — distributing education supplies, training teachers, arranging teacher salary payments, supporting community-based learning, improving school sanitation facilities and more. When you educate a girl, you educate a nation. Above, primary students take a break on the playground at UNICEF-supported Turgani High School in Faizabad, a northeastern province of Afghanistan, in August 2019. © UNICEF/UNI206049/Karimi 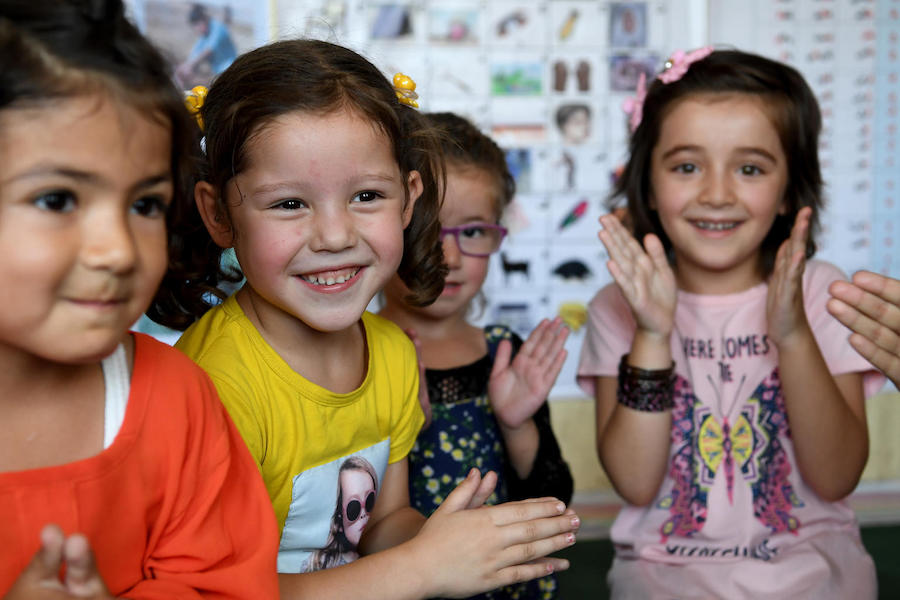 Many parents in Afghanistan are reluctant to send their children to school because they fear for their safety. Attacks on the nation's schools tripled between 2017 and 2018, surging from 68 to 192. In the first half of 2019, 36 schools across the country were reported closed due to violence, depriving 13,894 children of education. Above, primary students play a clapping game at Turgani High School in Faizabad, the largest city of Badakhshan, a northern province of Afghanistan. © UNICEF/UN0339513/Frank Dejongh 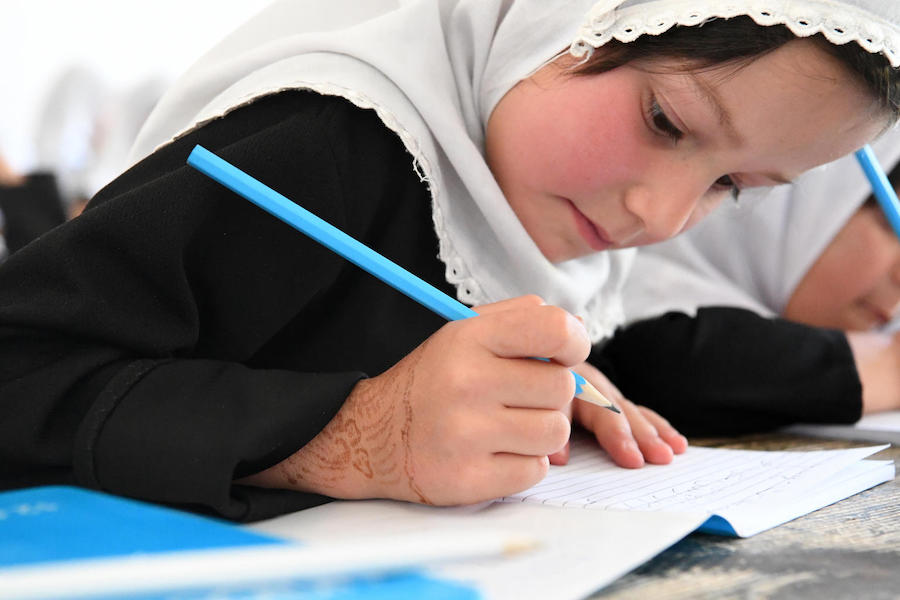 Low enrollment among girls can be partly explained by a lack of female teachers in Afghanistan, especially in rural schools. Years of a fragile education system have left the nation's teacher pool undereducated and underprepared to instruct the next generation. Only 48 percent of the country's teachers have the minimum academic qualifications (equivalent to an Associate's Degree).

The UNICEF-supported Girls' Access to Teacher's Education (GATE) program offers female high school students who would like to become teachers a two-year training course. Above, a young student practices her penmanship in her new UNICEF notebook at the Bibi Amina Girls High School in Panjshir, a province in northern Afghanistan. © UNICEF/UN0340396/Frank Dejongh

Twelve-year-old Wasilla (above, center) is enrolled in the third grade at a UNICEF-supported accelerated learning center (ALC) in Kotal Morcha village, Kandahar province. "I came from Shawlikot district where we have a big house, a large garden and lots of land, but we lacked security," she says. Determined to see his youngest daughter continue her education,Wasilla's father moved the family to the relative safety of Kotal Morcha. "She is a true inspiration to the whole class," says Wasilla's teacher. "I hope all parents will do the same as Wasilla's father: Believe in the value of educating girls."

In 2018, UNICEF supported 5,300 community-based schools and ALCs in remote areas of Afghanistan, reaching over 150,000 students, more than half of them girls. They learn basic literacy and numeracy skills, along with critical life skills including cooperation, team work, communication and creativity. There are 58 centers currently functioning in Kandahar province. "I want to thank my parents for believing in my education and thanks to those supporting us to learn," says Wasilla. "I would like to become a teacher one day and return to my hometown to enroll girls in school." © UNICEF Afghanistan Sometimes something as simple as menstruation keeps girls out of school. Only 16 percent of Afghanistan's schools are girls-only, and many of them lack the proper hygiene facilities needed to help girls manage their periods. UNICEF has accelerated work with the Ministry of Education to bring safe water, separate toilets for girls and boys, hand-washing stations and curricula on menstrual hygiene to schools across the country. The girls above have just washed their hands at UNICEF-supported BiBi Mehro Girls High School, in Kabul, the capital of Afghanistan.  © UNICEF/UN0339980/Frank Dejongh 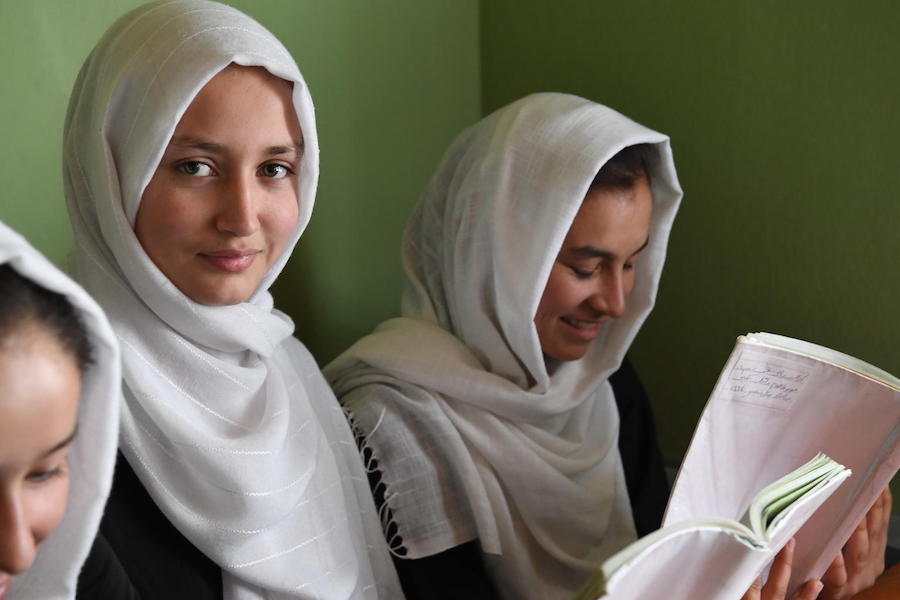 Another barrier to education: early marriage. Girls continue to marry young in Afghanistan — 17 percent before their 15th birthday. A recent study showed that 42 percent of households had at least one family member who was married before the age of 18. UNICEF Afghanistan's adolescent program is piloting a cash grant system designed to reduce the school drop-out rate among girls. The program's initial phase will reach 1,000 households in Ghor and Herat provinces.

Girls who complete high school grow up to become better thinkers, better citizens and better parents to their own children. They also contribute more to their nation's economy. According to a 2018 World Bank report, limited educational opportunities for girls cost countries up to $30 trillion in lost lifetime productivity and earnings. Above: There are two shifts at Sayef High School in Faizabad, Badakhstan, a northern province of Afghanistan — girls attend in the morning and boys in the afternoon. © UNICEF/UN0339549/Frank Dejongh

Please support UNICEF's work to educate and empower girls around the world.

Top photo:In August 2019, students at the Bibi Amina Girls High School in Panjshir, a province in the North of Afghanistan, are excited to be back in school with their new UNICEF school supplies. © UNICEF/UN0340399/Frank Dejongh