For many of Afghanistan's children, particularly those in the poorest and most isolated areas, completing elementary school remains a distant dream. The nation's education system has been devastated by more than 30 years of sustained conflict. Schools have been attacked and closed; teachers killed, injured and abducted. An estimated 3.7 million children are out of school, 60 percent of them girls. But despite the dangers, devoted teachers are giving their all to ensure that Afghanistan's next generation of girls get an education and reach their full potential.

It's no wonder that Afghanistan's children see their teachers as real-life heroes. During a visit to a girls' school in Nangarhar province, in eastern Afghanistan, UNICEF Education Specialist Anita Haidary (above, far right) asked a classroom of eager students what they wanted to be when they grew up. "You'!" they all said.

"I asked them, 'Why not?' " the veteran teacher recalled. " 'You have better opportunities than I had as a refugee. You live in your own country, have a nice school with good facilities and your education is free. Set your targets high and don't give up. Hard times will make you stronger than before.' " 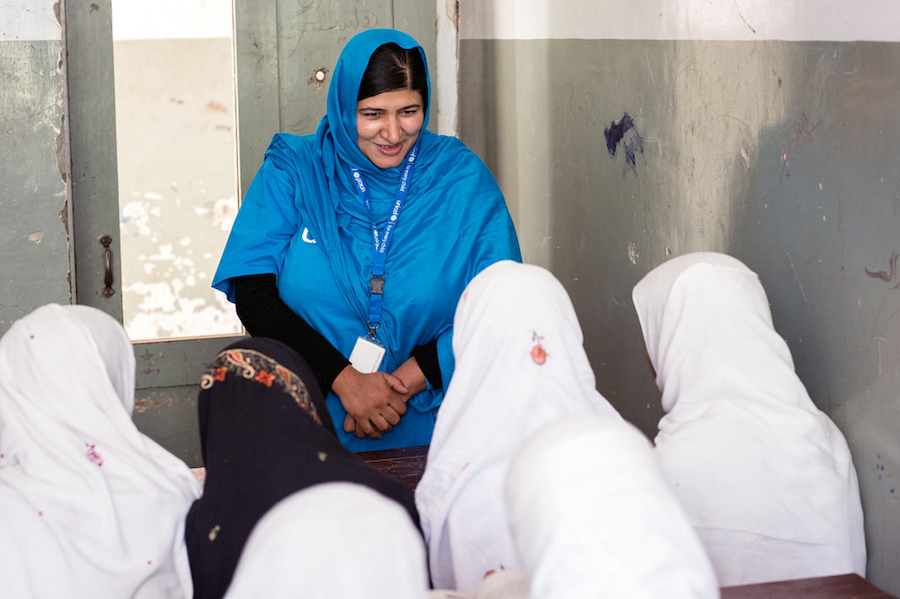 When she was growing up, Kaidar's family moved many times to escape the war in Afghanistan. She saw firsthand how the chance to go to school can make all the difference in a young girl's life. Her mother never learned to read or write, but was determined that her daughters would have the opportunity to learn.  Her father, an advocate of equal opportunities for girls, encouraged Kaidar's passion for education. She went on to become one of the few girls in her class to graduate from high school, and the only girl to study math and physics in her university class.

At 16, Kaidar opened a home-based class to teach literacy skills to girls and women. "It brought me great happiness to see young girls learn to write their name for the first time," she said, describing her passion for education. "When you feel that every moment of your life is learning, your life becomes more purposeful. Even from a very young age, I knew my purpose in life was to help children learn, no matter who they are or where they come from." © UNICEF/Afghanistan/2019/Haidary 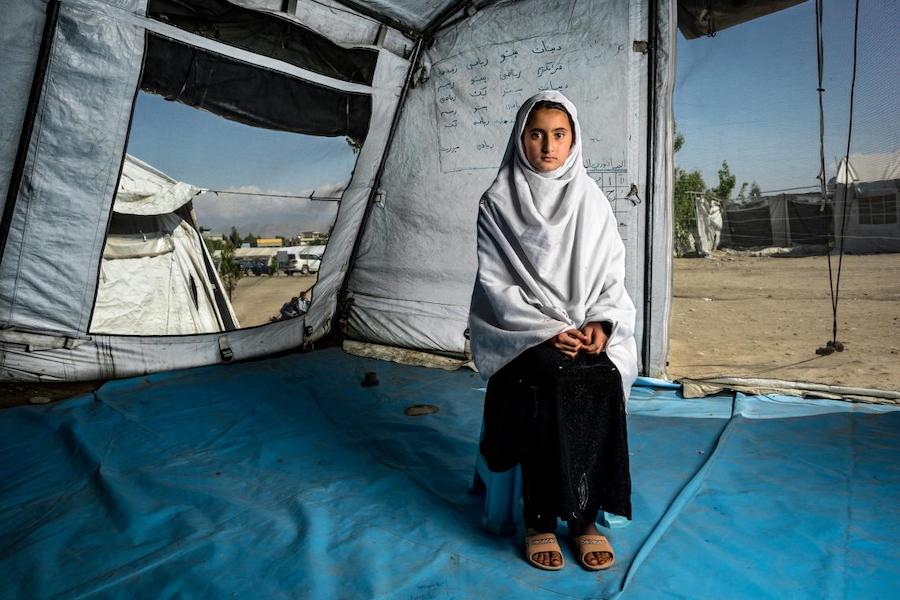 Twelve-year-old Kayenat (above) and her family fled intense fighting in the Shinwar district of Nangarhar province in 2017. "Our school was burned, destroyed," she said. By the time they left, Kayenat couldn't attend classes anyway. "Girls weren't allowed to go to school," she explained, sadly. © UNICEF/UN0309024/Kokic 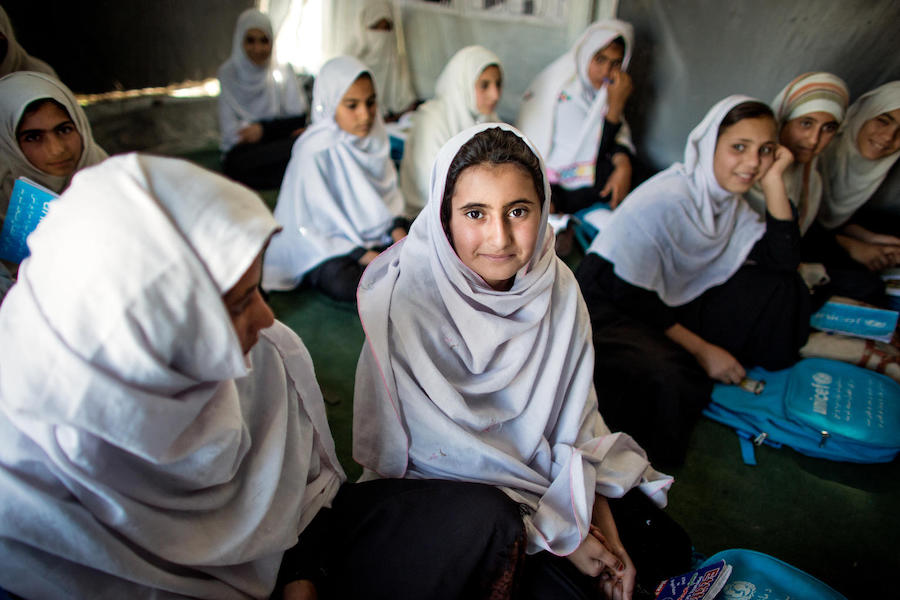 Kayenat's father moved the family to Jalalabad, the provincial capital, for safety. Despite the obstacles, Kayenat was determined to resume her education. Her parents enrolled her in the UNICEF-supported Zangora Community-Based Education (CBE) cluster in Surkhord district, Nangarhar province. Happy to be back in the classroom, Kayenat is studying math and Pashto and feeling more hopeful about her future.

More than 1,771 students and 47 teachers, including 18 female teachers, from different districts of Nangarhar and Kunar risk violence every day to participate in the CBE cluster, which provides education opportunities to internally displaced students and returnees. © UNICEF/UN0309054/Kokic 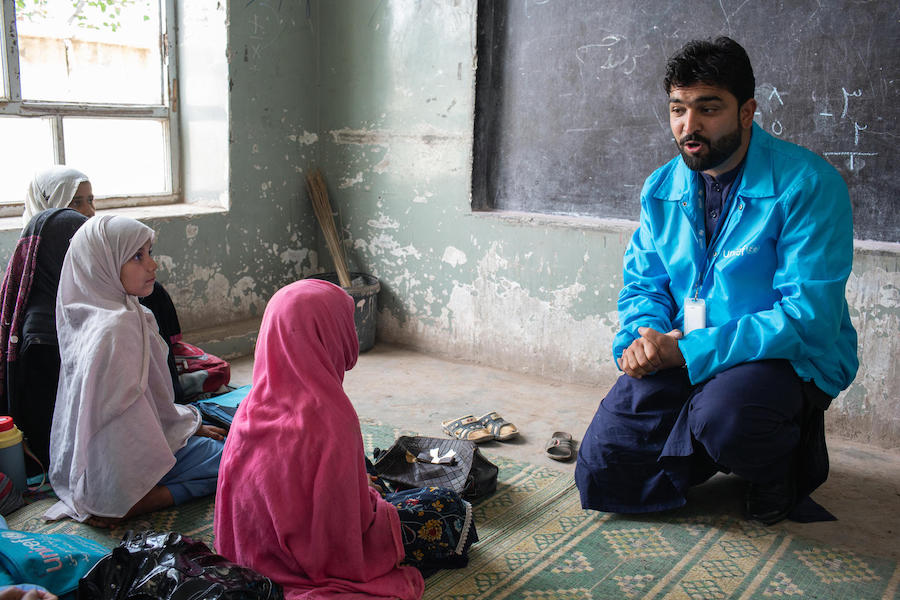 During the nation's 2018 parliamentary elections, many schools were used as polling centers and subsequently attacked, among them the Peer Sayed Ahmad Gilani School in Surkhrod district, Nangarhar province. None of the more than 3,000 students were injured when a bomb placed on the school's outside wall blew up, but many were traumatized for months. UNICEF and partners provide psychosocial support to students to help them recover and get back to learning. Above, UNICEF Education Officer Masood Nassir talks to a class of girls at the Gilani school in April 2019. © UNICEF/UN0309062/Kokic 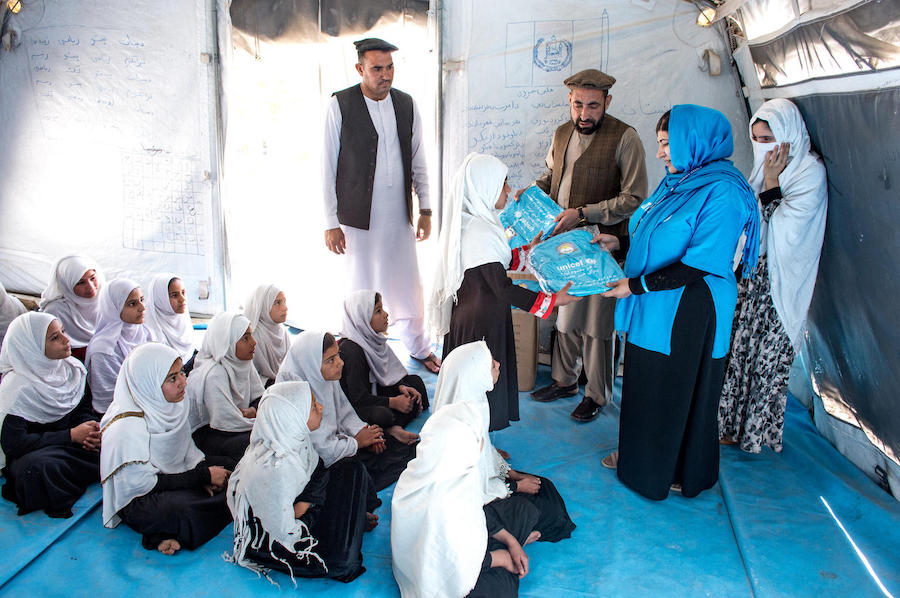 Every child has the right to an education. UNICEF works with the government and partners to ensure that conflict, poverty and discrimination do not prevent Afghanistan's girls from getting the education they need to thrive. Helping more children enroll in school and keeping them there will help create the country's next generation of healthy, responsible citizens.

Between 2001 and 2018, school enrollment in Afghanistan increased from 1 million to 9.6 million. There is more work to be done. "Education prevails," said Haidary, as she distributed UNICEF school bags and notebooks to a classroom of eager young girls in Nangarhar province. "These students have understood the value of education. We support them to be at school and learning." © UNICEF/UN0309064/Kokic