Flooding and Conflict Drive Families From their Homes in South Sudan

Pibor, South Sudan — Not once, not twice, but four times Nyachimach and her famliy have been displaced since June 2020. The situation has started to take its toll on her youngest children. Four-year-old Koli has had a fever and a cough for over a month now. Her youngest, 4-month-old Gol, has followed suit. That is why they are seated in the shade of a tarpaulin outside a makeshift health center in the town of Pibor, in Jonglei State.

The health center, one of two supported by UNICEF in Pibor, is made of tents and tarpaulins standing on what is still dry land, for now. Floodwater continue to rise on a daily basis. The clinic building was flooded in September when the Pibor River started overflowing its banks. Every day, new pieces of land, houses and roads are swallowed up by water from the river. 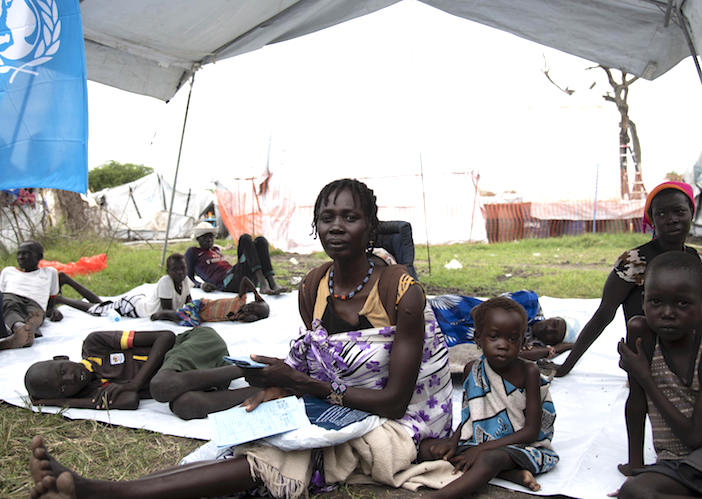 Nyachimach, her husband and their eight children have been displaced four times by conflict between armed groups and heavy flooding in South Sudan, Above, they wait outside a UNICEF-supported health facility in Pibor, Jonglei State. © UNICEF/UNI374906/Ryeng

Bullets were the reason Nyachimach, her husband and their eight children fled the first time. "We went from Manyabol to Gumuruk to save our lives," says Nyachimach. Hundreds of people were wounded in the intercommunal clashes; many were killed. "Then Gumuruk was attacked, and we had to flee again."

The family of ten decided to seek shelter in Pibor, where they had extended family, but shortly after they arrived, the flood forced them out of the shelter. "We moved twice in Pibor due to the flooding," Nyachimach explains. 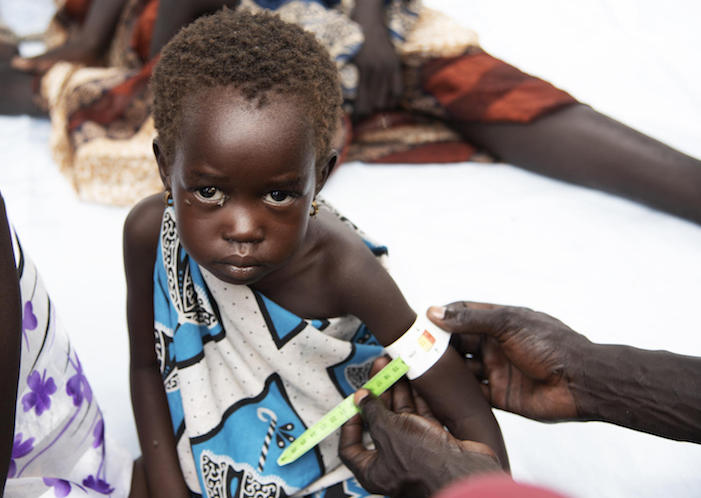 Four-year-old Koli being screened for malnutrition at a UNICEF-supported health center in Pibor, South Sudan. © UNICEF/UNI374903/Ryeng

Koli sits quietly next to her mother. "She doesn't have much energy," Nyachimach says. They left everything when they fled their home the first time. The flood has made it difficult to cover their basic needs, such as food and water. "I worry a lot. It is not a good feeling when you can't provide for your children."

At the health center, a test confirms that Koli is suffering from malaria. She is given artemisinin as treatment and the family receives a mosquito net to protect themselves from the insects that cause the malaria infection. Koli is also quickly screened for malnutrition. The measurement tape is in the red, indicating that the four-year-old is suffering from severe acute malnutrition. She is referred to the nearby UNICEF-supported nutrition center, now housed in a tent after the outpatient therapeutic treatment center flooded.

Maze, center, brought her three-year-old daughter, Kaka (right), to a UNICEF-supported health center in Pibor, South Sudan after weeks of diarrhea, coughing and fever. After health workers evaluated Kaka, they discovered that her older sister, 4-year-old Katalin, was suffering from severe acute malnutrition, which can be fatal if left untreated. Both girls were admitted to the nutrition program for treatment. © UNICEF/UNI374938/Ryeng

Mama Maze is watching while Koli is being examined at the health center. She is there with her daughters Kaka, 3, and Katalin, 4. Kaka has had diarrhea, a cough and a high fever for the past month. Maze has watched her daughter getting thinner by the day and she is worried that she might not survive.

The family of five is from Kongor. When fighting broke out, they fled by foot to Pibor, walking for several days. "At least there is no fighting here, but life is difficult," Maze says. The first shelter they lived in after arriving in Pibor flooded; now they are living live next to the airstrip, which will hopefully be safe from the flood water. Last year's flooding reached all the way to the airstrip but the forecast indicates that Pibor's 2020 floods will not reach the same levels. 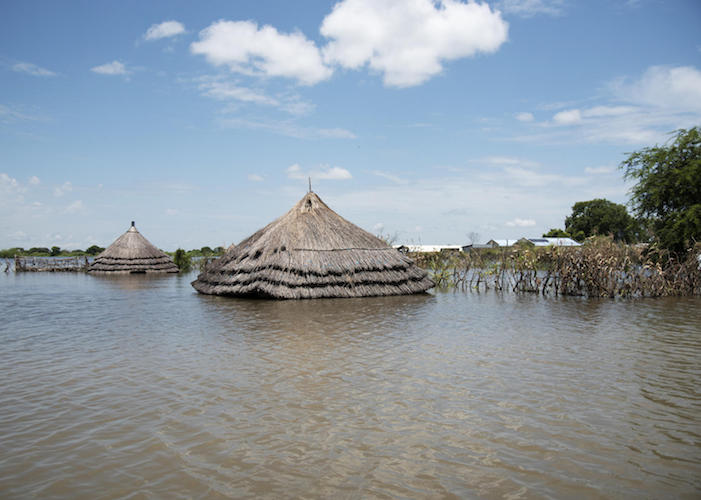 Floodwaters in Pibor, South Sudan have swallowed up houses, leaving only their rooftops visible. © UNICEF/UNI374959/Ryeng

Maze is mostly worried about Kaka, but the nutrition workers see immediately that Katalin is also in trouble. Kaka's screening shows she is suffering from moderate acute malnutrition. Katalin, on the other hand, is severely malnourished. Both girls are enrolled in the UNICEF-supported nutrition program operated by Join Aid Management. Under normal conditions, both children should bounce back to health within six to eight weeks. Some 600,000 people in South Sudan have been affected by the floods this year. Jonglei State, where Pibor is situated, is one of the areas hardest hit. Jonglei is also where intercommunal violence has flared up since February 2020, killing, wounding and displacing families. Many of the families who have sought refuge from the bullets in other parts of Jonglei now find themselves displaced multiple times due to reoccuring fighting — and now flooding.

UNICEF and partners are responding to the double crisis by providing safe drinking water through the dissemination of water purification powder and buckets for the purification process. Communal latrines have been constructed to support the displaced.

UNICEF has made efforts to ensure the continuation of essential health and nutrition services, negotiating new land where temporary clinics can set up and providing tents and supplies. UNICEF and partners are also providing family tracing and reunification services to families separated by bullets and flood waters.

UNICEF South Sudan would like to thank the government of Belgium and Sweden for the generous contributions to our humanitarian appeal, which allows us to respond quickly to emerging needs. A big thank you to USAID, which is funding essential parts of the WASH (Water, Sanitation and Hygiene) core pipeline, allowing a rapid WASH response. Also a big thank you to UKAir for their donations for malaria treatment and prevention through the HARISS program.

Your generous contribution will help UNICEF reach the most vulnerable in South Sudan with the services and supplies they need to survive and thrive. Please donate.

Top photo: Early and heavy seasonal rains have caused severe flooding in several parts of South Sudan. In Pibor, Jonglei State, many people have taken shelter in and outside the school, which remains on dry land, for now. © UNICEF/UNI374960/Ryeng