First a Volcano, Now an Earthquake in Democratic Republic of the Congo | UNICEF USA

First a Volcano, Now an Earthquake in Democratic Republic of the Congo

UPDATE: On May 27, thousands of families left their homes yet again after authorities issued an evacuation order for parts of the city of Goma following warnings that Mount Nyiragongo might erupt a second time.

Just three days after a volcanic eruption killed dozens and forced tens of thousands of people out of their homes in the Democratic Republic of the Congo, an earthquake sent families rushing for safety a second time on May 22, 2021. The quake toppled several buildings; large cracks appeared across major boulevards in the eastern city of Goma, the capital of North Kivu province.

Panicked families grabbed what they could carry and raced for shelter as Mount Nyiragongo erupted on the night of May 22, six miles from Goma. Nearly 1,000 children were separated from their families during the emergency evacuation on the first day.

Lava from the eruption destroyed 17 villages as it approached the outskirts of the city. More than 5,000 people fled across the border into Rwanda and thousands poured into the small town of Sake, 16 miles northwest of Goma, where at least 19 cholera cases have been reported in the past two weeks. "Whenever large groups of people are displaced in a short period of time, the dangers to children increase," warned UNICEF Representative in the DRC Edouard Beigbeder. "We must be alert to immediate risks for children on the move, including protection issues, nutrition and health risks, including waterborne disease and especially the spread of cholera.” 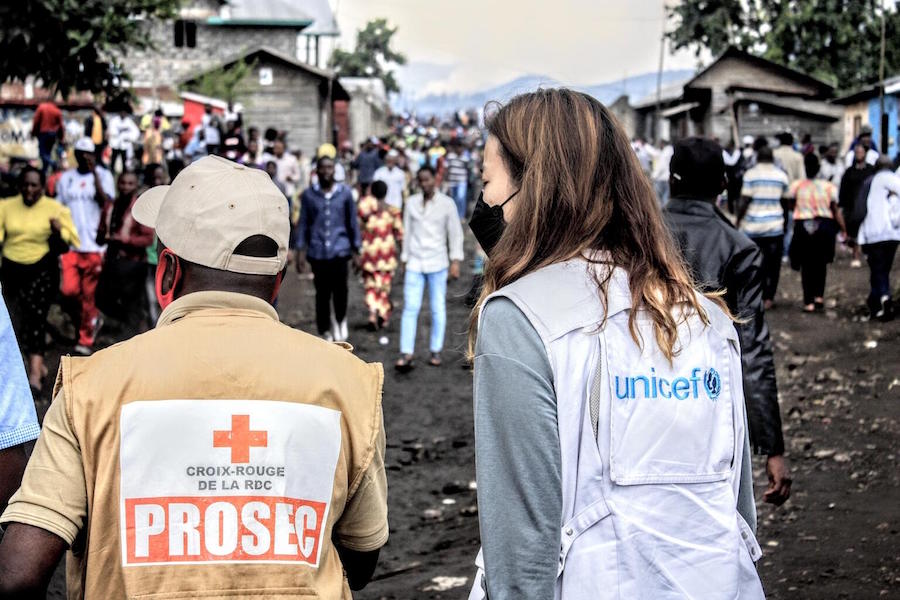 UNICEF child protection teams set up two transit centers for unaccompanied and separated children, and are working with the Congolese authorities to identify children and locate their family members. As of May 26, 700 have been reunited with family. An additional 142 have been placed in traditional foster families and 78 are staying in a transit center, where they are getting psychosocial support. More than 170 families are still looking for their lost children.

"The children were scattered all over the place," Enyo Gbedemah, a UNICEF child protection specialist, told Reuters by phone from Goma. "We are in a region where there are a lot of kidnappings of children ... Some can end up in mines and even in armed groups." 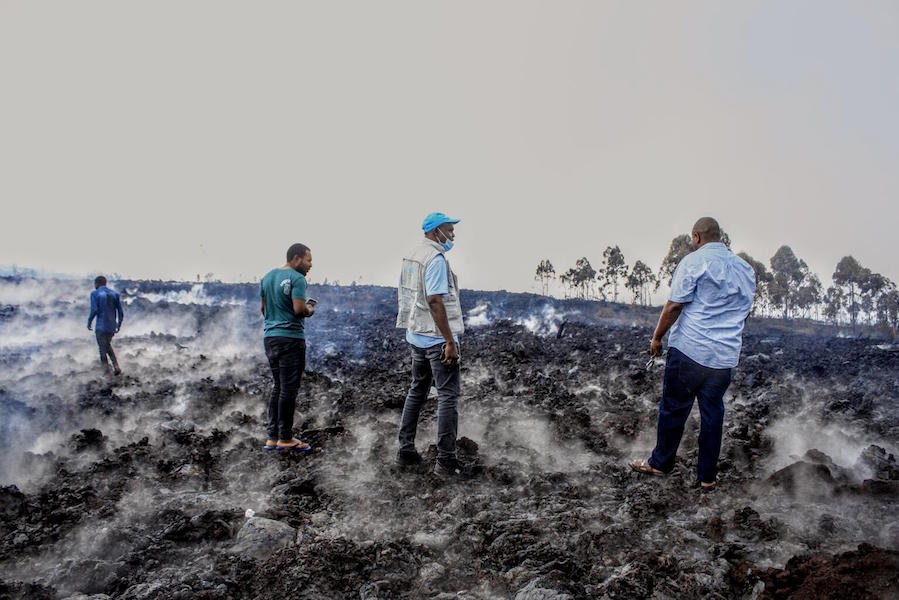 In the days following the volcanic eruption, families made their way home to find their houses damaged or destroyed and water and electricity in short supply. An estimated 500,000 people have lost access to safe water, paving the way for a possible large-scale cholera outbreak. To limit the spread of waterborne disease, UNICEF is installing chlorination water points in and around Sake. Several water supply networks in the area will be chlorinated shortly. UNICEF is also working with partners to find and trace cholera infections in order to stop the disease from spreading, especially among the thousands of residents returning to Goma's crowded neighborhoods.

UNICEF is arranging the delivery of essential non-food Items — such as jerry cans and tarpaulins — in addition to providing vitally important water and sanitation (WASH) equipment. 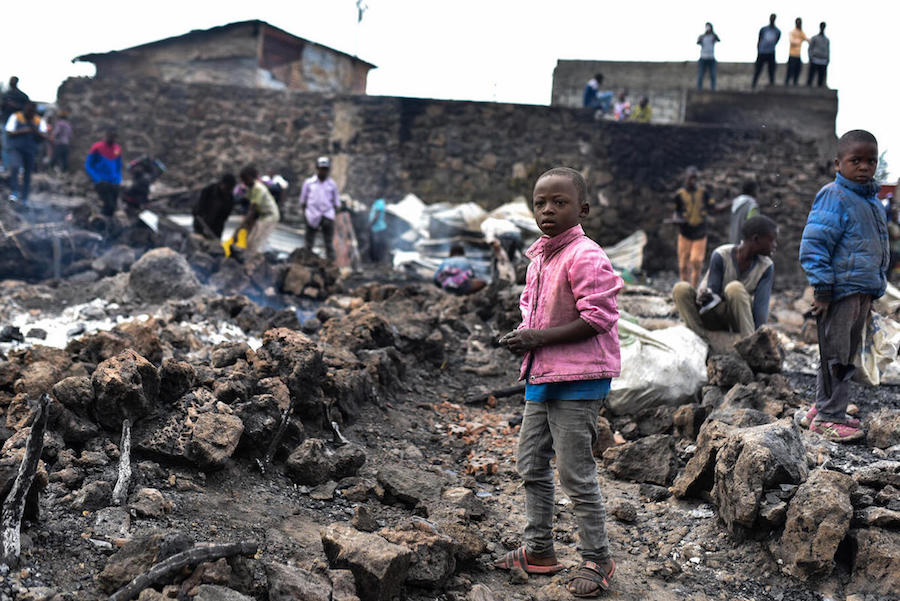 Mount Nyiragongo is one of the world's most active and deadly volcanoes. Nyiragongo's last eruption in 2002 left more than 100,000 people homeless. The lava lake inside the volcano has refilled since May 22, leading to fears of another possible eruption. 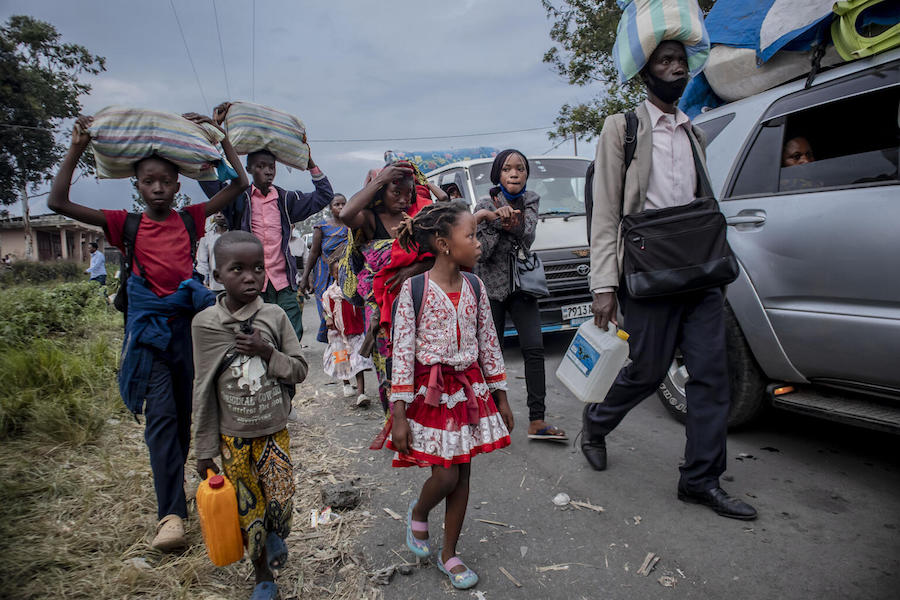 UPDATE: Above and below, Goma residents left their homes yet again on May 27, after Congolese authorities ordered the partial evacuation of the city. More than 2 million people live in the wider Goma area. Whenever and wherever disaster strikes, UNICEF is there, working with partners to protect children and provide essential services. Your generous gift can help save lives.

Top photo: Children stand amidst lava from the volcanic eruption of Mount Nyiragongo, which occurred late on May 22, 2021 in eastern Democratic Republic of the Congo. UNICEF is on the ground, working with partners to protect children separated from their parents and provide essential services to families caught up in this unfolding humanitarian crisis. © UNICEF/UN0466151/Acland