In Ethiopia, Girls Speak Out Against a Sexually Abusive Teacher

Everywhere, girls are saying "me too" and speaking out against sexual harassment and assault. With UNICEF's help, these girls made it stop.

In the weeks since UNICEF Ambassador Alyssa Milano encouraged those who have been sexually abused to write "Me too" in their social media accounts, the phrase has been used over 1.7 million times in 85 countries, according to Twitter. First popularized by activist Tarana Burke ten years ago to shed light on the problem of gender-based violence and to let victims know they were not alone, the #MeToo social media movement has dramatically emphasized the scale of the issue. To help give voice to girls and women who are suffering in silence, UNICEF launched the #HerToo campaign.

In Ethiopia, Konjit*,  a 14-year-old eighth grader who attends a junior high school in Addis Ababa, is one of the brave girls who has dared to speak out about sexual assault. Last year, one of her closest friends confided in Konjit that their teacher had been sexually abusing her. Konjit, a member of her school's gender club, knew that what the teacher was doing was illegal.

Last year, one of her closest friends confided in Konjit that their teacher had been sexually abusing her.

At weekly club meetings, Konjit and her classmates learned about Ethiopia's national code of conduct, which clearly states that acts of abuse are punishable by school law. After discussing the matter with her friend, Konjit decided to bring the case to the gender club to examine what steps they needed to take to punish the teacher and stop the abuse from continuing. 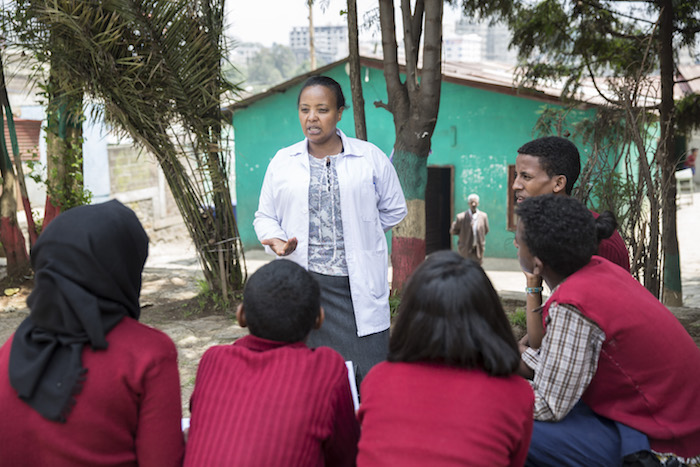 The word began to spread to other classmates. At first, many of the girls were silent, out of fear and shame, but once one girl spoke out, others found the courage to tell their stories. More girls began speaking up to say, “Me too.”

Once one girl spoke out, others found the courage to tell their stories.

Even as they began to mobilize, the girls feared that the teacher would find out and do more harm. “It was scary for us because if he saw us together he may know what we were up to. We were all so afraid of the teacher,” said Konjit.

Yet this did not stop the girls. Konjit and other gender club members were determined to help their friends.

In the end, they learned that at least nine girls had been sexually abused by the same teacher. With support from the school’s vice director, Netsanet Abebe, the gender club brought written statements from the victims as evidence to the school’s Gender-Based Violence Prevention and Response Code of Conduct Committee. Referencing the code chapter that leads to severe types of misconduct, the committee unanimously made the decision to dismiss the teacher. The school also referred the case to the justice department for legal action; the teacher was then convicted in court and sent to jail. 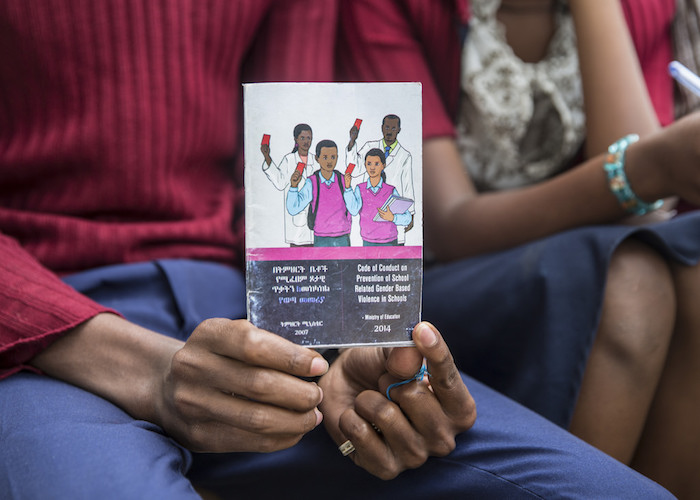 UNICEF worked with the Ethiopian Ministry of Education to develop a national code of conduct and build a system to report on gender-based violence and abuse in schools. ©UNICEF Ethiopia/2017/Demissew Bizuwerk

If these incidents had happened only a few years earlier, the teacher would have gotten away with his actions. But two years ago UNICEF began supporting the Ethiopian Ministry of Education to develop a national code of conduct, build a system to report on gender-based violence and abuse, and strengthen the capacity of gender clubs to put reporting channels in place. UNICEF also incorporated men and boys into the clubs so that they can play a central role in combatting gender-based violence.

They all took huge risks to tell their stories, but because they understood their legal rights they knew it was well worth it.

Today, Konjit and her friends feel a strong sense of empowerment. They took huge risks to tell their stories. But because they understood their legal rights, they knew it was well worth it. The girls now know what to do to stop this from happening to other classmates.

As one of the victims strongly puts it, "Now that the teacher is out, no one else would dare to do that to us. We feel stronger and more confident to take action!"

Help girls grow up in safety, with dignity by making a 100 percent tax-deductible donation to UNICEF.

Top photo: At a junior high school in Addis Ababa, Ethiopia, teenage girls rallied around a classmate after she confided that she was being sexually abused by a teacher. Thanks to a UNICEF-supported effort by the Ethiopian Ministry of Education to build a system to report on gender-based violence, the girls spoke out against the abusive teacher, who was dismissed and later jailed for his actions. ©UNICEF Ethiopia/2017/Demissew Bizuwerk