Stigma and harmful social norms serve as both a result of and a catalyst for the trafficking of women and children.

Human trafficking is big business: Every day, children, women and men around the world are trapped and tricked into commercial sexual exploitation and forced labor. The trafficking and labor exploitation of children alone generates an estimated $39 billion a year globally, robbing its victims of their health, their education and their future.

Even those lucky enough to escape remain at risk. For survivors of sexual trafficking, the shame and isolation that follow can be devastating. In many cultures, any association with the sex industry — whether by force or by choice — is highly stigmatized. Stigma, a process that attempts to discredit or disgrace a person or group based on an identity or a circumstance, can keep trafficking victims from seeking out badly needed assistance and counseling.

Fear of shame and isolation keeps many sex trafficking survivors from seeking help, and can expose them to further abuse

Families may disown trafficked girls and women, blaming them and not their traffickers for their ordeal. In the U.S., a majority of states treat child sex trafficking victims as criminals. Support services designed to help survivors of gender-based violence, domestic violence or exploitation may not adequately address the needs of trafficking survivors. Without the support and counseling they need, trafficking survivors may find themselves marginalized and open to further abuse. 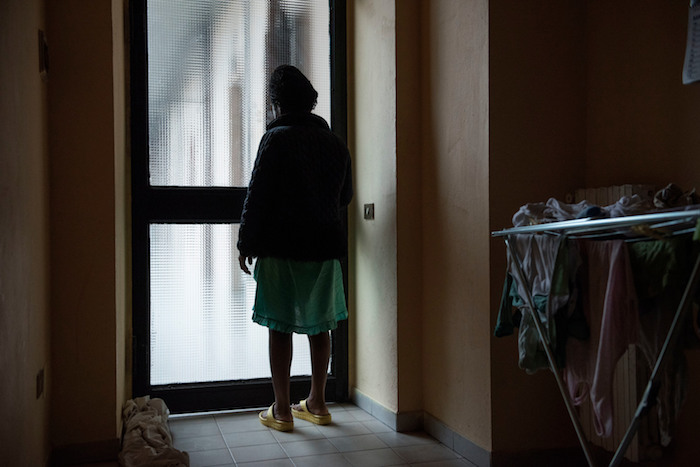 Diane, a Nigerian girl who is pregnant with twins after being forced into prostitution following her arrival in Italy via the Mediterranean Sea route from Libya, stands in a home where she is being sheltered in Asti, Italy. © UNICEF/UN069365/Romenz

UNICEF and the International Organization on Migration (IOM) recently conducted research on the exploitation and trafficking of children traveling from Africa and the Middle East to Europe. Among these children on the move, children traveling from Sub-Saharan Africa were four times more likely to experience trafficking than their peers traveling along the same route. What separated these children from their peers? One major factor: the color of their skin.

Stigmatization and discrimination based on race, gender, class or other identities can make children vulnerable to trafficking in a number of ways. Easily identified by traffickers, these at-risk young people may find themselves denied access to resources and safe employment. They are also socially isolated by the creation of a narrative that they are unwelcome and 'the other.'

Harmful gender norms make countless girls susceptible to trafficking. According to the International Labor Organization, approximately 70 percent of the estimated 40.3 million people subjected to modern slavery, which includes trafficking and forced marriage, are women and girls. Whether these norms prevent girls from going to school, assume that women belong in the home or doing specific types of low-paying labor, or frame women as commodities rather than human beings, stereotypes and discriminatory practices continue to place girls worldwide at a greater risk of being trafficked. These harmful social norms reinforce barriers that compromise girls' futures by excluding them from safe and legal work or perpetuating the notion that early marriage is a girl's only option for protection and social advancement.

Ten-year-old Halima's parents kept her home to work in the fields farming cocoa in Côte d'Ivoire until a UNICEF child protection program helped her family improve their harvest without relying on child labor. Now she's in school, and planning to be a teacher when she grows up. "She will be the one to teach the children of tomorrow," her father says proudly.

This is why working with stakeholders at all levels is critical in order to build societies in which trafficking cannot thrive in the first place. Community members in Côte d'Ivoire, for example, took matters into their own hands to educate local cocoa farmers about the importance of sending girls to school, rather than having them work on farms. And in Afghanistan, local religious leaders work to convince families that their daughters should not marry before the age of 18. Efforts like these are crucial pieces of the puzzle for creating a future where no child has to experience violence, abuse or exploitation.

Wondering what you can do to combat stigma? Here are some ideas:

Top photo: An eighth grader covers her face with her hands at a school in San Salvador, El Salvador. After a workshop on the misuse of the Internet and social media, she said, "I learned a lot about all the bad things that are happening on Facebook. I also realized that we, young women, are very vulnerable to all the dangers that are happening out there these days." © UNICEF/UN018674/Zehbrauska