Relief efforts face new hurdles in a country battling famine and the biggest cholera epidemic on record — heightening risks for millions of vulnerable children and families.

The death toll continues to climb in Yemen, as scores of children are lost to starvation or disease with each passing day.

The decision in early November by the Saudi-led military coalition to close all borders in response to a rebel missile strike had threatened to stall critical relief operations. The move prompted UNICEF Executive Director Anthony Lake, World Health Organization Director General Dr. Tedros Adhanom and World Food Program Executive Director David Beasley to issue a joint statement calling for the immediate reopening of all air, land and sea ports to allow medicine, food, fuel and other supplies to get through.

Without food or safe water, the threat of famine grows by the day.

"Without fuel, the vaccine cold chain, water supply systems and wastewater treatment plants will stop functioning," the UN officials warned. "Without food or safe water, the threat of famine grows by the day."

Several days later the blockade was lifted and shipments of humanitarian aid were allowed to resume into the country, including critical vaccines.

UNICEF and partners have been on the ground in Yemen since civil war broke out in March 2015. The ongoing conflict has affected more than 80 percent of the country's population, leaving nearly 21 million people in need of some form of assistance.

Response efforts include providing clean water, stopping the spread of waterborne illness and bringing therapeutic food to starving children. Some 17 million people do not know where their next meal is coming from, and 7 million are completely dependent on food assistance. An estimated 400,000 children are suffering from severe acute malnutrition, or SAM, which is life-threatening. 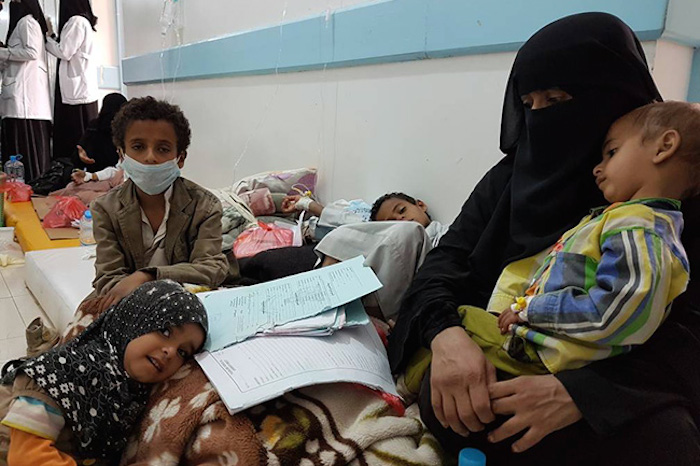 Um Taha, mother of four, camped out on the floor of a treatment center in Sana’a city for days while her children received care for symptoms of cholera. Yemen’s cholera outbreak, the worst in recorded history, is on track to top 1 million suspected cases by the end of 2017. © UNICEF/Madhok

Yemen is also battling the largest and fastest-spreading cholera outbreak in modern history. Since April, there have been 900,000 suspected cases and close to 2,200 deaths.

Cholera is preventable and treatable but particularly dangerous and difficult to stop in humanitarian crises. A highly contagious bacterial infection of the intestines, it causes severe vomiting, diarrhea and dehydration, and if left untreated, can be fatal in young children, especially those who are malnourished.

Top photo: A boy suffering from cholera has his arm measured by a health worker to determine whether he is also suffering from malnutrition at the Alsadagah Hospital in Aden, Yemen. © UNICEF/UN078075/Fuad