Sue Petrisin talks about the service organization's partnership with UNICEF, the challenges and triumphs of tackling world problems — and the power of a $1.80 vaccine.

In 2010, Kiwanis International and UNICEF united to help end maternal and neonatal tetanus (MNT), a cruel, centuries-old disease. This initiative, The Eliminate Project, protects babies and mothers all over the globe, and is committed to helping to remove the terrible shadow of MNT from pregnant women living in the 21 countries still battling the disease.

Sue Petrisin, a Michigan native who started her Kiwanis service as a Key Club member in the ‘70s, took the helm of the 100-year-old service organization last year. She is Kiwanis’ first female president, and is also associate director of the alumni association at the University of Michigan, East Lansing, where she earned a master’s degree in human resources and labor relations. Here she talks with UNICEF USA about what it takes to save and improve the lives of children worldwide.

We knew we could make a difference — with a teaspoon of salt that costs five cents.

When did Kiwanis begin working with UNICEF on children’s issues?

SUE PETRISIN: In the early 1990s, with iodine deficiency disorders (IDD). Studies showed that all over the world — including the U.S. — iodine deficiency was causing developmental delays in children. We knew we could make a difference — with a teaspoon of salt that costs five cents. We raised more than $80 million for this program and, as a result, 80 million children in 89 countries will be born free of IDD this year. This project has been hailed as one of the greatest public health achievements of the 20th century.

How did Kiwanis pull it off?

PETRISIN: Collaboration with UNICEF was the critical factor. We could work in these countries through UNICEF’s network. When we started The Eliminate Project, we hit the ground running because Kiwanis and UNICEF already had a strong partnership. We knew that, together, we could fulfill another goal. 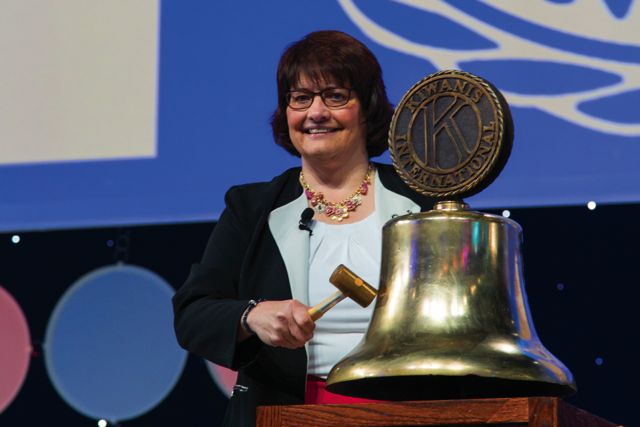 I like to say that while we speak different languages, we all speak and understand the language of service.

PETRISIN: We hear in the media that today’s young adult thinks, “It’s all about me.” But the high school and college student members of Key Club and Circle K International are dedicated to helping others. And they’re thinking about their impact on the world.

Do you see a shared sense of purpose when you visit Kiwanis clubs around the world?

PETRISIN: Yes, I do. I recently spent a week in Malaysia and a week in Japan. I’ve been to many different countries over the years, and I like to say that while we speak different languages, we all speak and understand the language of service.

Some debate whether charitable organizations should focus on helping locally or globally. Is this an either/or proposition?

PETRISIN: There is a bit of a generational split. Baby Boomers look more toward local communities; younger members push for global engagement. It reflects changing times, modern technology and greater access to information than 50–60 years ago. But despite differing perspectives, there is unity of purpose. We all want the same thing: to serve children. 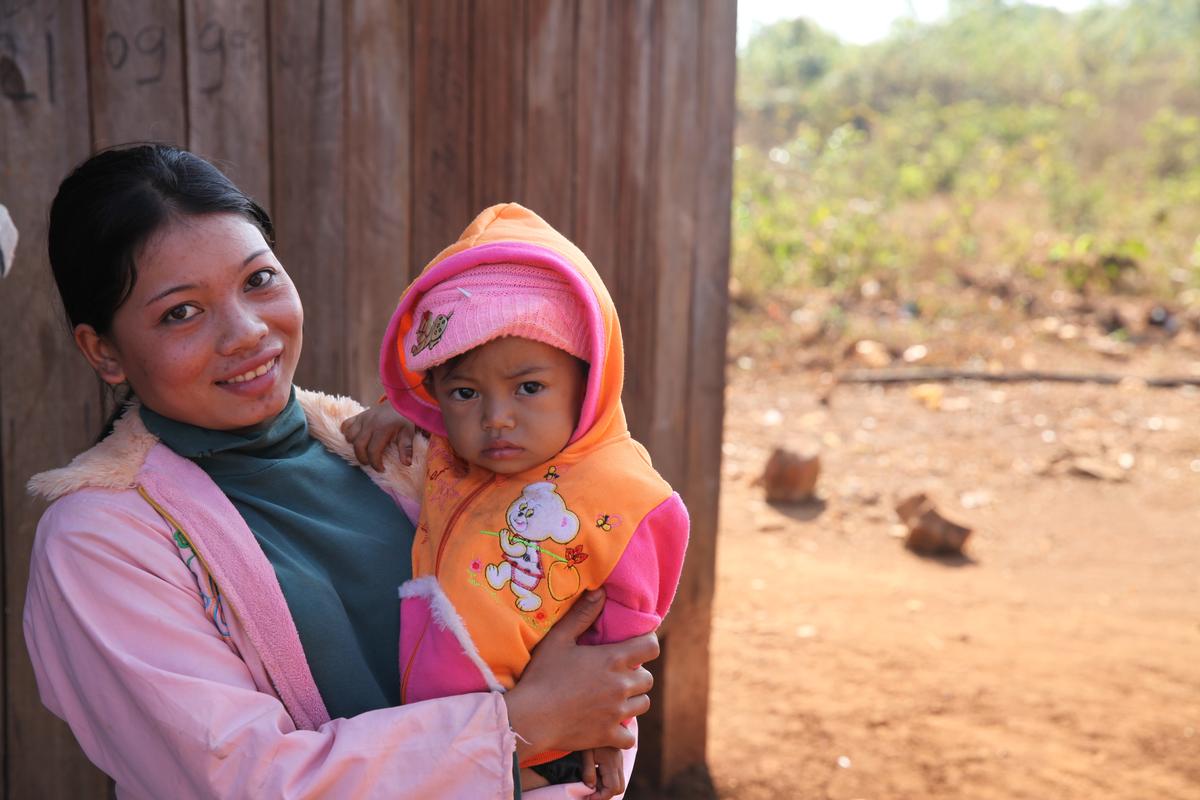 Mothers like Phalla Srey Lin, in Cambodia’s remote Mondulkiri Province with her daughter Nget Snet, receive a vaccination against MNT during pregnancy. It cost just $1.80 to administer, and immunity is passed on to newborns. © UNICEF/INDA2015/Sandler

In 100 years, Kiwanis International will continue to be an organization that isn’t afraid to tackle some of the world’s biggest problems.

PETRISIN: For us as an organization, it was the right time. With more and more women taking on leadership roles in business, politics, academia — really everywhere — it fits today. And the issues we tackle, like eliminating MNT, are maternal in nature yet supportive of children around the world.

Kiwanis just entered its 101st year. What do you think Kiwanis will be doing 100 years from now? 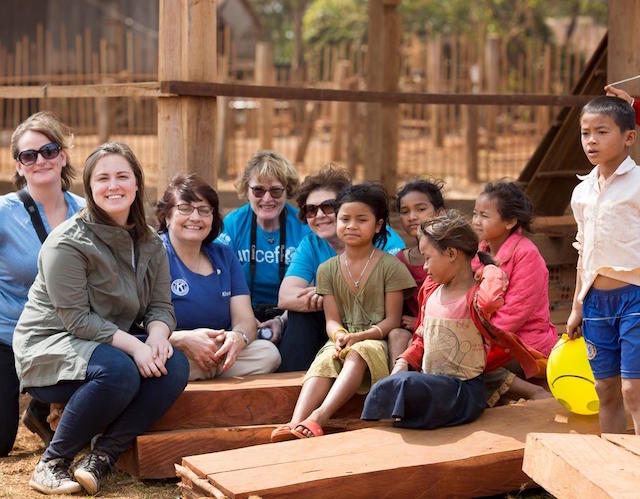 Sue Petrisin drawing with children during a UNICEF field visit in Cambodia, which was declared MNT-free last September.

You went to Cambodia, which just eliminated MNT. What did you gain from the trip?

PETRISIN: A deeper personal connection to what UNICEF and Kiwanis are doing. It was incredibly rewarding to be in a country where Kiwanis has had impact. It was humbling to spend time in villages  with no electricity or plumbing, things we take for granted in the West. I asked mothers what they wished for their children. They all said the same thing: they want their children to live.

How do we help mothers like those you met?

PETRISIN: A tetanus vaccine costs  $1.80 — that's all it takes to protect a woman and all her future children from contracting the painful, deadly disease. Since the inception of the Kiwanis International-UNICEF partnership, 19 countries have eliminated the disease, but there are 21 more to go — 21 countries where children are still at risk. And we are going to keep going. 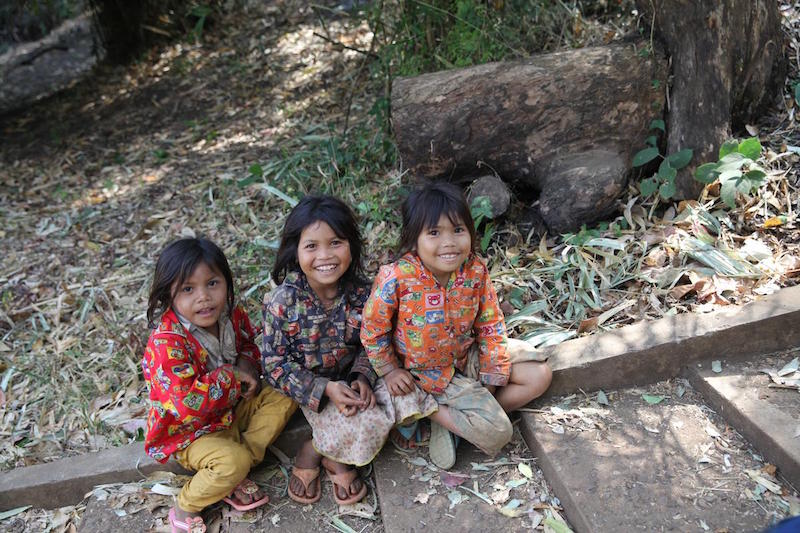 In Cambodia, families can rest easy, knowing that pregnant women and babies are being protected from the terrible disease of MNT.