The Climate Crisis Is a Child Rights Crisis

With global warming threatening to render the Maldives uninhabitable by 2050, 77 percent of young people are worried about climate change.

When people think of the Maldives, images of idyllic white-sand beaches, turquoise waters and coral reefs teeming with colorful fish come to mind.

But if we cannot limit global warming to 2°C, this island paradise may become uninhabitable as early as 2050 — and disappear entirely by the end of the century.

The Maldives has the lowest terrain of any country in the world. Erosion of the shoreline is already a severe issue in many islands. Many schools and health centers — critical infrastructure so many children and families depend upon — sit within only 328 feet of shorelines. With sea levels rising 3 to 4 millimeters per year, it is only a matter of time before these schools and health centers are destroyed.

Saltwater is encroaching into the Maldives' few small pockets of underground fresh water. Water and vector-borne diseases, such as dengue fever — which can be fatal for children — are on the rise.

Already today, young people in Maldives tell us that climate change directly affects their education, including their journey to school. Children who take boats to attend school on other islands are the most exposed. Atolls face extreme weather events, storms and strong winds. Flood damage in schools is increasingly common, and roads leading to schools may be washed away entirely.

The impact on children’s health is no less dramatic. While surrounded by seawater, Maldives faces severe freshwater scarcity, with some islands even requiring desalinated water to be shipped in by boat. As sea levels rise, saltwater is encroaching into the country’s few small pockets of underground fresh water. Meanwhile, water and vector-borne diseases, such as dengue fever — which can be fatal for children — are on the rise. 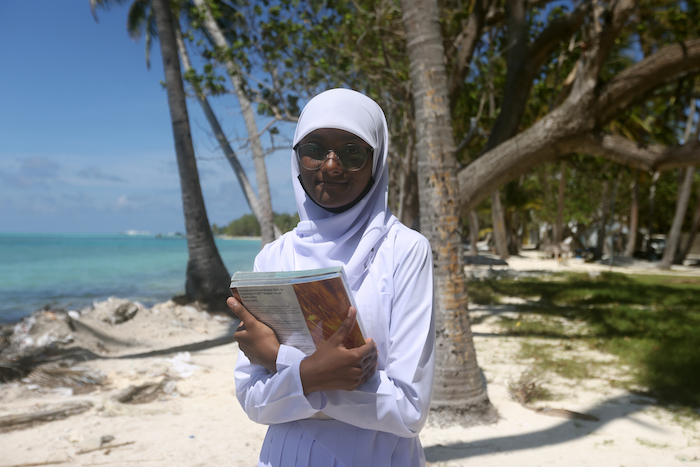 Fathimath, 15, has seen the beach in front of her school in Dhiffushi, Maldives, shrink due to severe erosion from rising sea levels. Because the school is now only within 100 feet of the water, the school courtyard and adjacent roads flood regularly. “When there are floods, we take our shoes and socks off and put them in our school bags,” she says. “And we wade through the water to our classrooms.” © UNICEF/UN0543151//Faheem

When there are floods, we take our shoes and socks off and put them in our school bags. We wade through the water to our classrooms — Fathimath, 15

With these multiple threats, it’s no surprise that 77 percent of young people in Maldives are worried about climate change. For many of them, the climate crisis is an existential threat. During their lifetimes, they may have to make the heart-wrenching decision to leave their beloved island and move to higher ground, to a place that is not at constant risk of flooding, to a place with enough fresh water and food for themselves and their families — to a place, potentially, in another country.

Maldives has shown strong leadership, setting ambitious goals such as phasing out single-use plastics by 2023 and ensuring water security for all islands by 2023. It has also committed to net zero emissions by 2030. The Government also actively involves young people in climate negotiations, placing them at the heart of the agenda.

However, to protect the futures of children in Maldives and other small island nations, action at the national level will not suffice. The Maldives contributes only 0.003 percent to global greenhouse gas emissions, but is paying for the global climate crisis with its very existence. It is only through global action that the bleak outlook for children living on low-lying islands can be reversed. 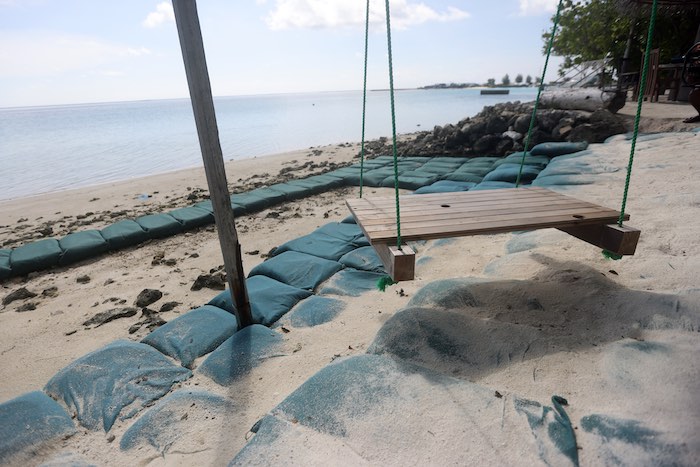 Sandbags line a beach on Dhiffushi to protect Maldives' coast from rising sea levels. The world's lowest-lying nation is expected to be entirely submerged by 2100 if global warming can't be reversed. © UNICEF/UN0543193/Faheem

As we look ahead, countries worldwide must uphold commitments to reduce greenhouse gas emissions to prevent future sea-level rises. We must also provide children with climate education and teach them the critical green and blue skills to prepare them for their future work to improve sustainability practices and reduce emissions at the individual, institutional and communal levels. We must also increase climate finance for Maldives, focusing on adaptations to ensure schools and health centers are climate-proofed and vulnerable shorelines protected.

Finally, it is time to recognize the climate crisis as a child rights crisis. We must place children and young people, especially girls, at the heart of the climate agenda. We must work with them as agents of change and undertake climate action in a way that ensures every child, everywhere — including those living on a low-lying atoll — can benefit from health care, education, nutritious meals and clean water.

Top photo: Ahmed, 9, whose school in Dhiffushi, Maldives, regularly floods due to rising sea levels says, "Even if the school gets flooded, I still want to go.”  © UNICEF/UN0543161/Faheem