A resurgence of cholera in Haiti —after three years without a single reported case — is threatening the health and well-being of 1.2 million children in and around Port-au-Prince, UNICEF warned as it joined other UN agencies in support of an emergency response.

Nearly 100,000 children under age 5 who are already suffering from severe acute malnutrition — also known as severe wasting — are especially vulnerable.

Since the first cholera cases were reported on Oct. 2, there have been 357 suspected cases — more than half in children under age 14, UNICEF reported. Cholera, an acute diarrheal infection contracted by ingesting contaminated food or water, is most dangerous in children ages 1 to 4, especially those already weak from malnutrition.

Containing the outbreak is complicated by a surge in gang violence and a fuel crisis. Basic health, water and sanitation and other key services have become severely restricted in the capital and surrounding areas. Gangs have blocked access to a key port, preventing essential supplies from getting through.

“With the rising violence and insecurity, many of the poorest Haitian families have no option but to drink and use unsafe water,” said Bruno Maes, UNICEF Representative in Haiti. “Families are unable to buy soap to wash their hands, garbage is not collected in the streets, hospitals are closed or unable to operate. All these ingredients have turned Haiti into a time bomb for cholera. Now it has exploded.”

Cholera, a preventable and treatable illness, can be deadly when combined with malnutrition. With food insecurity on the rise, malnutrition risks have increased, particularly in Cité Soleil, an impoverished, densely populated community within the Port-au-Prince metropolitan area, where the first cholera cases were confirmed. UNICEF warned that up to 8,000 children under 5 in Cité Soleil were at risk of dying of concurrent malnutrition and cholera unless urgent action is taken to contain the threat.

"For children who are already weak from a lack of nutritious food, catching cholera, and suffering the effects, including diarrhea and vomiting, is close to a death sentence," Maes said. 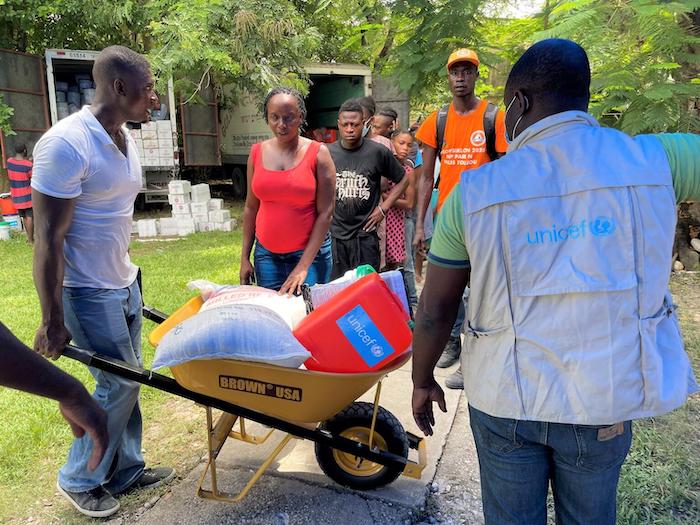 Community members pitch in to help transport hygiene kits from UNICEF in Les Cayes, one of many areas of Haiti where poor access to safe water, sanitation and hygiene increases health risks for children.© UNICEF/UN0511633/Crickx

To contain malnutrition during the cholera upsurge, UNICEF, Haiti's Ministry of Health and other partners are actively screening to identify wasting among 40,000 children under 5 and expedite referrals of wasting cases for treatment at UNICEF-supported mobile clinics or the nearest health facility. UNICEF is also supplying Ready-to-Use Therapeutic Food, therapeutic milk and other supplies needed for treatment.

“Time is against us, as cholera spreads rapidly and there is a risk of the outbreak growing out of control,” Maes said.

Time is against us, as cholera spreads rapidly and there is a risk of the outbreak growing out of control. — Bruno Maes, UNICEF Representative in Haiti

UNICEF has ongoing programs in Haiti that focus on training community health workers to promote infant and young child feeding practices and teaching households cholera prevention practices at the community and household level.

UNICEF is supporting the government's cholera response in other ways as well: by providing water purification tablets, soap and water tanks and storage bladders for distribution to affected areas and by supplying chlorine to support plans to treat the Port-au-Prince water supply, disinfect households and equip health centers.

"[O]ur most urgent concern is not only to buy and deliver safe water, chlorine and soap," Maes said, "but to find ways to reach the poorest families in the areas controlled by the gangs.”

Another risk for children in Haiti amid rising violence and insecurity: loss of education

Violence and widespread social unrest in Haiti has also jeopardized the start of a new academic year for 2.4 million children. Gangs have attacked, looted or seized control of many schools in Port-au-Prince. Many remain closed to students.

UNICEF's humanitarian action plan in Haiti for 2022 prioritizes improving access to safe water — which is essential for preventing disease as well as child malnutrition — and supporting the country's ongoing recovery from the 2021 earthquake, which devastated Haiti's southwest region. That plan remains critically underfunded.

Top photo: A student attends class in Haiti with UNICEF-provided school supplies on hand. UNICEF is concerned about children's ability to attend school due to rising gang violence in the Greater Port-au-Prince area and a cholera outbreak, the country's first in three years. © UNICEF/UN0717600/