With UNICEF Kid Power, Kids Save Lives While They Get Strong | UNICEF USA

With UNICEF Kid Power, Kids Save Lives While They Get Strong

At a New York City school, students are getting more active knowing that every step, skip and jump can help save kids’ lives.

On a visit to a park down the street from their New York City elementary school, P.S. 42, members of Patty Ng’s second grade class challenge each other to a running race. With arms pumping and legs flying, they sprint from one side of the park’s playground to the other and back again. After arriving at the finish line and taking stock of who came in first (and second and third) the students quickly check the blue Kid Power Bands on their wrists to see how many steps they earned. 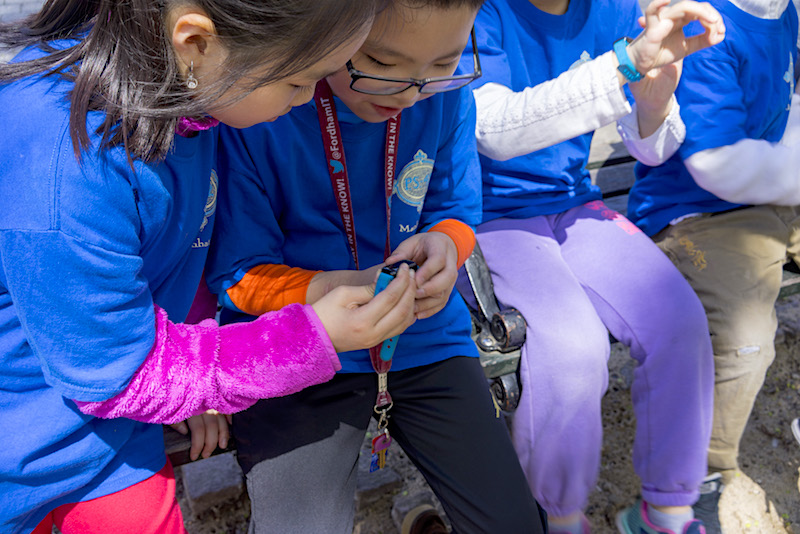 Students in Ms. Ng's second grade class at P.S. 42 in New York City check their Kid Power Bands to see how many steps they have earned so far that day. © UNICEF USA/Kye Ehrilich

Eight-year-old Randy Li says, “When you run, you get super strong!” But the real beauty of the UNICEF Kid Power program is that kids are not only getting stronger — they are helping other kids around the world just by moving their bodies.

Fighting famine around the world just by moving their bodies

As kids run, jump and play, their movements are measured by their Kid Power Bands. The more they move, the more points they earn to unlock funding from partners, parents and fans, which UNICEF uses to deliver lifesaving packets of Ready-to-Use Therapeutic Food (RUTF) to severely malnourished children around the world.

UNICEF, the largest global procurer of RUTF, uses this “miracle food” to help the estimated 16 million kids who are suffering from acute and severe acute malnutrition worldwide each year.

Anyone can purchase a UNICEF Kid Power Band, but the teacher-led school program comes with Kid Power Bands for each student plus a host of standards-aligned lessons and activities. Teachers like Ms. Ng, who is new to the program this year, apply for the school program in the fall. Priority is given to third-, fourth- and fifth-grade classes, with some availability for students in sixth, seventh and eighth grade. Preference is also given to schools in which at least 60 percent of students are eligible for free or reduced-cost meals. 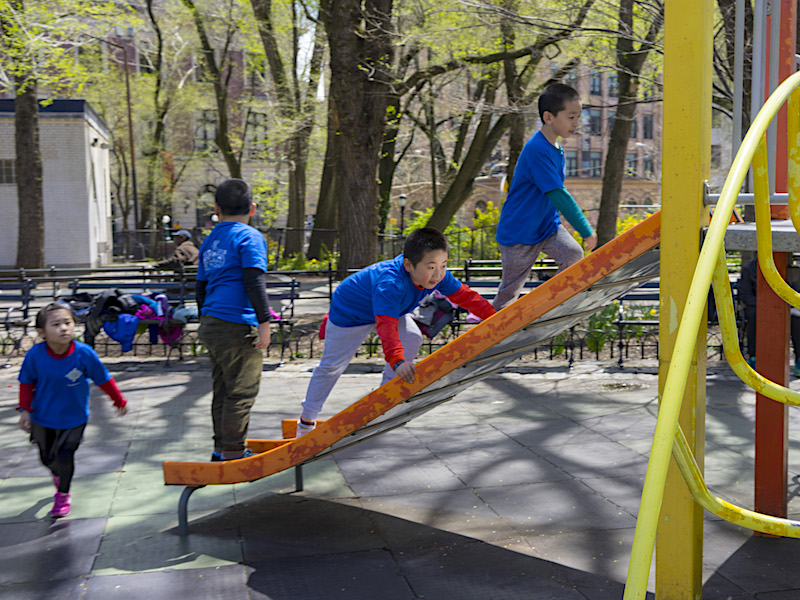 “Our kids love it,” says Ms. Ng. “They say, ‘We’re going to exercise and unlock RUTF packets for other kids — so we are helping them every night!’”

Student Yingda, who is a member of Grace Law’s third grade class, agrees. “I feel really proud that I’m helping kids all around the world,” he says.

Opening up the world through the Kid Power curriculum

Thanks to the Kid Power curriculum, which includes activities and videos, students get a window into what life can be like for the world’s most vulnerable children.

“When I show UNICEF videos to the kids, some are shocked that so many kids around the world are malnourished,” says Ms. Law, who grew up in new York City's Chinatown and was once a student in the very classroom where she now teaches. “A lot of the kids in Chinatown don’t get much exposure to the world,” Ms. Law says. “[Kid Power] opens up the world a bit more for them.”

P.S. 42 is not your average elementary school. Many of the students are first-generation immigrants who are learning English as a second language. But kids’ excitement sounds the same in any language, so it’s abundantly clear how these students feel when Ms. Law announces it’s time for a “brain break” and cues up a Kid Power Up video on the classroom Smart Board. 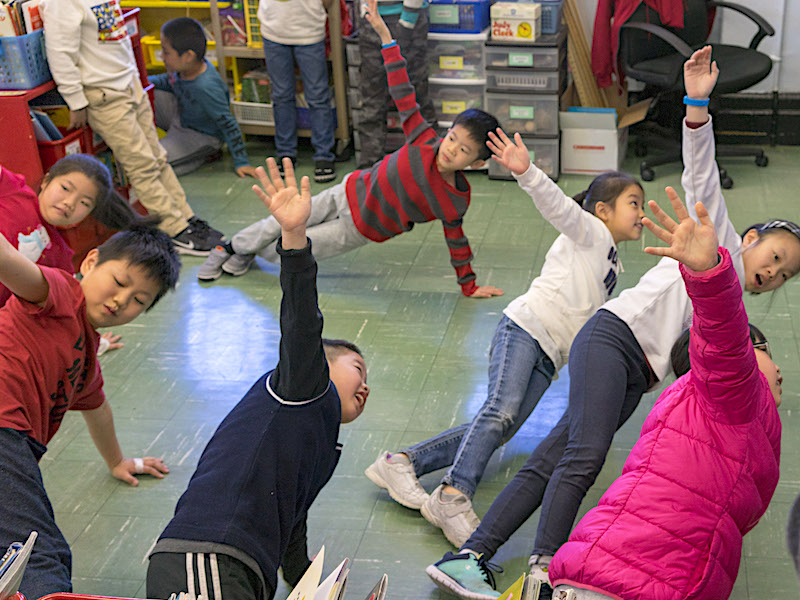 Students in Ms. Law's class at P.S. 42 take a "brain break" by doing a Kid Power Up. © UNICEF USA/Kye Ehrilich

New to the UNICEF Kid Power curriculum this year, Kid Power Ups are interactive, age-appropriate dance and music videos designed to give kids brief, energizing movement breaks during the school day. Ms. Law’s students laugh and cheer as they dance, jump and try to keep their balance while showing off impressive side plank poses.

“When I put on a Kid Power Up and I see the whole class moving together, it brings a little joy, seeing that unity,” says Ms. Law, noting that the Kid Power Ups are especially helpful for her students who are learning in their second language. “It’s very taxing for them to have to sit and read for long periods of time. After a Kid Power Up, they liven up, and it gives them a bit more energy to continue with the next part of the day.”

Another great thing about Kid Power Ups is that they give kids a way to save lives even if they don’t have a Kid Power Band — or remember to wear it to school that day. Each time a class (or group) completes 10 Kid Power Up videos, they unlock one packet of RUTF.

Learning to help solve problems in their own community

With helping malnourished kids now very much a part of their daily lives, the students at P.S. 42 see that they have what it takes to solve problems in their own community.

“They do notice problems around Chinatown,” says Ms. Law, who worked with her students on a food drive this year to help the homeless. “Our class collected cans of food. The kids counted them and boxed them.”

According to both teachers, the impact that the students are having around the world and in Chinatown has inspired them to look for ways they can help by being kind.

“They are learning to help one another to translate, and by being community helpers in our school,” says Ms. Law. “They are even helping at home, translating for their parents. They are always happy to share.”

That generosity has given the students, many of whom are working hard to learn in two languages, something else to be proud of. 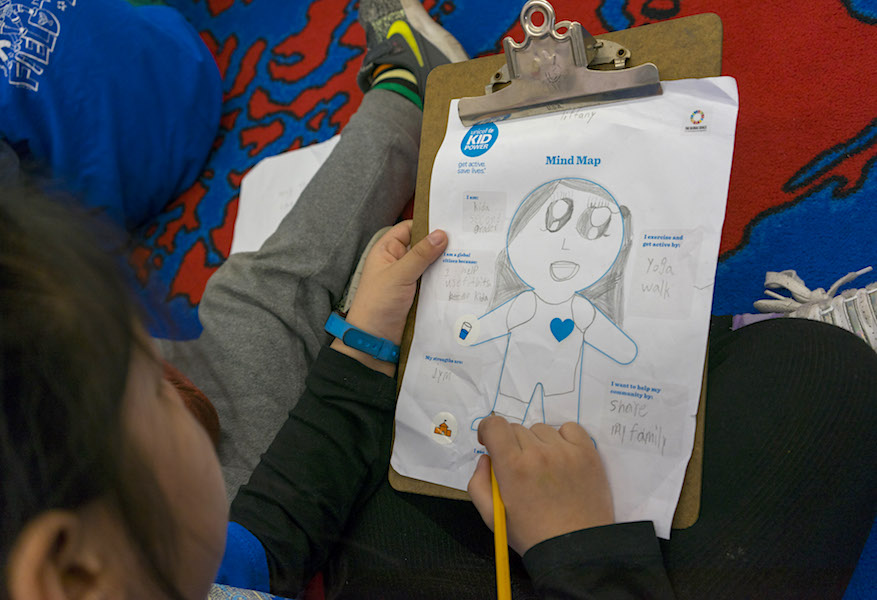 Students in Ms. Ng's class use a UNICEF Kid Power Mind Map to write about how they are being helpers in their own community. © UNICEF USA/Kye Ehrilich

After their trip to the park, Ms. Ng’s class gathers on the rug for a discussion about what it means to be global helpers.

One by one, the children answer, “running,” “singing,” “speaking in Chinese and English,” before Ms. Ng, calls upon a little boy who seems hesitant to join in.

“I give people food.”

If you are a teacher who is interested in participating in next year's UNICEF Kid Power Schools program, sign up here to be the first to hear about opportunities to bring UNICEF Kid Power to your classroom or group.