For Pride Month, UNICEF USA issues an important reminder that all children deserve protection and equal rights — and renews its longstanding commitment to ending discrimination and abuse.

It was on May 17, 1990, that the World Health Organization declassified homosexuality as a mental disorder.

That decision marked a significant turning point in the already decades-long fight to end violence and discrimination against lesbian, gay, bisexual, transgender and intersex (LGBTI) men, women and children.

That fight is far from over. A 15-year-old boy from the Chamelecón suburb of San Pedro Sula in Cortes, Honduras, peers out a window at a UNICEF-supported facility for children and young people affected by gang violence. The center provides a safe place for children to continue with their schooling and socialize safely with friends. Violent beatings and death threats have forced many young people to drop out of school. Some have fled north, many without their parents. LBGTI kids face an even greater risk of harm — whether they stay or go. ©UNICEF/UN076711/Amaya

Research — including UNICEF's own reports from the field — shows LGBTI children are particularly vulnerable to threats to their safety and well-being. The studies indicate that they are more likely to be the target of violent attacks; more likely to be bullied at school, or otherwise harrassed, stigmatized and socially excluded; and more likely to be isolated and abandoned by parents and peers. LGBTI youth who are rejected by their families experience disproportionate levels of suicide, homelessness and food insecurity.

In some countries, 85% of LGBTI students experience homophobic and transphobic violence at school, while 45% of transgender students drop out.

In some countries, 85% of LGBTI students experience homophobic and transphobic violence at school, while 45% of transgender students drop out, according to a 2016 UNESCO report, Out in the Open: Education sector responses to violence based on sexual orientation and gender identity/expression.

Children on the move — uprooted by poverty, conflict, or other threats of violence at home — are at grave risk of being apprehended, kidnapped, raped or murdered, and for LGBTI youth, the risks are even graver. The rampant gang violence that has forced so many to flee from countries like El Salvador, Guatemala and Honduras in recent years often targets LGBTI youth specifically, the organization Kids in Need of Defense (KIND) reports. "Our research found that sexual and gender-based violence by gangs causes many children, especially girls and LGBT children and youth, to flee Central America and seek safety in the U.S.," Rachel Dotson, KIND's director of gender and child migration initiatives, told NBC News. 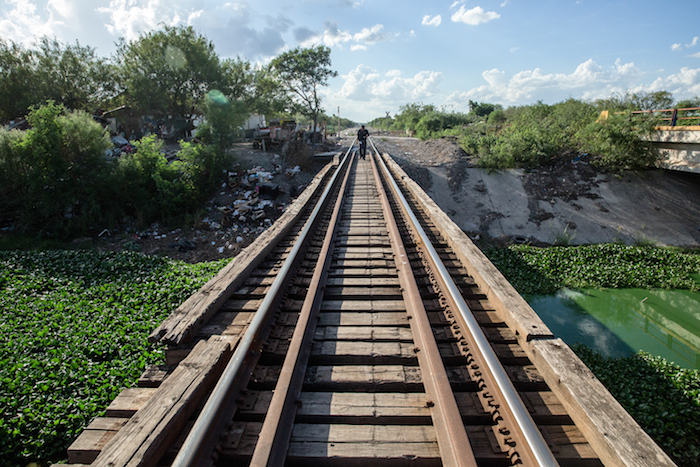 Train tracks on the outskirts of Reynosa, Mexico. Child migrants and refugees from Central America traveling through Mexico toward the U.S. border hoping for asylum risk being apprehended, kidnapped, beaten and even murdered along the way — but choose to make the journey anyway, because of the gang violence, crushing poverty and other dangerous conditions at home. The risks of harm are even higher for LBGTI kids, who are targeted because of their sexual orientation or gender identity. ©UNICEF/UN030740/Zehbrauskas

UNICEF and other signatories to a September 2015 Joint Statement on the issue LGBTI rights calls on states to recognize that the persecution of individuals who are — or who are perceived to be — LGBTI may constitute valid grounds for asylum, and that refugees should not be forced to return to a place where their lives or freedoms might be threatened.

UNICEF works to provide education and basic services to the world's most vulnerable children. As part of that mandate, UNICEF dedicates substantial resources to protection programs and services wherever children's rights are endangered, working with governments and other partners and advocating for laws and policies that secure and safeguard those rights at home, in schools and in communities. UNICEF also supports efforts to repeal discriminatory laws and to reverse social norms and practices that further marginalize children based on real or perceived sexual orientation or gender identity.

All children — irrespective of who they are or where they are from — have the right to a happy and healthy childhood, free from discrimination and safe from harm.

This work is rooted in the belief that all children — irrespective of who they are or where they are from — have a right to a happy and healthy childhood, free from discrimination and safe from harm. And everyone has a role to play in protecting those rights: UNICEF and other UN organizations, governments, community and religious leaders, the private sector, health care providers and civil society.

UNICEF USA stands with those working to end all forms of violence and discrimination against LGBTI children and youth, and supports UNICEF's continued efforts to strengthen protections for vulnerable children around the world.