After four years of armed conflict in South Sudan, the young nation's supply of safe drinking water has been severely disrupted. Water points have been damaged or fallen into disrepair. Nationwide, only 41 percent of children have safe, clean water to drink. Unsafe water puts people, especially children, at increased risk of waterborne diseases such as diarrhea and cholera. In Bentiu, UNICEF and partners rehabilitated the water treatment plant with the support of USAID, piping safe water all over town. 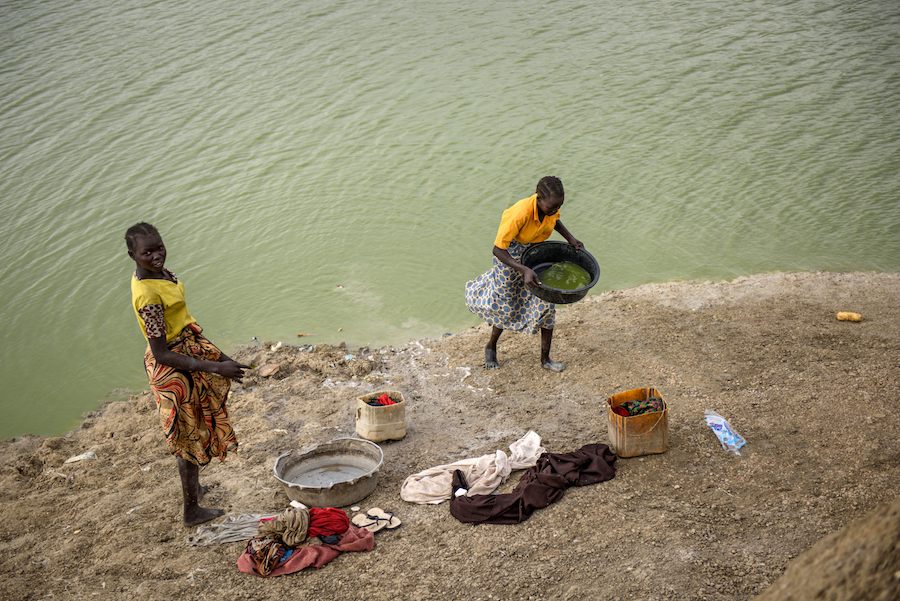 Girls collect water from an artificial lake to wash clothes in the Protection of Civilians (PoC) site in April 2017. Clean water is provided at the PoC site, but many use untreated water from the artificial lake for tasks such as washing. © UNICEF/UN068324/Hatcher-Moore More than 114,000 people are seeking safety in the PoC site. The backbreaking task of fetching water often falls to girls. © UNICEF/UN068318/Hatcher-Moore The water treatment plant, which resumed operations in June 2017 after a yearlong rehabilitation, produces 500,000 liters per day of safe drinking water. The water is pumped through a six kilometer-long pipeline network with 22 distribution points near markets, schools and health facilities in densely populated areas. © UNICEF/UN075401/Kealey 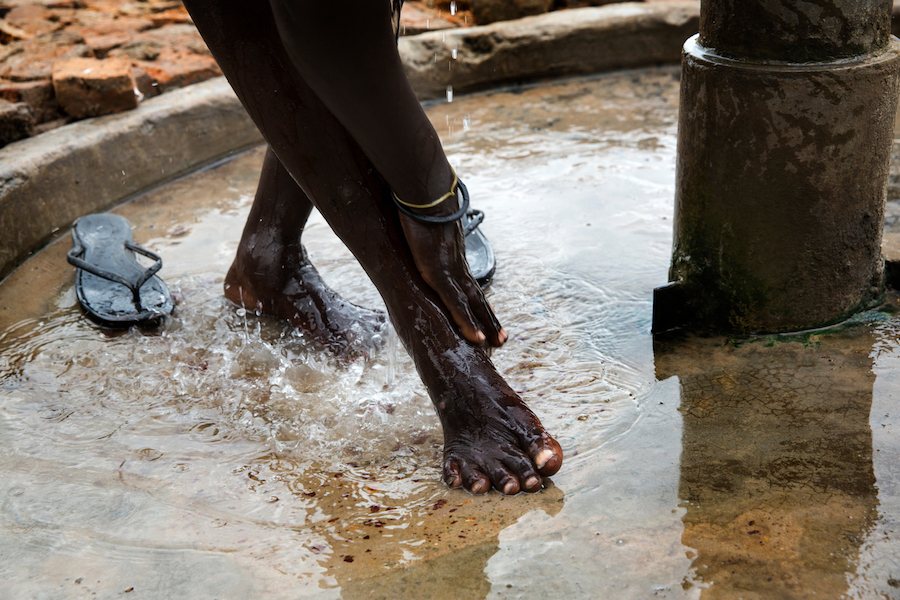 A woman washes with water piped from the treatment plant to a pump at the Machakos Primary School in Bentiu in July 2017. Women and girls from the area come to the pump daily to collect safe drinking water for their families and to wash. © UNICEF/UN075400/Kealey 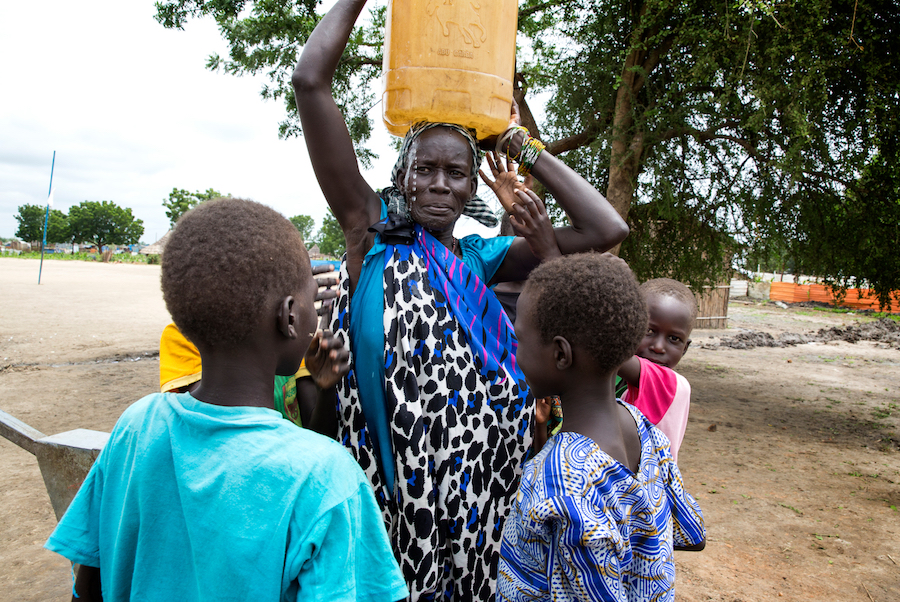 Before the treatment plant resumed operations and pumped water to the Machakos Primary School, Angelina (above, center) walked to a river two hours away to fetch water. Once she narrowly avoided a crocodile, only to be bitten by a snake. "The area bitten by the snake still gets swollen, even though it's mainly healed," says the mother of six. © UNICEF/UN075396/Kealey 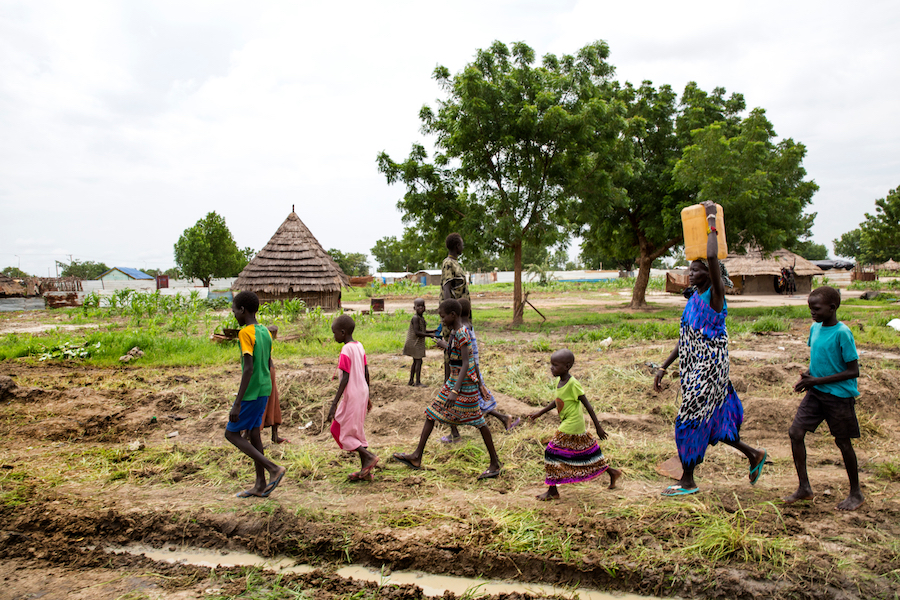 The rehabilitated pump at the school means families now have safe water close to their homes. For Angelina, who makes her living selling firewood, this is a big improvement. "The water we get from the school here, I use it to prepare food for my kids and do other things at home," she says. "We are all happy." © UNICEF/UN075394/Kealey 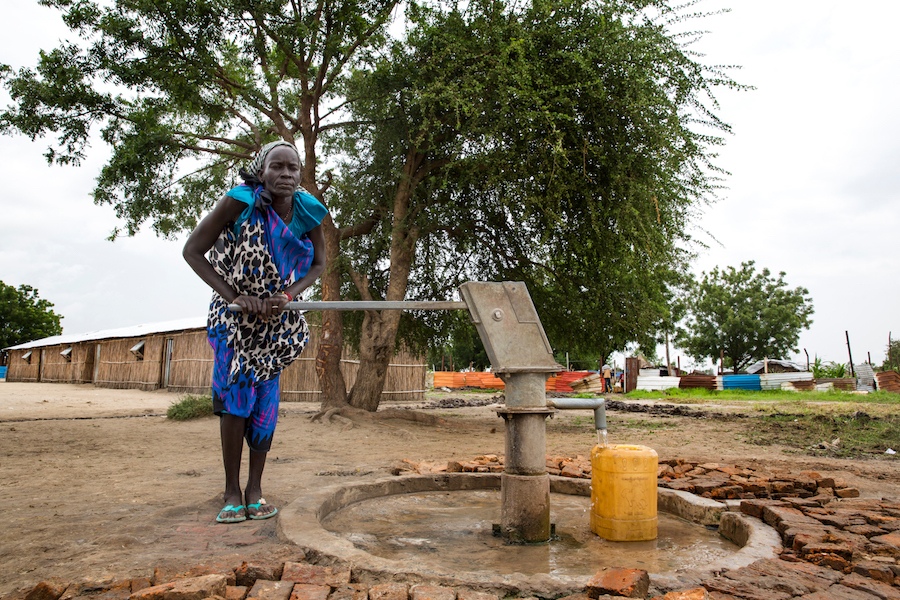 Access to safe drinking water means Angelina and her children, and others in the community, won't be sickened by waterborne disease. © UNICEF/UN075399/Kealey 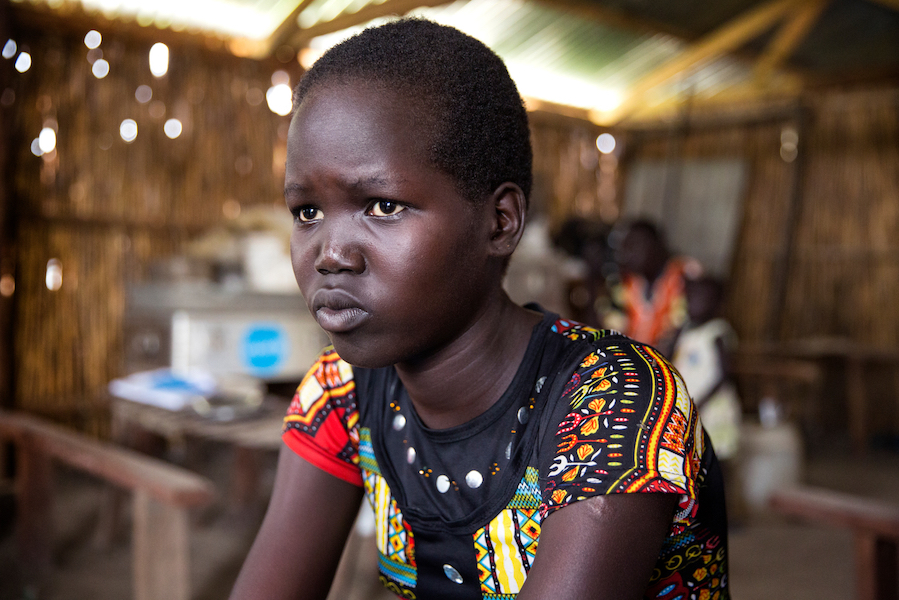 Mary, 15, and her entire family fell ill with diarrhea. They all recovered except her younger sister, Nyakuth, 13, who passed away. Mary was devastated by the loss of her sister to a waterborne disease. “I’m feeling so sad about what happened," she says. "It was all because of the dirty water. If the clean water was there, then she might not have become sick and passed away. We trusted each other all the time and we loved each other.”  © UNICEF/UN075402/Kealey Nyahok lives with her children in the Kochthey internally displaced persons camp in Bentiu. She relies on a tricycle for mobility. Before a pipeline bringing safe drinking water from the treatment plant to the camp was constructed, Nyahok would travel up to two hours a day on her tricycle to collect water. © UNICEF/UN075391/Kealey 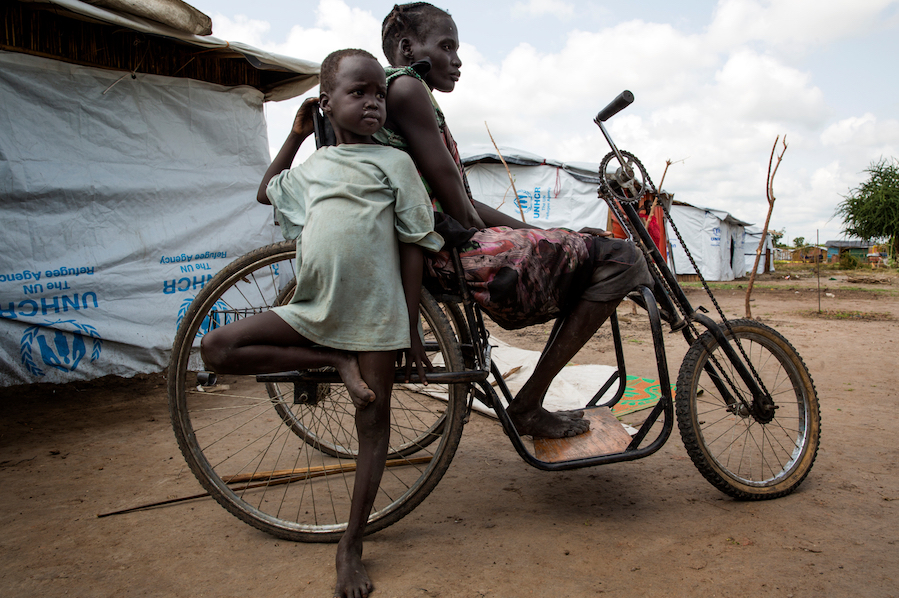 "Sometimes during the rainy season, it was too muddy. I couldn't move with my bike and I was stuck in my house," says Nyahok. Now it takes Nyahok five minutes to collect water with the help of her children, meaning she can make the journey several times a day with ease. © UNICEF/UN075395/Kealey

In South Sudan, 5.1 million people live without safe water, adequate sanitation or hygiene. For the residents of Bentiu, the rehabilitated water treatment plant and pipeline has been life-changing. To date, over 262,205 people across four PoC sites in Bentiu, Bor, Juba and Wau, as well as internally displaced sites such as Mingkaman, are benefitting from ongoing water supply services with UNICEF support.

Top photo: A young girl washes her siblings in the shell of a damaged suitcase in the Protection of Civilians (PoC) site in Bentiu, South Sudan in May 2017. © UNICEF/UN070635/Hatcher-Moore