To Improve Nutrition for Children, a Little Sprinkle Goes a Long Way

Micronutrients in powdered form have long been an important part of UNICEF's global strategy to improve nutrition for vulnerable children. Here's how they're used to help fight hidden hunger.

Half of the world's children under age 5 are suffering from what is often called hidden hunger — meaning they are not consuming a sufficient variety of foods to ensure healthy growth and development. Their diets lack certain essential nutrients that are the building blocks of healthy brains, bones and bodies.

When children aren't getting enough vitamins or minerals, they are more likely to become sick from ordinary infections. Cognitive development is delayed. The damage from a micronutrient deficiency happens gradually, and so can be difficult to detect until it is too late. It must be remedied early. 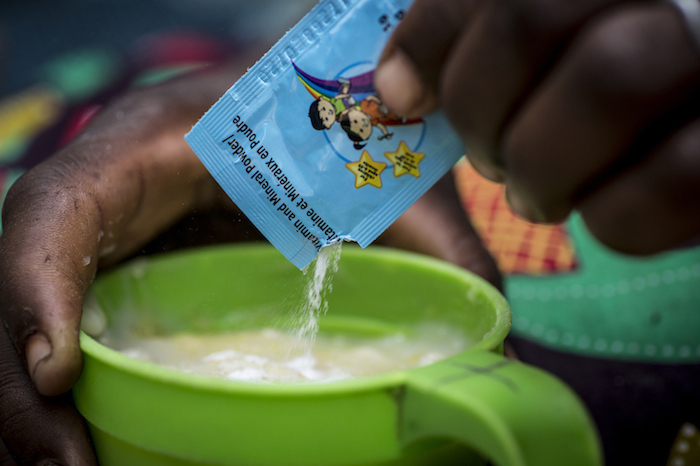 A packet's worth of micronutrient powders (MNP) is sprinkled into a serving of porridge — an easy way to fortify a child’s diet and prevent stunting and other long-term effects of malnutrition. UNICEF is the world's largest provider of MNPs, supporting home fortification programs that benefited 15.6 million children in 2018, up from 4 million in 2014. © UNICEF/UN0342483/Keïta

One way UNICEF works to address this issue in vulnerable children is by providing micronutrient powders (MNPs) — an easy way for parents to fortify their children's meals at home. Each packet contains a sprinkling of 10 vitamins and five minerals, including Vitamin A, C and B12, plus folic acid, iron, zinc and iodine — all essential nutrients that kids need to grow up healthy.

UNICEF is the largest provider of MNPs in the world, procuring 197 million packets in 2018 to support nutrition programs reaching 15.6 million children.

The powders are often integrated into broader strategies that include counseling families on better feeding practices. In the Sikassa region of Mali, for example, MNPs are part of a new food fortification program aimed at reducing anemia, or iron deficiency, which reduces a child's ability to learn. Rwanda recently became the first African country to achieve national coverage of its home fortification program with UNICEF's support. 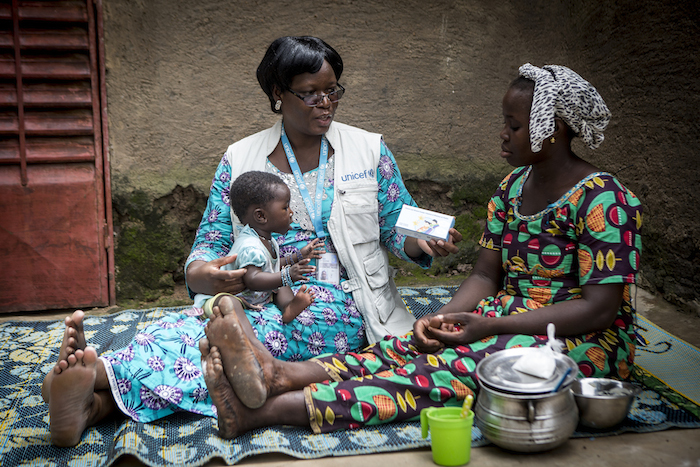 Marietta Mounkoro, a nutrition officer based at the UNICEF field office in Sikasso, Mali, visits with a family in Zebala village. With 6-month-old Chatou in her lap, she discusses with Chatou's mother how micronutrient powders can be used to fortify her baby's food and avoid dietary deficiencies that cause long-term harm. Stunting is a common problem in Sikasso. © UNICEF/UN0342181/Keïta

One of the most cost-effective tools in the nutrition toolbox, MNPs are also often among the first items UNICEF's Supply division prepositions ahead of a storm or other natural disaster where an emergency response is imminent. Stored at room temperature and with a shelf life of two to three years, MNPs are easy to distribute and dispense: open, sprinkle and stir.

MNPs are just one way to tackle malnutrition in children. For severe, acute cases, there is Ready-to-Use Therapeutic Food, a protein-rich peanut paste known as the "miracle food" for its ability to bring children back from the brink of starvation. UNICEF is also a strong advocate of early and exclusive breastfeeding to give babies their best start in life. A child in Ulaanbaatar, Mongolia, is given porridge mixed with micronutrient powders to ensure proper nourishment, which prevents stunting and cognitive delays. © UNICEF/UN0316934/Pasqualli

As noted in the 2019 edition of UNICEF's annual State of the World's Children report, the greatest burden of all forms of malnutrition is shouldered by children and young people from the poorest and most marginalized communities, perpetuating poverty across generations. Children, Food and Nutrition: Growing well in a changing world, offers a deep dive into UNICEF's latest thinking around how to reduce malnutrition in all forms.

For over 70 years, UNICEF has been putting children first, working to protect their rights and provide the assistance and services they need to survive and thrive. Help UNICEF continue to improve nutrition for children.

Top photo: Two-year-old Alimatou, who lives in the Sikassa region of Mali, holds a box of micronutrient powders that her mother uses to fortify her meals with essential vitamins and minerals. The MNPs are provided through a UNICEF-supported program that includes enlisting local mothers to help promote better feeding practices and reduce malnutrition in children. © UNICEF/UN0342204/Keïta