Hurricane Dorian Devastates the Bahamas and Bears Down on the U.S.

Communities are reeling in the aftermath of the storm, and those still in its path are bracing themselves for powerful winds and heavy rains. UNICEF is there to help families, as needed.

Hurricane Dorian, the strongest hurricane in Bahamas history, made landfall in the Bahamas on September 1, flooding neighborhoods, destroying homes and killing at least 30 people, with hundreds if not thousands missing. The toll is expected to rise significantly in the coming days.

In the meantime, UNICEF teams are working with the government and other United Nations agencies to ease the devastating impact on the tens of thousands of children and families whose homes and communities have been leveled. UNICEF water and sanitation experts along with emergency and child protection specialists are now on the ground in the Bahamas, assessing the needs and planning the response. According to the UN, an estimated 75,000 people urgently need food, water and shelter.

After grazing the Florida coast as a Category 2 storm with 105 mph winds, Dorian also made landfall in Hatteras, North Carolina, with 90 mph maximum sustained winds.  As rain, wind and storm surges buffeted the Carolinas, coastal communities all the way up to southeast Massachusetts prepared for torrential rain, life-threatening flash floods and high winds in the days ahead, according to the National Hurricane Center.

UNICEF USA has been in communication with local state Governments as well as partners on the ground to prepare for a potential response, if needed. Residents who may be in Dorian's path should monitor the storm's progress carefully and take immediate, appropriate precautions. 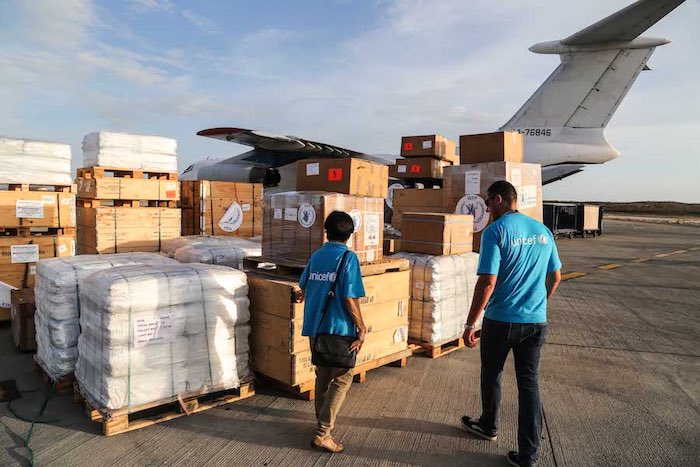 As with our successful partnerships — with the City of Houston following Hurricane Harvey and in Puerto Rico after Hurricane Maria — UNICEF USA and local partners are standing ready to provide aid and comfort to meet UNICEF's core priorities: health, education, child protection and psychosocial support.

With the world's largest humanitarian warehouse in Copenhagen, UNICEF can deploy supplies anywhere in the world in 48 to 72 hours to provide children with the clean, safe water, nutrition and protection they so desperately need when disaster strikes.

Please support UNICEF in getting emergency relief to those most in need all across the globe.

Top photo: An aerial view of damage caused by Hurricane Dorian is seen in Marsh Harbour on Great Abaco Island on September 4, 2019 in Great Abaco, Bahamas. A massive rescue effort is underway after Hurricane Dorian spent more than a day inching over the Bahamas, killing at least 20 and flattening entire communities. Photo by Scott Olson/Getty Images