Thousands of children and families are at risk from flooding and landslides. UNICEF is on the ground providing urgently needed assistance.

Relentless rain pours down in Cox's Bazar, Bangladesh as barefoot boys wade through knee-deep muddy water past bamboo shelters in varying states of collapse. A mother uses a plastic pot to catch rainwater from a leaky, tarp-covered roof and pours it onto clothes she is washing on a cement slab.

This year's monsoon season is off to a punishing start

This year's monsoon season is off to a punishing start: Dozens of landslides and extensive flooding have left the Cox's Bazar refugee settlement — home to more than 900,000 Rohingya — battered and sinking into a vast sea of mud. 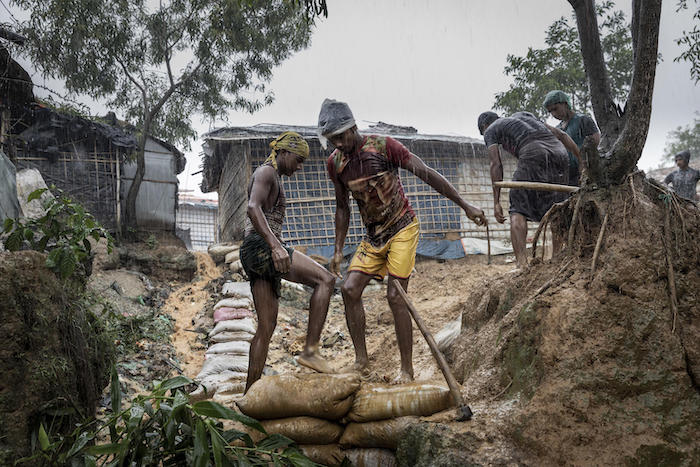 On July 6, 2019 in Bangladesh, two men reinforce a mountainside path in a flooded Rohingya camp in Cox's Bazar. © UNICEF/UN0325326/Brown

Some 273 shelters have been destroyed and many others partially wrecked by the heavy rains and floods. At least 11 people have been injured, including two children. Five UNICEF-supported child learning centers have been badly damaged and more than 750 partly damaged, interrupting learning opportunities for over 60,000 children.

More storms are expected, with four months of monsoon season still to go.

Our videographer @thomasnybo reporting on the damage done by the recent monsoon rains and floods in the #Rohingya #refugee camps. #AChildIsAChild pic.twitter.com/A4i2h8Gh33

UNICEF is on the ground, relocating families whose homes have been destroyed and providing the emergency supplies — including water purification tablets and plastic sheets — that families need to survive this latest challenge.

"As the rains continue, so does the risk of unsanitary conditions, and affected people —especially children — falling sick of waterborne diseases," said Berta Travieso, Acting Chief of UNICEF's Field Office in Cox's Bazar. "Ensuring that children and families have access to safe water and sanitation is absolutely critical to protecting them."

Education for over 60,000 children in camps and host communities is disrupted because of damage to UNICEF learning centers

UNICEF and partners have begun repairs to damaged shelters and water and sanitation facilities, and are working to reopen learning centers so children can continue their educations. Mobile medical and nutrition teams are ready to be deployed if needed to monitor the health situation of children and mothers in the camps. 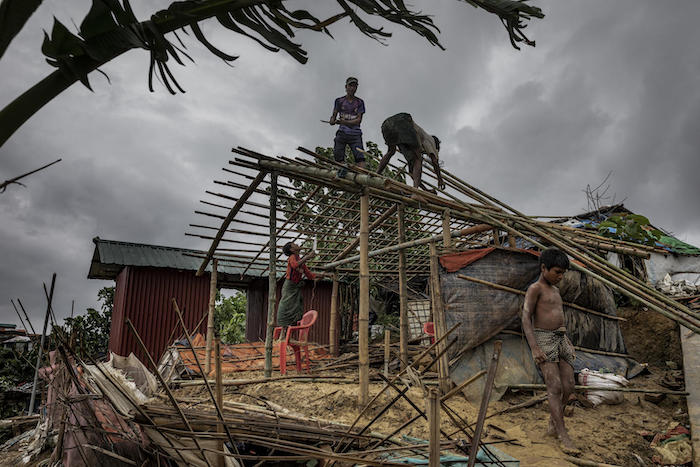 On July 7, 2019, men rebuild a house destroyed the night before by strong winds in Camp 18, part of the Kutapalong refugee camp in Cox's Bazar. © UNICEF/UN0325315/Brown

Chased out of Myanmar's Rakhine state by a violent ethnic cleansing campaign in 2017, hundreds of thousands of Rohingya escaped to Cox's Bazar district in southeastern Bangladesh, effectively creating the world's largest refugee settlement.

For generations, Rohingya living in Myanmar have been denied citizenship. Until conditions are in place that would allow families to return home with basic rights — safety from violence, citizenship, free movement, health and education — the stateless Rohingya remain in limbo in Bangladesh.

UNICEF has already begun cleaning up flood water from facilities that are affected.

However, the situation in the #Rohingya #refugee camps may worsen as more heavy rain is on its way. #AChildIsAChild pic.twitter.com/QGsJ4w4lcC

"Conditions in the camps and host communities are deteriorating rapidly because of the brutal weather and the humanitarian needs are only likely to grow over the coming days with more downpour expected," said acting UNICEF Bangladesh Representative Alain Balandi Domsam.

More storms are expected, with four months of monsoon season still to come

More than 500,000 Rohingya children are in need of humanitarian assistance in Cox's Bazar. UNICEF has been on the ground since the crisis began, providing services and support to refugees and host communities. UNICEF has appealed for $152.5 million to support humanitarian assistance in Cox's Bazar in 2019. The current funding gap is $68.7 million.

Top photo: Nine-year-old Mohamed looks out over one of the canals running through Kutapalong refugee camp in Cox's Bazar, Bangladesh on July 6, 2019. Two bridges nearby were swept away by heavy monsoon rains. © UNICEF/UN0325324/Brown